Learn about Energy Star Buildings and Certifications
To view the best rates in your area, start by entering your zip
×

The U.S. population is about 319 million people, and it’s projected to reach a whopping 400 million by 2051. As our population grows each year, so does our impact on the environment in a number of dramatic ways. Americans’ increasing need for energy is certainly an environmental hurdle we will need to jump over.

Fortunately, there are existing programs that encourage people and companies alike to reduce their energy consumption. One primary example is Energy Star, which is administered by the EPA and provides guidance and certifications to companies demonstrating a desire to control and reduce energy usage.

Energy Star certification* is awarded to any building that demonstrates a significant reduction in energy use when compared with other structures of the same type. A byproduct of certification is reduced utility costs through decreased energy consumption and a reduction in pollution emitted by the same cause. These benefits are a win not only for the companies that achieve certification but for the environment and world population as a whole.

The following project focuses on Energy Star certifications for commercial buildings that represent a major segment of energy use in this country. Using this data, we were able to determine trends in different building types, corporate objectives, and other variables.

So who’s doing their part to reduce energy consumption in the U.S.?

While most any building can be certified, it’s office buildings and K–12 schools that make up most of the list. Office buildings benefit from Energy Star because they are some of the largest in the country. Even modest energy savings are worth a fortune for a 3- to 4-million-square-foot skyscraper.

Schools may be a lot smaller, but they’re no less grateful for lower utility bills. Many of the school systems that frequently certify buildings are public schools. Because they operate off a tight budget consisting primarily of taxpayer dollars, they often adopt a strategy of proactive cost reduction in order to free up money for other projects, making them ideal Energy Star candidates. 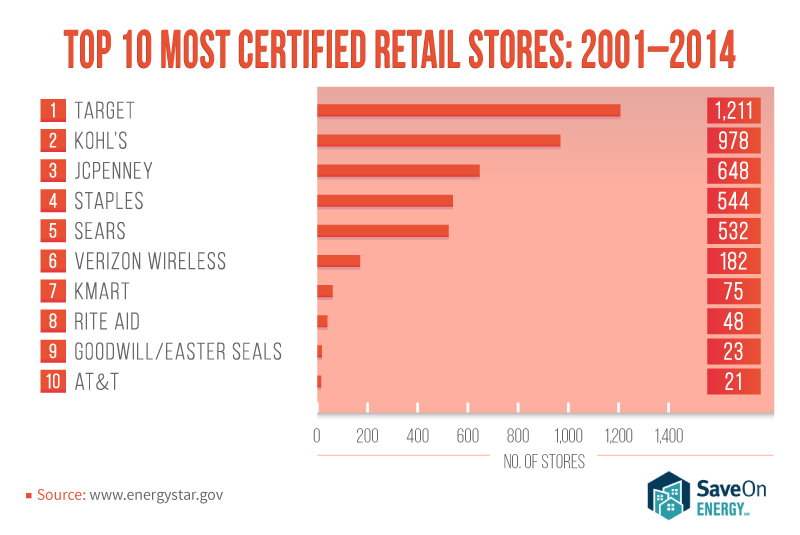 A few businesses stand out as clear leaders in Energy Star certification in just about every building category. The most remarkable numbers present themselves in retail, including the food retail industry; many companies on this list have received special recognition for their efforts by the EPA. For these companies, Energy Star certifications are part of an overall plan that includes objectives such as reducing waste, supporting sustainability, and improving efficiency. 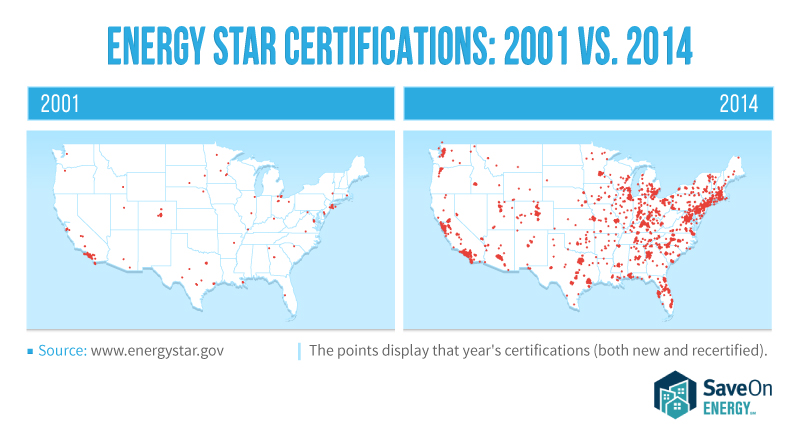 The growing list of qualified buildings has eclipsed the 26,000 mark. Still, millions of commercial buildings in the U.S. have yet to be certified; however, it’s highly likely that the number of uncertified buildings will continue to decrease as other companies observe the financial and environmental benefits associated with the Energy Star seal.

*A certification shows that a company met all Energy Star’s requirements for the year in which it submitted its application. The organization may forever claim that its building was certified in that year; however, it will likely want to continue recertifying each year to reinforce its energy efficiency. Companies may submit certification requests as soon as one year after their most recent certification was issued, but they will not be reviewed until the start of the next calendar year.