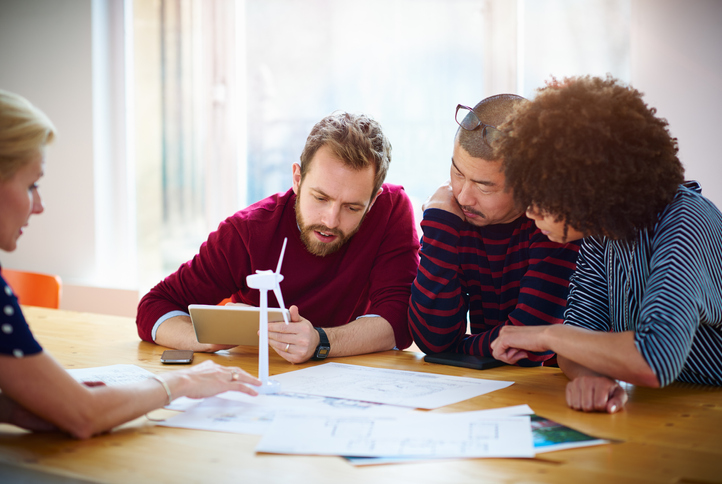 These days, the conversation on energy oscillates between renewables and traditional fossil fuels. Reports discuss dropping wind and solar prices alongside oil and natural gas investment. But these aren’t the only energy technologies available. Increasingly, scientists are coming up with innovative solutions to the world’s growing energy needs. Let’s take a look at a few carbon-free options that may be coming to a place near you sooner than you think.

Snow in the sky with silicone

From a team of UCLA researchers comes a way to generate electricity from snowfall. The official name for this new device is a snow-based triboelectric nanogenerator, or snow TENG for short.

The snow TENG works by harnessing the positive charge that snow already carries. The technology is made of negatively-charged silicone, which, when put in contact with snow, creates a capturable electric charge.

The snow TENG is inexpensive, small, and flexible. It also works in remote places, because it creates its own power. For the 30 percent of the earth that is covered in snow through the winter months, a snow TENG could be an alternative to solar panels, which are ineffective in snowy conditions. An added bonus? It can also be worn as a monitor to assess winter athletes’ performance. Winter Olympics, here we come.

Oxymorons to the rescue

Professor Rob Morgan from the University of Brighton has perfected his CRYOBattery, which stores liquefied air at -385 degrees Fahrenheit. Liquid air? Yes, you read that right.

The CRYOBattery provides a storage option for excess wind power, since liquid air can be heated and turned back into gas to drive turbines when electricity demand spikes.

“Think if you had a weight on a piece of string. If you wind it up on a wheel and let it go, you’re releasing potential energy. What we’re using in the CRYOBattery is using the difference in temperature between the liquid and air temperature to store potential energy,” Morgan told The Argus.

Morgan also says it is cheaper and more scalable than conventional batteries. The project has gotten a lot of attention – in the form of a 46-million-dollar investment – from a Japanese machinery company. It’s already in motion in England, where a plant is gearing up to power 50,000 homes with CRYOBatteries.

A window to the sun

All windows let sun in, but not all can turn that sun into energy. Startup Ubiquitous Energy has proposed a new material that could turn average windows into solar panels, without the signature blue hue so associated with the solar panels of today.

The company, operating out of Redwood City, California, developed Clearview Power windows with transparent solar cells so they look as clear as regular glass. The windows are coated with an organic dye capable of absorbing the sun’s infrared rays.

“Light absorbing dyes are found all around us. They’re in paints, they’re in pigments for clothing, and they’re even in electronic devices. What we’ve done is we’ve engineered those dyes to selectively absorb infrared light and also convert that light into electricity,” Ubiquitous Energy founder Miles Barr told CNN.

The dye can be applied to windows, car glass, and even iPhone screens, explains Barr, and can fulfill California’s mandate that every new home use some amount of solar power. It is less efficient than a traditional panel and because of this Ubiquitous Energy recommends it be used as a complement to traditional solar power.

That said, Clearview Power windows still produce about two-thirds the energy of traditional panels at just 20 percent more than the cost of regular windows. With a little luck, this not-so-colorful idea may soon be coming to skyscrapers across the country.

In Florida, the search for alternative energy sources has led OceanBased Perpetual Energy founder Nasser Alshemaimry under the sea. In partnership with Florida Atlantic University, is exploring the world of current-based hydropower.

The project tested five types of turbines 80 feet underwater in the Gulf Stream, measuring each model’s electricity generation to find the one that performed the best. With a winner now in view the team is looking at a $16 billion project to produce 5 gigawatts – that’s 5 million kilowatts – of electricity from the power of Gulf Stream currents.

Current-based hydropower is similar to wind energy, except it uses the force of the ocean to turn turbine blades instead of wind. This makes it more predictable than wind, solar, and even more common tidal-based hydropower projects.

According to marine scientists, small numbers of underwater turbines won’t harm marine ecosystems. Though repairs are more challenging, and costs remain high, its stability is reason to believe current-based hydropower could be a realistic complement to other carbon-free electricity generators.

Jenna is a writer covering the environment and energy industry. She is a Massachusetts native and graduated from the University of Massachusetts Amherst with a bachelor’s degree in journalism and French.