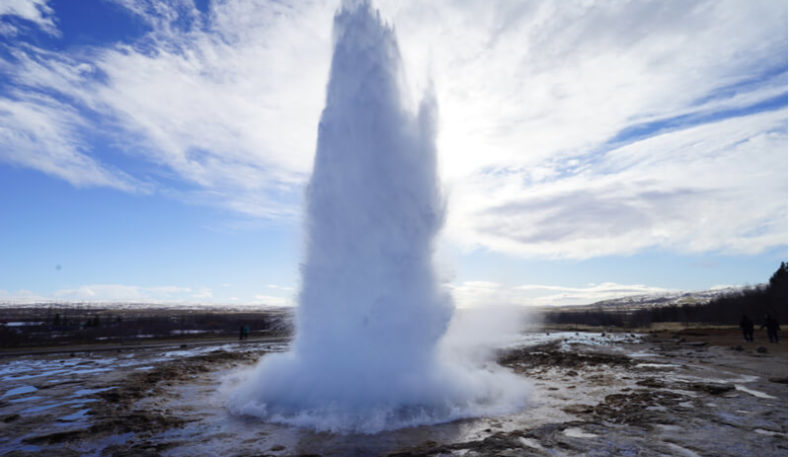 This is the fourth part in a SaveOnEnergy series discussing the ins and outs of different forms of renewable energy. Come back next week for part five.

Wind, solar, and water are all forces of nature that can provide renewable energy, but did you know we can also draw power from the earth itself? We call this geothermal energy – a power source collected from below the Earth’s surface and transformed into electricity. While this form of renewable energy might be more obscure than solar or wind power, it was once the most common green power source in the country.

So, how do we turn energy within the earth into electricity? Read further to learn the basics of geothermal energy.

What is geothermal energy?

Geothermal energy is very hot water and steam collected from underground reservoirs. This energy is contained within the rocks and fluids beneath the Earth’s crust and reach as far as the magma layer.

To reach the geothermal energy, producers dig wells to bring the hot water and steam to the surface. Some reservoirs are shallow and don’t require a lot of drilling, while others are several miles below the surface. Geothermal energy can be used as electricity to power your home, as well as heating and cooling buildings.

The U.S. is the largest producer of geothermal energy in the world, with most geothermal reservoirs located towards the west coast. Perhaps the most well-known location for geothermal energy is simply referred to as “The Geysers” in California. This 117-square kilometer geothermal field is formed by 22 power plants and an installed capacity of more than 1.5 GW.

However, there are a few ways to go about this process. There are three types of geothermal power plants:

Dry steam plants. This is the oldest form of geothermal technology. Dry steam plants remove steam from the fractures in the Earth and uses it to power a turbine.

Geothermal energy and the environment

That being said, geothermal does have its drawbacks. While geothermal power plants don’t emit carbon dioxide, they have been linked to other types of emissions, such as sulphur dioxide and hydrogen sulphide – a gas that is known for smelling like rotten eggs. There are also concerns over the disposal of geothermal fluids, which could contain toxic materials (albeit in very low levels).

Additionally, constructing and maintaining these power plants does impact the environment where they are located. Building large-scale power plants can permanently affect nearby ecosystems. However, many point to the positives – such as the fraction of carbon emissions – as outweighing the drawbacks.

Can geothermal energy power my home?

It depends on where you live. Geothermal energy is commonly known as the most location-specific form of renewable energy because power plants need to be near the underground reservoirs. With most of the country’s geothermal plants located on the west coast, it may be difficult for consumers in other areas to have access to this form of energy.

However, there is hope for consumers who don’t live near a geothermal power plant. Geothermal heat pump (GHP) systems can provide energy from below the Earth’s surface and power your home or business. This option is becoming more popular in areas that wouldn’t typically benefit from geothermal power. For example, according to the U.S. Department of Energy’s 2009 report, Texas was one of ten states responsible for more than half of the country’s total GHP shipments.

The good news is this – there are many other green energy options to choose from. Whether it’s solar, wind, or another renewable power source, there are plenty of ways you can opt to reduce your environmental footprint through the energy powering your home.

The following are the other entries in the series: