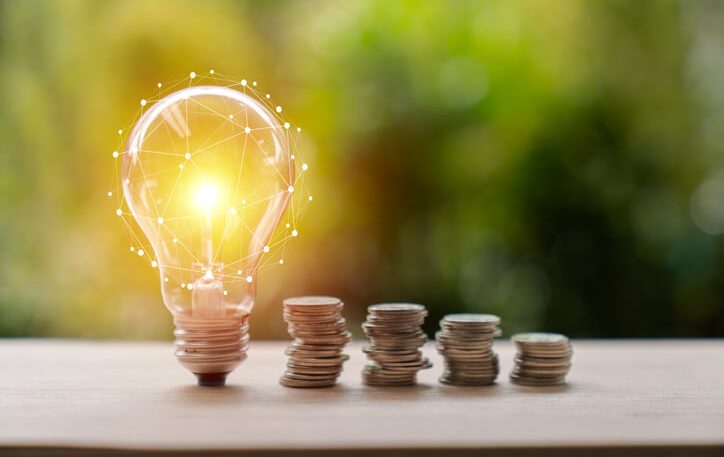 If someone offered you $50 for simply unplugging your electronics when you weren’t using them, would you do it? What about $100? Or even $500?

That’s how much of your money could be going out the literal window if you aren’t taking advantage of these energy-saving tips and tricks. Find out how to save up to $500 per year — or more! —  with these easy home electricity hacks.

Based on data from Energy Star, we surveyed U.S. homeowners and renters to see how many people are maximizing their energy efficiency. Energy Star is a “government-backed symbol” representing thousands of organizations. The U.S. Environmental Protection Agency (EPA) has partnered with Energy Star to boost energy awareness.

And, as it turns out, many Americans (up to 50% in some cases) could fiscally benefit from simple changes. Keep reading to see where you can make small modifications with big returns.

Do you live in an older home? Do you notice drafty areas in the winter or find it hard to keep your living environment evenly cooled in the summer months? Then this next tip is for you.

According to the Department of Energy (DOE), homeowners can typically save up to $200 per year by sealing their homes and adding insulation. And the good news is that these types of repairs can be made by yourself with caulk or even window film.

So how many people have taken this step to close off cracks or seams in their home? Our survey found that less than 35 percent of respondents had recently updated their home’s insulation. Even residents in colder climates of the northeast US states did not close off cracks and seams nearly 60 percent of the time.

Put this home DIY on your to-do list before peak summer temps get here. 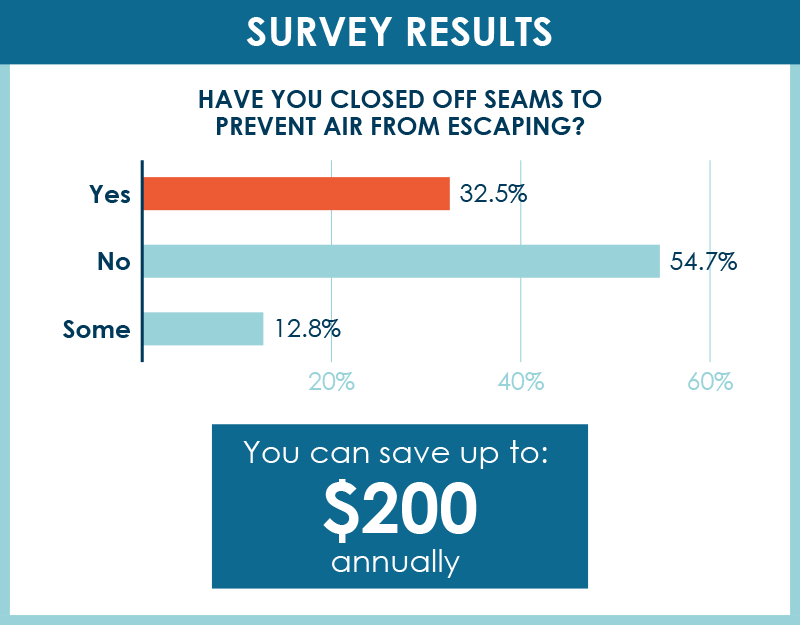 The average household has 45 light bulbs. According to the DOE, the average household’s lighting accounts for five to 10 percent of its electricity use. But if you’re still relying on old incandescent bulbs, you might be making a “glaring” mistake. Here’s why:

The incandescent bulb gives off 90 percent of its energy as heat. Switching to LED (Light Emitting Diode) or CFL (Compact Fluorescent Lamp) bulbs are much more energy efficient. Not only do they save 75 percent more energy, but they save you money as well.

For instance, a traditional 60-watt bulb found in your kitchen would cost you about five dollars yearly (if you kept it on for two hours per day). However, the equivalent LED or CFL would only cost roughly $1 per year. Take a look at this chart to see how quickly those savings can add up for you:

In 2007, Congress passed the Energy Independence and Security Act, which requires all standard incandescent bulbs between 40 to 100 watts to be phased out. Of course, plenty of these types of bulbs still exist in homes throughout the U.S.

So, switch out those outdated incandescent bulbs in your home to start saving ASAP. As we found in our survey, many Americans have delayed cashing in on these savings by keeping old lightbulbs in their homes.

Homeowners and renters in the southern region of the U.S. were the most behind in updating their lighting. On the flip side, the younger generation were the rising stars in this category, with over 60 percent of respondents aged 25-34 years old having replaced their bulbs with energy savers. 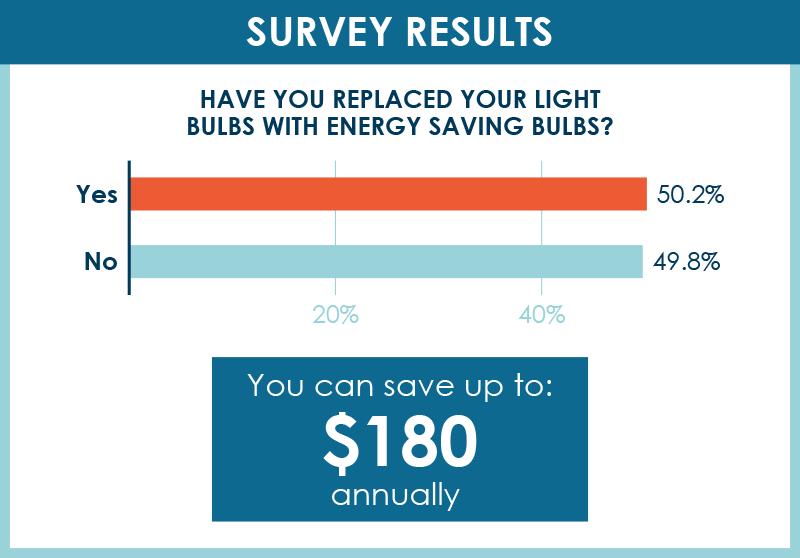 Shut down your computer

Slamming your laptop closed at the end of a long day can be a satisfying way of saying, “I’m done!” But if your computer is still running, then your energy losses might not be.

Many of us perpetually put our computers in sleep mode and only turn them off when we need to reboot. But sleeping computers are still using power. According to data from Lawrence Berkeley National Laboratory, desktops use almost 75 watts when they are left idle and 21 watts when put to sleep. Notebooks use about 16 watts when they are asleep. If your household has two or more computers, that number begins to add up.

In our survey, this is one area where most people could start saving immediately since only one out of every three people shut their computers off when they are not in use. 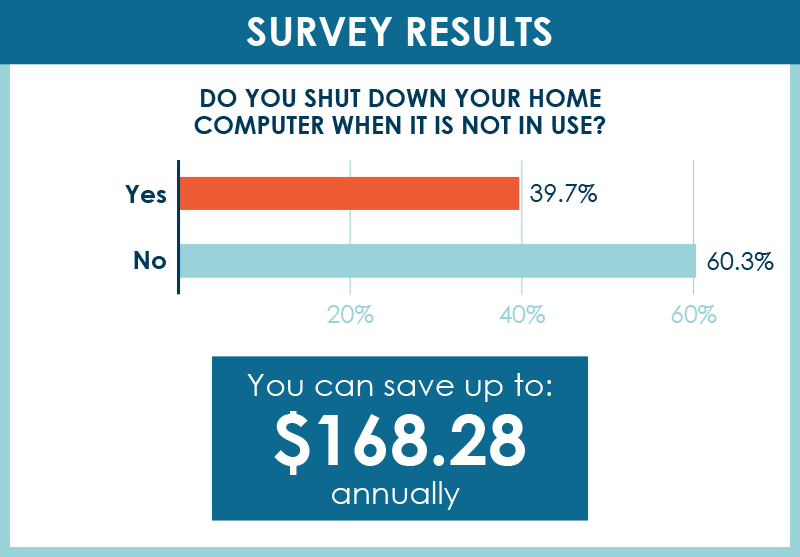 Similar to computers, many other appliances are still working even when not in use. This is called “standby power.” Standby power is the minimum power used when something is plugged in. For instance, even if you aren’t using your microwave to heat food, it is still drawing energy to power other functions, like a digital clock.

Aside from the furnace in your house, a laser printer draws the most standby power in the house at 131.07 watts, which comes to about $131 for the year. We highlight this statistic because unplugging the printer was the least-taken energy-saving action of all our survey questions. Only 14 percent of respondents unplugged their printers when not in use. 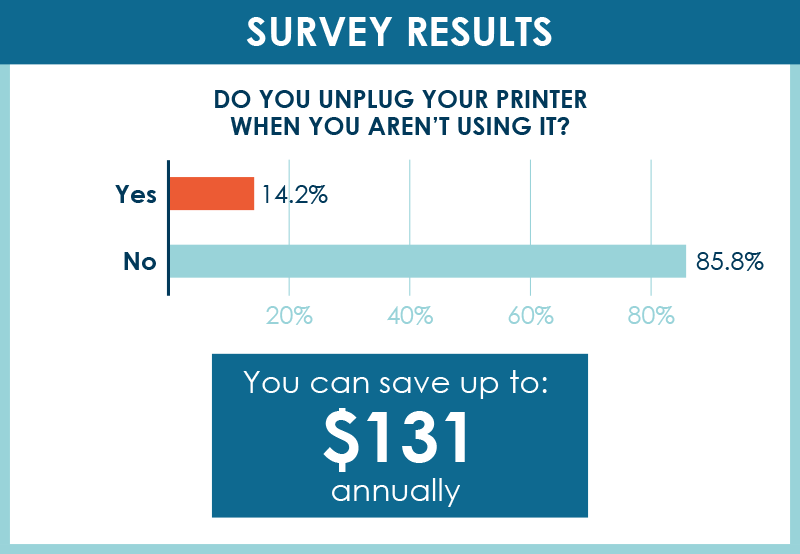 By now, the proverbial lightbulb in your head has probably lit up when thinking about how much money you could be losing out on by ignoring your home’s energy efficiency. To learn about other energy waste around the typical home and more ways to save, check out this helpful infographic. 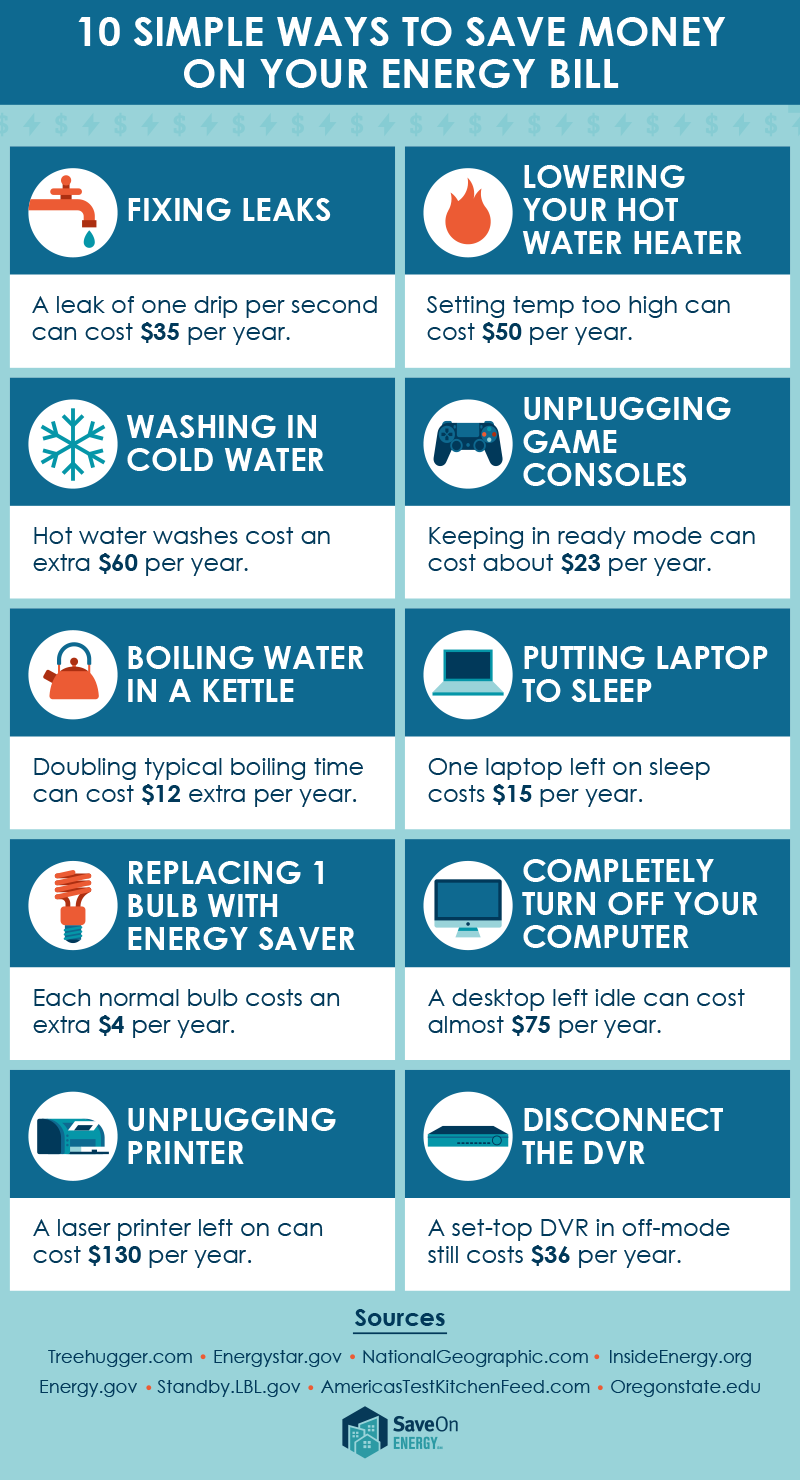 Calculating exact monetary values from energy savings is never an exact science. There are always several factors to consider when you look at state-by-state energy costs and usage variability across different times of the year. However, one thing is for certain, by using less energy, no matter how small, you are saving money.

Flipping a single light switch off may seem like a meaningless task for one person and one light bulb. But these types of small actions multiplied by the millions of households in the nation can add up. Learn about the ways energy sources power your home at SaveOnEnergy and choose the best fit for you.

We surveyed 1,000 Americans per question listed above using Google Surveys to compile the results. Of the respondents, 47 percent were female and 53 percent were male.

Lisa Iscrupe is a content writer and editor who specializes in energy, the deregulated electricity market, and solar power. Her work has been referenced by CNN, The Daily MBA, The Media Bulletin, and other national sources. You can find more of Lisa’s work at SaveOnEnergy.com.