What to Look For When Buying a Ceiling Fan

Written by The SOE Team 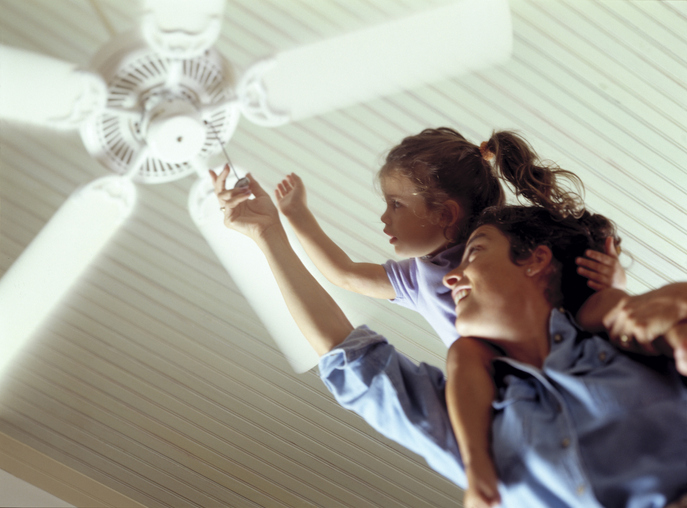 You’ve probably read many times that using a ceiling fan in a room saves energy and money. The wind chill effect fans create mean most people can raise the temperature on their air conditioner by 4 degrees without noticing any difference in their comfort level. This saves almost 10 percent on summer electricity bills, according to PPL Electric Utilities. There are several features to look for when buying ceiling fans. Read on to learn how to find your perfect cooling device.

One of the first things you notice when shopping for ceiling fans is that they’re sorted by . This refers to the diameter of the circle the rotating blades make. The bigger the room, the bigger the fan you want. But how do you determine the best for your room? Many manufacturing sites offer charts to help you match the square footage of a room to the right diameter. In general, try these suggestions:

The number next to this acronym, which represents cubic feet of airflow per minute, is important. CFM represents the wind chill effect that makes people feel cooler. You generally want the highest CFM you can find for your appropriate fan so you can turn down the thermostat and save energy. A higher CFM may be the result of a bigger motor that requires more energy to run, but this is a very small expense compared to the cost of running your air conditioner. Look for at least 6,000-7,000 CFM for best results.

While fans are not as big an investment as a new air conditioner, you don’t want to waste money. However, it’s worth the expense to spend more money on a fan with higher CFM and a better motor. A bigger, better performing motor can help boost the CFM but also reduce noise and wobbling. Since this is a device that may be running for several hours a day, you want something pretty quiet. DC motors are considered the latest and most efficient in ceiling fan motor technology – and also the most expensive. Motors larger than 200 mm are more affordable but still considered good quality.

Blades are generally the first thing consumers look at on a fan. Whether you want sleek and rectangular mahogany blades or more traditionally shaped oak-colored blades, the number and angle of the blades is much more important to the fan’s functionality than their shape.

Many fans come with four or five or even more blades. Many people assume the more blades the more air moved, but in fact more blades create drag. Three blades, such as what you see on giant wind turbines, are most efficient, but four or five blades are quieter and more aesthetically pleasing to the eye.

The angle of the blades is also important. Anything less than a 12 degree angle is too flat to move air efficiently. Look for blades that are angled 12-14 degrees.