The Hidden Costs of Unused Electricity in Your Home

Garlic may ward off bloodsucking vampires, but it won’t scare off vampire energy. Vampire energy, or standby power, is the electric power that is wasted by the electronic devices plugged in but not in use.

We aren’t talking about chump change, either. According to NRDC.org, Americans spend roughly $19 billion on inactive electronics or devices every year.

If your phone charger is plugged in with no phone attached, or you’ve ever left the TV on in another room, you’re going to want to read our guide. We’ve compiled all you need to know about the electricity-wasting vampires that could be sucking funds from your pockets year-round –from which rooms typically contain the biggest culprits to the cost differences between devices that are asleep, idle, or completely off. Continue reading to see what we discovered.

Electronics are constantly changing. In fact, you no longer have to visit the theater to watch a movie in 3-D; the TV in your living room right now might be able to produce the same effect. You don’t even need to hire a photographer anymore; instead, your own smartphone could be capturing pictures comparable to those of high-quality cameras. And with upgraded coffee makers steeping top coffee brands and brews, who has time for a Starbucks or Dunkin’ Donuts drive-thru?

This persistent improvement of technology is driving consumer interests and purchasing behaviors. More and more gadgets are making their way into our homes, which means more and more to plug in and forget about. The unconscious effect of all these devices, though? A rising electricity bill.

Take a moment to look around your home. Which room has the majority of electronics plugged in but not being used? The answer is probably your living room. According to our research, the average living room contributes over $117 in lost money annually due to idle, unused technology –which includes the ones that aren’t even on. The biggest offender could be your cable box. Even when you turn it off with the remote, it may still be costing you more than $48 a year when not in use.

Other rooms you may want to “stake” out for unwelcome energy vampires? If you have a home office equipped with a desktop computer, cable modem, or even audio equipment, you could be losing close to $59 a year on devices you think aren’t costing you money. Even when you think your laser printer is off, the amount of energy it used in standby mode could be costing you money around the clock. 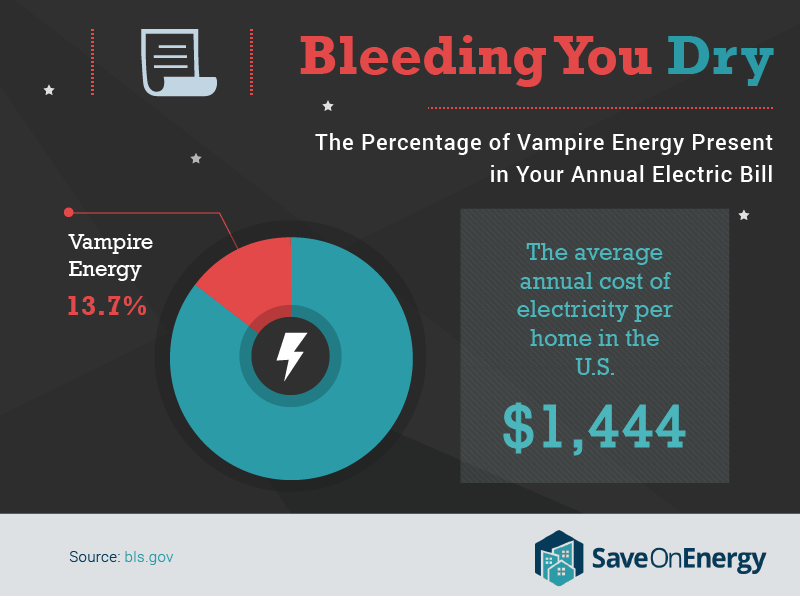 So what does this mean for your wallet?

The cost of keeping the lights on in your house largely depends on where in the country you live, and although those costs have largely been decreasing in recent years, wasted electricity could still be costing you more than you realize.

According to the U.S. Bureau of Labor Statistics, the common American spends an average of $1,444 annually on electricity costs. Roughly 14 percent of that expense is attributed to vampire energy. While overall electricity costs are decreasing, the amount of wasted energy is up from 2015, where vampire energy was to blame for “5 to 10 percent of an average home’s energy use.”

This means in recent years, the average American family appears to have almost doubled their standby power costs, throwing away an estimated $197.49 on unused energy each year. What could you do with that extra cash? Put it into your savings, use it for your next family vacation, or even invest in your own small business. 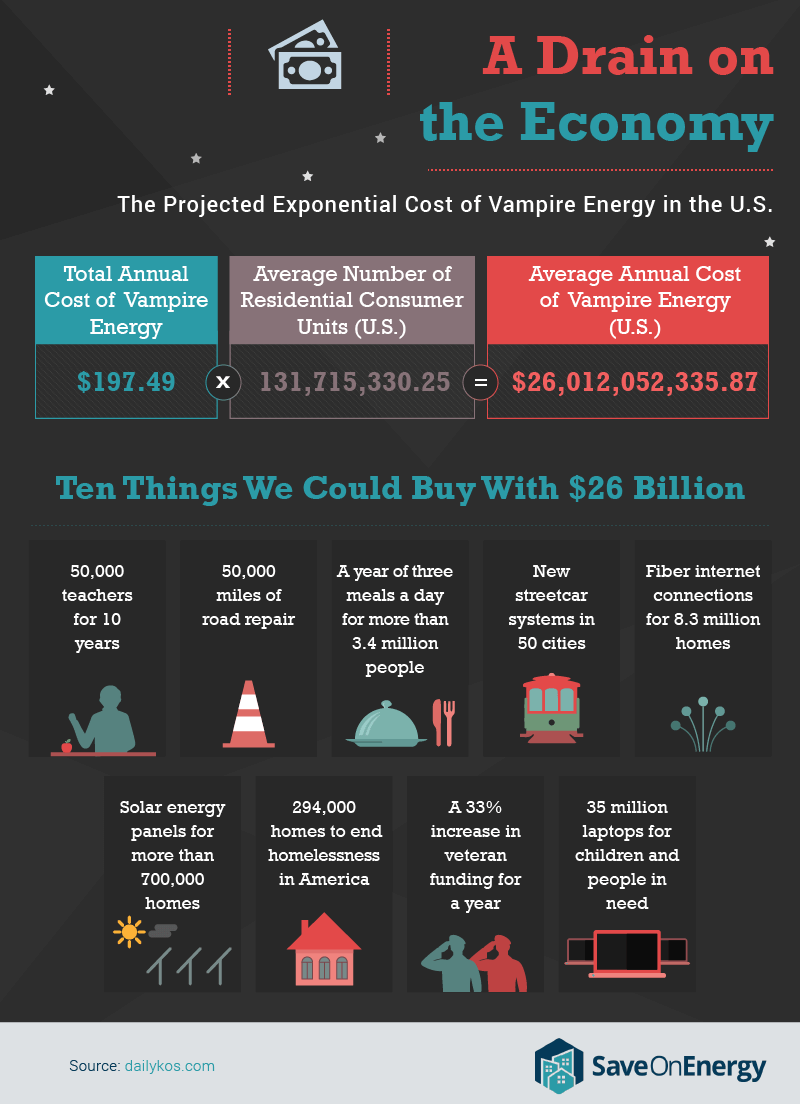 The cost of vampire energy in your home may only amount to $200 a year, but imagine that cost spread across every home, neighborhood, and state. With an average of almost 132 million residential consumer units in the U.S., that’s over $26 billion wasted on vampire energy.

With proposals to reduce or eliminate the budgets that fund programs like debt forgiveness for Americans with student loans, affordable housing for low-income Americans, and even legal services for those in need, that $26 billion could have far-reaching effects. Our chart displays just a few of the things the U.S. could invest in if people were more aware of vampire energy.

If we saved the average annual cost of vampire energy, that money could be used to employ 50,000 teachers for 10 years, or to perhaps increase the salaries of teachers in states where earnings are less for the crucial task of educating our children. As well, $26 billion could be used to buy 35 million laptops for kids and people in need or feed more than 3.4 million people three times a day for an entire year. Today, 7 million Americans experience hunger every day, a rate that has yet to decrease since 2010 after the recession.

What This Really Means for You

Our vampire energy calculator has the potential to help you see which devices are costing you the most. Using this tool, you’ll have a better understanding of exactly how much of your money is wasted on the electronic devices you don’t use.

The calculator uses the location data you input in addition to the information we’ve collected about the average expenses typically incurred by a home or apartment and various electronic devices, including your computer, television, and even cable usage.

Try our vampire energy calculator for a better idea of what you can do to reduce wasted electricity and save for future expenses.

If you think devices in low-power mode or standby aren’t using up electricity –think again. Even when you aren’t using certain common household electronics (including your computer, cable box, and video game system), they can suck up power as long as they’re plugged into the wall. While the energy usage may be reduced for some gadgets, others utilize nearly the same amount when not in use. Our chart above displays ordinary devices that use vampire energy and their average annual costs.

According to our research, digital set-top cable boxes with DVR cost homeowners the most, even when the TV is off and they’re not recording anything: averaging roughly $50 annually. Other set-top cable boxes proved to be vampire energy culprits as well, with average annual costs ranging from roughly $17 to $40 each. Sleeping desktop ($23.48) and notebook ($17.53) computers were also energy drains.

Devices costing you the most even when they’re completely off? CD players, audio receivers, and DVD players all sink their teeth into your wallet just by being plugged in.

What You Can Do About It

Don’t let all that doom and gloom about wasted energy get you down. The good news is that reducing vampire energy isn’t difficult. There are four primary recommendations provided by the U.S. Department of Energy to help you cut back on waste and pocket a little extra cash at the same time:

If you want to do more, we’ve got a few extra recommendations to truly make your home energy efficient.

If your air conditioning is running while nobody’s home, that could be costing you big. Make sure the AC is powered down when you leave for the day or consider investing in a smart thermostat to do the heavy lifting for you. In the office, make sure your computer is set to sleep mode after a certain period of idleness and go the extra mile by turning it off completely when you aren’t using it. In the living room, consider turning off any lights when you aren’t in the room, and plugging all of your devices into a power strip you can turn off when they aren’t in use.

No matter the appliance, if it’s plugged in, there are ways to decrease vampire energy and save money you may not have realized you were losing.

The average American spends 10 hours a day interacting with connected devices between their tablets, phones, computers, and gaming devices. Not including the major electronic devices and appliances that exist throughout most homes (like air conditioning, cable boxes, and TVs), there are plenty of opportunities for wasted energy – and money – in almost every room.

Even with ways to reduce the cost of vampire energy around your house, you still want to make sure you’re not overpaying for the electricity you need. At SaveOnEnergy.com, we’ve built an online marketplace where you can shop for electricity and natural gas for your home and office. Having the power to choose means finding an energy supplier that doesn’t just fit your usage but your budget as well. Visit us at SaveOnEnergy.com to learn more.

With data from the U.S. Energy Information Administration, we used the month-to-month cost of electricity (per kilowatt-hour), the number of residential kilowatt-hours sold month to month in each state, and the number of residential consumer units per state to calculate the average cost of electricity. To calculate the average cost of vampire energy in the home, we converted measurements taken by the Lawrence Berkeley National Laboratory to kilowatt-hours and multiplied for one day and then for one typical calendar year (365 days). We measured the most common mode each device was likely to be left in for the majority of the day unless otherwise noted.

Don’t turn off the computer just yet. Does this information have you dying to share? Feel free to share the images on this page freely for noncommercial purposes. But please give credit to the authors by linking back to this page, so your readers can learn more about this project and the related research.