Save Energy with your Refrigerator Choice | Save On Energy®

The Right Refrigerator Can Help You Save On Energy Costs

The Right Refrigerator Can Help You Save On Energy Costs 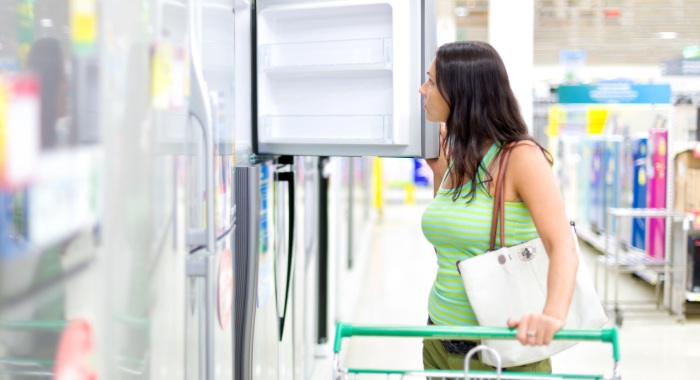 Although most people shopping for refrigerators are doing so either out of necessity or as part of a larger renovation of their entire kitchen space, taking the time to really shop around for the best refrigerator is something everyone should do. Refrigerators have a surprising amount of variation and have come a long way in terms of efficiency over the past few decades.

Considering that your refrigerator is the household appliance that often consumes the highest amount of energy – aside from your HVAC system – your model selection can have a marked impact on your energy expenditures.

The fastest way to cross a bunch of fridges off your list of possibilities is to figure out how much space you’re dealing with. Whether you’re looking to tuck your fridge into a small corner of the kitchen or have all the space in the world, you’re going to have different considerations based on the space available.

For example, smaller spaces may require a different door arrangement than traditional freezer-on-top models. Luckily, there are plenty of options out there. With measurements in hand, you’re ready to get going.

Obviously, your physical space limitations should be your primary concern, but once you’ve narrowed the field to what refrigerators will fit in the space you have, do a little mental math to determine your capacity needs. According to The Home Depot, you’ll need at least 10 cubic feet of fresh food capacity for two adults, and an additional 1.5 cubic feet for every additional mouth you’re feeding. Cnet.com recommends 4-6 cubic feet per resident. Either way, the numbers come out about the same for up to three people.

Efficiency is the name of the game

Major steps have been made by appliance manufacturers in making our homes more efficient. The old standards such as keeping the door of the refrigerator closed as often as possible and keeping it at the most efficient temperature setting are still good practices, but there’s more to consider! For example, some refrigerator designs with multiple doors help add to a fridge’s efficiency by preventing you from exposing the entire interior of the fridge to the outside when you go in for a snack.

In general, new appliances still beat out the ones that have been sitting in America’s kitchens for several years. According to EnergyStar.gov, buying a new ENERGY STAR certified refrigerator to replace your existing model that’s over 10 years old you could save up to $1,100 on energy costs over the appliance’s lifetime!

That’s a lot of money, and reason enough to purchase a new refrigerator for many.

Fitting your choice into your budget

The prices of a new refrigerator can be daunting, especially when considering one of the most efficient models on the market. Just remember, even though you may have to spend a little more money upfront for a refrigerator with vastly improved efficiency over your existing model, that initial investment will pay help for itself. Over time, as your energy costs are reduced each month you’ll recoup more and more of the price you paid to upgrade.

You may even be able to sell your old appliance to help pay for your new one. Even if it needs work, there are often people willing to purchase old appliances and repair them.

With these four tips in mind, you’re sure to find the perfect refrigerator to help your family Save On Energy!