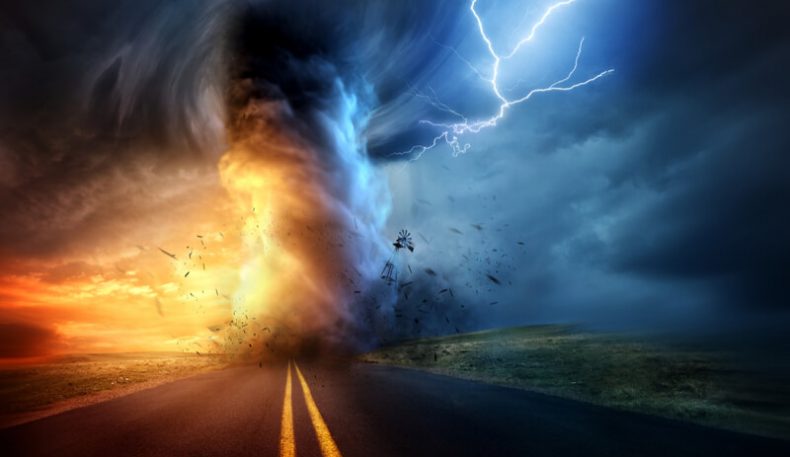 In the U.S., tornadoes can occur at any time. But they’re much more prevalent in April, May, and June. According to data from NOAA’s National Centers for Environmental Information, Texas has significantly more tornadoes than any other state, so it’s twice as important for residents to take safety precautions. One important factor to consider is maintaining electrical safety during tornado season.

Here’s what you need to know about how to keep yourself – and your electronics – safe during tornado season.

While tornadoes present a risk to you, your family, and your property, they can also cause electrical dangers. Power outages are quite common during and after tornadoes, according to Benjamin Kolo, owner of Mr. Electric.

“This can be caused by downed high lines, individual overhead lines, or a home’s service mast being damaged or knocked down,” he explains. “If you experience a power outage after a storm, remember best practices and proper placement of a generator, keeping carbon monoxide emissions in mind.” That’s because carbon monoxide poisoning can be deadly.

A storm can also cause a power surge, which can damage your electronics and appliances.

In addition, power surges create an added risk of electrical shock. “It’s an extremely rare chance of this happening, but avoid touching electrical outlets and plugging in new things if possible until after the storm passes, especially if lightning is present,” Kolo advises.

It’s natural to want to go outside and survey the damage after a tornado. However, this isn’t always a good idea. If you do go outside, Mark Dawson, COO of Mister Sparky, recommends staying at least 35 feet away from a downed power line.  “Also, avoid anything touching – this includes people – as you don’t know if it is energized or not. Assume all downed power lines are live.”

Another sign of downed lines could be the presence – or even the sound – of fallen trees.  Kolo recommends calling the utility company in this situation. “Again, don’t attempt to inspect downed lines yourself; stay inside because you have no idea whether those lines will still have power running through them or not,” he explains.

In addition, Dawson recommends shutting off electrical power, natural gas, and propane tanks to avoid the possibility of a fire, explosion, or electrocution – especially if you smell something burning. “Have a licensed electrician inspect your electrical system before powering up,” he advises.

If you smell gas or suspect a leak, you should leave your home immediately and contact the fire department. Dawson also recommends using a flashlight instead of a candle or torch to further limit the chance of a fire or explosion.

If you have a generator or charcoal-burning device, Dawson says you should not use them inside your home, basement, garage, or camper. “In fact, you shouldn’t use them even outside near an open window, door, or vent because without proper ventilation, carbon monoxide (CO) poisoning can occur.”

Preparing before the storm

There are also steps that you can take to reduce your risk of electrical problems. “Turn off and unplug electronics, computers, and TVs if a storm is on the way – especially if you don’t use a surge protector,” Kolo says. However, he recommends that you do invest in surge protectors for your electronics.

“People go through a storm, and then find an appliance or garage opener that doesn’t work afterward,” he says.  “This could be because during storms, high winds whip around the high lines against each other, causing voltage surges which can damage a home’s electrical appliances or devices.”

But if you have surge protectors in place, you can minimize the chance of this happening.  “There are options you can install yourself or consider hiring an electrical service professional to save time and stress,” Kolo says. “It’s also important to have nonperishables, batteries, flashlights, battery-powered radios, and other emergency items to be ready for potential outages.”

Another option is to move your overhead lines on your property underground. For this, you’ll need to hire a professional. “This can help protect them from wind damage and minimize electrical outage chances,” Kolo says. As an added bonus, the lines will also be protected from ice, heavy rains, and falling trees.  “Lines for any newly built developments are all put underground, but there are still thousands of lines out there above ground,” he explains.

Terri Williams is a freelance journalist well-versed in energy and other disciplines, with bylines at The Economist, USA Today, Yahoo, the Houston Chronicle, and U.S. News & World Report. Connect with her on Twitter or LinkedIn.