COP26: Green jobs are the future of work | SaveOnEnergy®

COP26: Green careers are the future of work

Talking about green jobs at COP26 What makes a job green? Is there a climate-friendly way to grow a business? What role should the energy industry play in the creation of green jobs? How can schools make sure students will have the skills to enter the green jobs market? Advice for people who want a green career 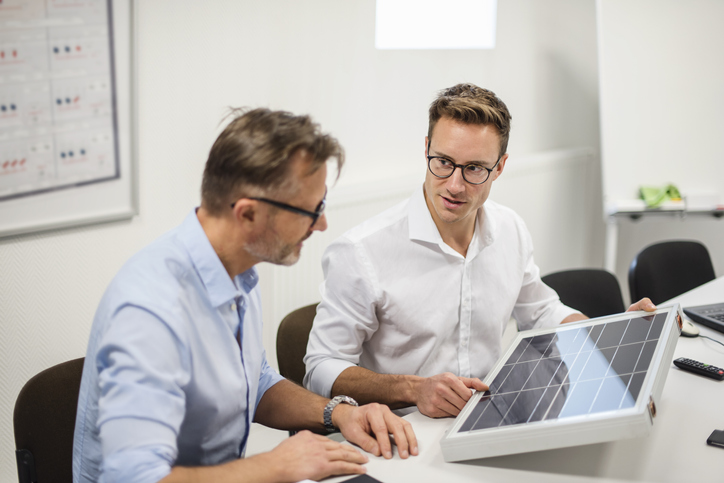 Talking about green jobs at COP26

Green careers are the trend of future job growth, according to this panel discussion at the UN Climate Change Conference. “So, you want a green career?” was a panel discussion among four individuals in the field and moderated by host Magid Magid, the founder and director of Union of Justice and OYW Ambassador.

According to recent reports, green jobs will create “24 million new jobs worldwide over the next decade” across various sectors, such as solar energy. Magid spoke with government leaders and entrepreneurs about what this means for the future of green energy and work.

The panel discussion was preceded by a recorded statement from the President of Colombia, Iván Duque Márquez. ” He noted that while Colombia doesn’t contribute a vast amount to worldwide carbon emission (as compared to other countries), it is vulnerable due to its location.

Marquez warned, “We are reaching global temperatures of 1.5 degrees. The limit temperature set in the Paris agreement for this century in order to avoid catastrophic consequences.” In response to this, he stated his country’s “commitment to reduce 51% of our global green gas emissions for 2030” and be carbon neutral by 2050. He also predicted that green jobs will make up 45% of the country’s labor market by 2050.

What makes a job green?

According to the Bureau of Labor Statistics, a green job is any line of work that is directly or tangentially related to producing or providing services “that benefit the environment or conserve natural resources,” as well as professions “in which workers’ duties involve making their establishment’s production processes more environmentally friendly or use fewer natural resources.”

What are green careers?

Burghart foresees a future in which nearly every job will be a green job in some manner because all lines of work will be “supporting the new economic environment in which conservation is a matter of course.”

Is there a climate-friendly way to grow a business?

Of course, scaling a large company, regardless of whether it is in the green economy, takes resources and therefore produces a carbon footprint. For example, Currie’s company, Too Good to Go, puts consumers in contact with reduced-priced food in their area that would otherwise go to waste. To date, the business has prevented 100 million meals from going to waste.

Currie’s current philosophy on ramping up his company is to “transition away from business as usual” into a new way of doing business that centers around “putting people and planet ahead of everything else.”

However, it is a fact that entrepreneurs worldwide do not have the same advantages and privileges. For example, a start-up may strive to be green and eco-conscious, but may not be 100% carbon-neutral while still making a profit.

To this point, Seifelislam pointed out that there may not be a perfect balance between ethics and price competitiveness. Her company, Kandaka Naturals, believes in ethical production, fair wages, and zero-waste packaging. These factors drive up production costs, making it difficult to compete with other businesses that offer lower prices and don’t have ethical manufacturing policies in place.

She believes the “uneven playground” should be leveled by businesses having “unanimous basic ethics” and that these guidelines should be government regulated. Furthermore, the tax system should subsidize ethically-sourced businesses.

COP26 panel host Magid pointed out that statistics show that “developing countries produce 63% of annual carbon emissions.” And while Seifelislam does not believe it would be fair to expect less economically developed countries to embrace low carbon jobs in the same manner as developed countries, she does think these up-and-coming countries can learn from their mistakes.

What role should the energy industry play in the creation of green jobs?

Enass Abo-Hamed, the co-founder of H2GO Power, recognizes that the energy industry contributes to greenhouse gas emissions. She said, “whatever we touch has a carbon footprint associated with it.” Therefore, it is unavoidable that green jobs may help and hurt the environment at the same time. However, she said we still need to focus on how “to create jobs associated with change.”

How can schools make sure students will have the skills to enter the green jobs market?

To ensure that today’s students will have the ability to sustain the green job market, Burghart offered a top-down approach. He said that businesses should communicate directly with education providers to let them know what skills will be needed in the future. He said young people need to know what jobs will be on the market in the green energy sector so that they can prepare ahead of time to make sure they can get those jobs.

Advice for people who want a green career

If you or someone you know is interested in a green career, the panelists offered some sage advice at COP26. Currie recognizes that more and more “young people want to do roles that have a social impact.” He said this generation of workers will continue to challenge themselves and the companies they use to be more sustainably-minded. He also stated that the emotional benefit of a green career is powerful and can give a person great satisfaction because they “are making an environmental difference.”

Burghart echoed this sentiment by recognizing that now “is a time of radical change. This is a time of enormous opportunity.” He said many organizations are trying to get involved with climate issues, so ”nothing should hold you back” if it is your desire to have a green job. He also promoted apprenticeships, or paid internships, as a way to enter this job market.

Abo-Hamed noted that while previous generations went to work to make a living, the current generation of workers will be working to continue to live on this planet. She said using your support networks, whether that be mentors and experts you meet through schooling or in a trade, is one of the best ways to access the green job economy.

However, Seifelislam did offer a word of warning. As more businesses realize that being green is trendy, greenwashing will become more ubiquitous. According to Sustain Life, greenwashing is “a deceptive marketing practice that involves unsubstantiated claims about an environmentally-friendly product or service attributes. To put it another way: Greenwashing is a ploy used by companies to trick customers into believing an organization’s products, services, or mission have more of an environmental impact than is accurate.” Seifelislam cautioned workers and consumers to use their “green glasses” when researching companies to determine if a business is truly eco-friendly.

Lisa Iscrupe is a writer and editor who specializes in energy, the deregulated electricity market, and solar power. Her work has been referenced by CNN, The Daily MBA, The Media Bulletin, and other national sources. Follow her at @lisaiscrupe.