How Long Do Tesla Batteries Last? 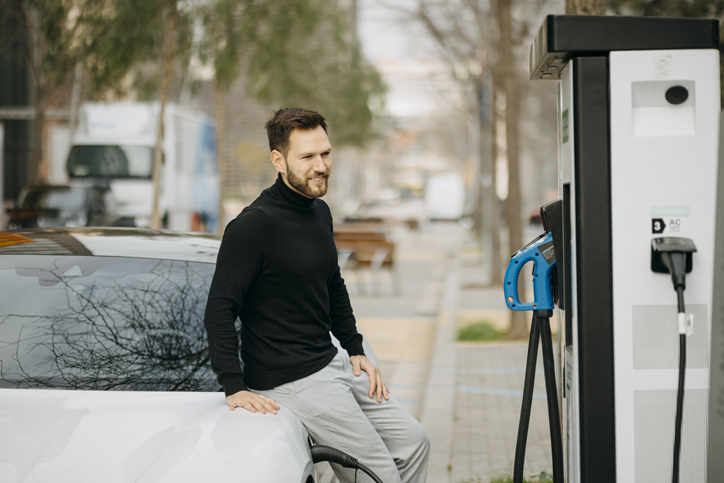 Tesla introduced most of its electric vehicle (EV) models to consumers over the last decade. A leader in battery quality and innovation, Tesla provides a robust range of vehicles to consumers. While its battery packs remain the best in the global EV market, there are a few important things to know about battery lifespan and the range of different Tesla models, when to replace a Tesla battery, and tips to maximize its lifetime.

Why is a battery important to electric cars?

An EV would not move without a battery. Unlike internal combustion engines (ICE) that run on gasoline, batteries serve as fuel for electric cars. Tesla is a pioneer of modern battery-run EVs. They have improved the battery to the point where it is now highly competitive with traditional gasoline-run cars. While other EV makers are manufacturing urban electric cars with a lower range than Tesla, you can, for example, drive Tesla’s Model S across the U.S. with less need to charge and with more access to fast-charging stations.

So far, Tesla is the only EV maker with high-powered battery technology. Designed to last between 300,000 to 500,000 miles, the company has given confidence to consumers that its cars can operate for longer than 10 years. In 2021, Tesla developed a battery that could reach one million miles. That is more than any of its existing models, or EVs from other manufacturers, currently offer.

The competition in the EV market is about one item — battery power. Presently, no EV rivals Tesla in terms of efficiency and longevity. Battery efficiency is the amount of energy you get from a battery relative to the energy put into it. Tesla batteries pack the highest energy density than any other EVs. The higher the energy density, the longer a battery can power the car in proportion to its size.

Your Tesla car battery gives the most bang for your buck because it is more efficient than the batteries of its competitors. That means your Tesla car has a longer range and distance. Tesla’s core efficiency rating, which includes kilowatt-hours (kWh), range, and weight, is just about maximum. As a result, Tesla cars use less energy per mile traveled and can go longer on a single charge than other EVs. The company has been further improving the density of its car batteries to achieve a longer range.

How and why do Tesla’s batteries differ between its car models?

Tesla offers different battery options for each of its models, and each offers unique features. For example, Model 3 and Model Y look similar, but have different costs. The Model 3 costs around $47,000, and Model Y is $63,000. The 2021 Model 3 Long Range gives you an 82kWh battery with a 368 mile-range. The battery of the Model Y Long Range is 72kWh with a range of 326 miles. The difference between the power and range between these two models comes down to the Model Y’s smaller battery and larger car size. Considered a compact SUV, the Model Y can accommodate more people but will go a shorter distance between charges than the Model 3.

In addition, the Model 3 can recharge faster than the Model Y. For example, a 15-minute recharge gives a Model 3 around 175 miles of range, while a Model Y gets only about 162 miles in the same time period. If your priority is the longer range and faster charging time, a Model 3 would be the best option between the two choices. But if space is more important for you, the Model Y fits the bill.

You will find differences in range, performance, power, and design across all four Tesla models. But they all offer higher ranges than most EVs on the market. 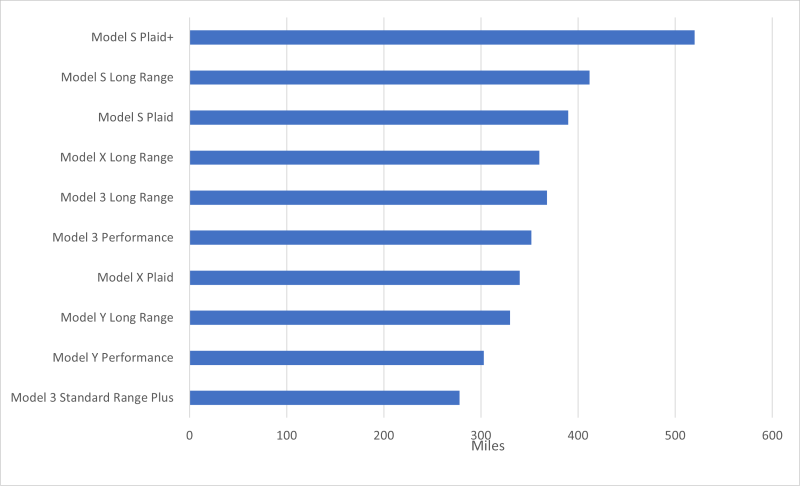 Do I ever need to replace my Tesla battery?

Like all electronic devices, such as cell phones and laptop computers, all EVs, including Teslas, will experience degradation of their batteries over time. It means that batteries will lose their capacity and range after years of use, which is one of the major concerns for EV buyers.

On average, EVs need to change batteries when they lose 20% or more of their range. By contrast, Tesla Model S and X batteries preserve around 90% of their range even after passing the 200,000-mile mark, according to the company’s 2019 report. Normally, a car is scrapped for recycling after 200,000 miles in the US. So, all Tesla models’ battery range and lifespan are more competitive than traditional ICE vehicles.

Are there any issues with Tesla batteries?

The overall quality of Tesla batteries is the best in the EV market. But there are reported cases of battery problems. For example, some Tesla owners complained about the accelerated battery degradation of their vehicles than they anticipated. According to Electrek, an electric transportation news website, Tesla’s 90kWh battery pack deteriorated much quicker than its 85kWh battery pack. Some EV experts believe it is because the company has altered the chemistry of the 90kWh battery pack, which may have accelerated its degradation rate. Tesla has not explained the discrepancy. Since the reports of degradation of the 90kWh pack, Tesla has been more focused on battery longevity.

To address battery degradation issues, Tesla includes it in its warranty. The warranty covers all battery capacity degradation in all its cars with a limit of 70% capacity for eight years. A Tesla battery is made up of four to five modules per car. Replacement of individual modules can cost between $5,000 and $7,000. If a warranty runs out, it can cost between $22,000 and $35,000 to replace a Tesla battery.

Many factors impact the longevity of EVs. How you use and take care of your Tesla will determine the battery life. Here are some tips to help it last.