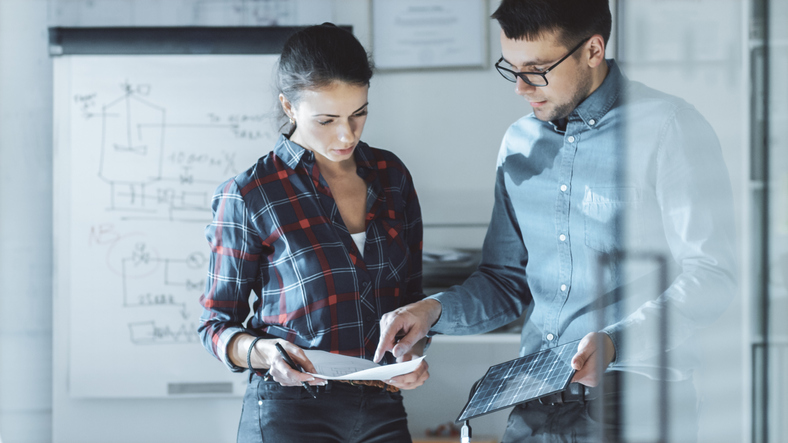 Alternating current is a flow of electric charge that regularly changes direction.

Direct current is a flow of electric charge in one direction.

Electric bill is a bill issued by a local utility company to a customer for the amount of electricity consumed within a specific period of time.

Energy consumption is the amount of energy used by individuals, businesses, and countries.

Electricity provider is a company that buys wholesale electricity from electricity generators or utility companies and sells it at the retail level to consumers.

Monocrystalline solar panels are made from many smaller solar cells, each made from a single silicon crystal wafer. They are some of the most efficient solar panels available today, with efficiency rates of 15%-19%.

Net metering is a billing mechanism that provides credits to solar system owners for the electricity they send to the power grid.

Photovoltaic (PV) solar cell is an energy technology that turns solar energy into usable electricity through a photovoltaic effect, which is a process that produces an electric current when a photovoltaic cell is exposed to sunlight. A PV cell uses a semiconductor, typically silicon, to interact with photons from the sun to produce electricity.

Photovoltaic effect is a process when a PV cell turns the captured sunlight energy into electricity.

Polycrystalline solar cells are made of multiple solar cells, each made of wavers of silicon crystals. Their efficiency levels range between 12% and 16%.

Power grid is a network of power lines used to deliver electricity to consumers.

Power purchase agreement (PPA) is a financial arrangement in which a third-party developer installs, owns, and runs a solar energy system on a homeowner’s property and sells solar power to the homeowner at an agreed amount.

Solar battery is a device that stores excess power generated by solar panels.

Solar cell efficiency is the amount of energy from sunlight that can turn into electricity through the photovoltaic process.

Solar financing is payment for solar panels with a loan from a bank or solar installer.

Solar inspection is an inspection of a solar energy system before and after installing solar panels by a qualified professional to ensure the system meets build codes, safety regulations, and proper engineering standards.

Solar installation is the process of installing solar panels, mounting structures, an inverter, and solar battery on a rooftop or ground.

Solar interconnection is a process by which a utility approves the connection of a solar generating facility to a central power grid.

Solar inverter is a device that converts the variable direct current (DC) energy produced by solar panels into alternating current (AC) for use in homes and businesses.

Solar leasing is when a customer leases solar panels and receives all the energy they produce without owning the panels. By leasing solar panels, a homeowner makes a monthly payment for the solar system and is eligible to receive all the power it produces.

Solar racking system, or solar mounting system, is used to support solar panels on any surface, such as roofs, building facades, or the ground.

Solar panel is equipment that gathers sunlight to be converted it into usable electricity.

Solar performance warranty ensures that the manufacturer replaces the underperforming panel if a solar panel degrades quicker than a manufacturer designed it for.

Solar permitting is submitting a solar system design and solar equipment plan to a local government and utility to obtain a permit to install solar panels on a residential or commercial property.

Solar power is the generation of electricity from sunlight.

Solar product warranty is a guarantee from a solar manufacturer that protects a customer against manufacturing defects and early wear and tear.

Solar rebate is a discount on solar equipment that is honored after completing the purchase.

Solar renewable energy credit (SREC) is a tradable and non-tangible energy certificate that solar owners can keep or sell to their utility through a broker. SRECs prices depend on where you live.