Who are the most eco-friendly Royal Family members? 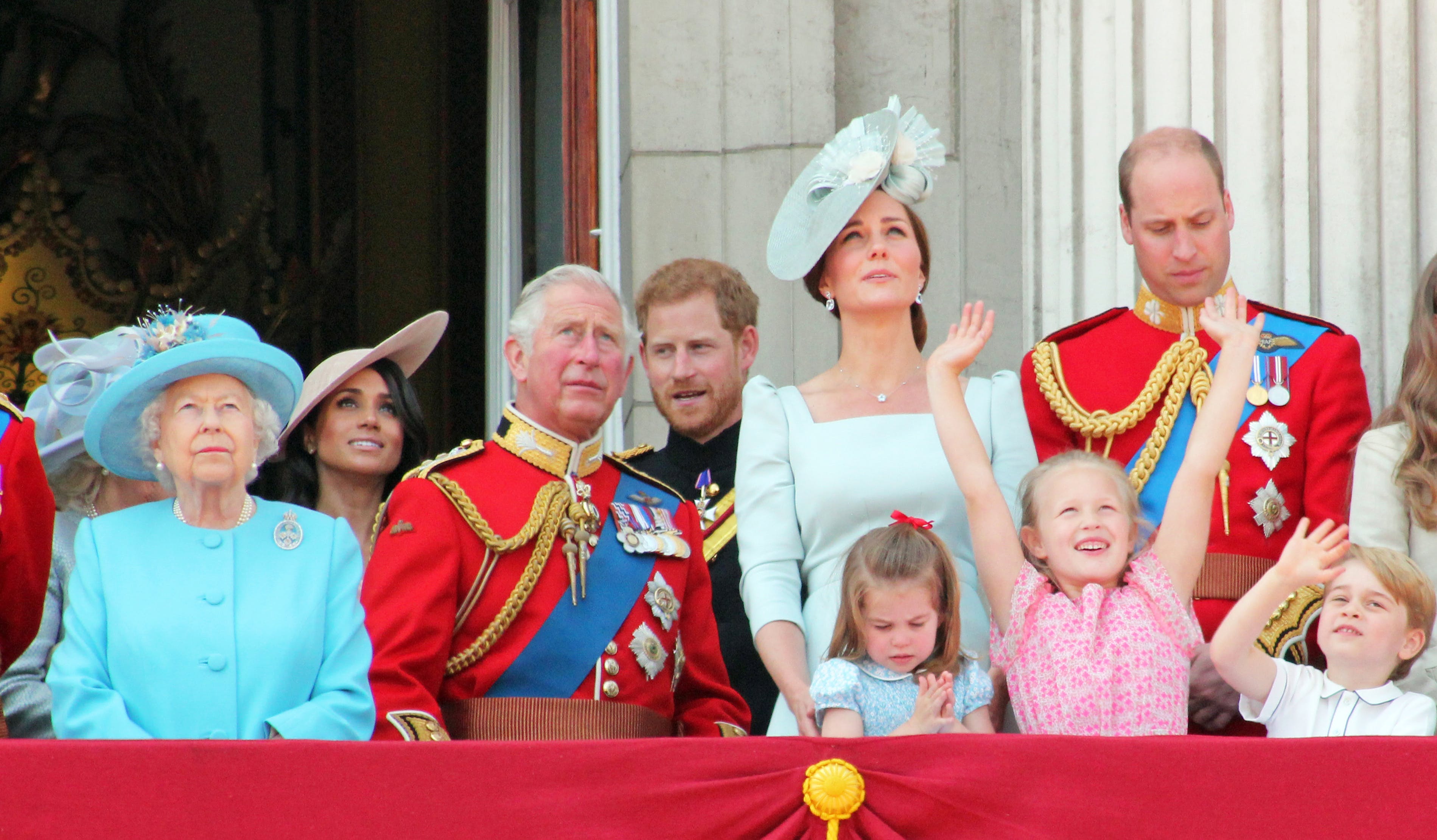 With mounting awareness of how our day-to-day life is impacting our planet, many of us are taking drastic steps to ensure we are reducing our carbon footprints and being as eco-friendly as possible. In doing so, many of the nation’s biggest names are finding themselves under the critical eye of the British public – and the Royal Family are no exception.

Intrigued to uncover how conscious royalty are of the environmental impact of their actions, we devised a points-based scoring system, ranking members of the Royal Family from most to least eco-friendly based on the following variables: their travel footprint, how many environmental charities they support, their attendance at environmental events, how sustainable their wardrobes are, how many of their social media posts cite environmental issues, and whether they use electric cars.

How does the scoring system work? 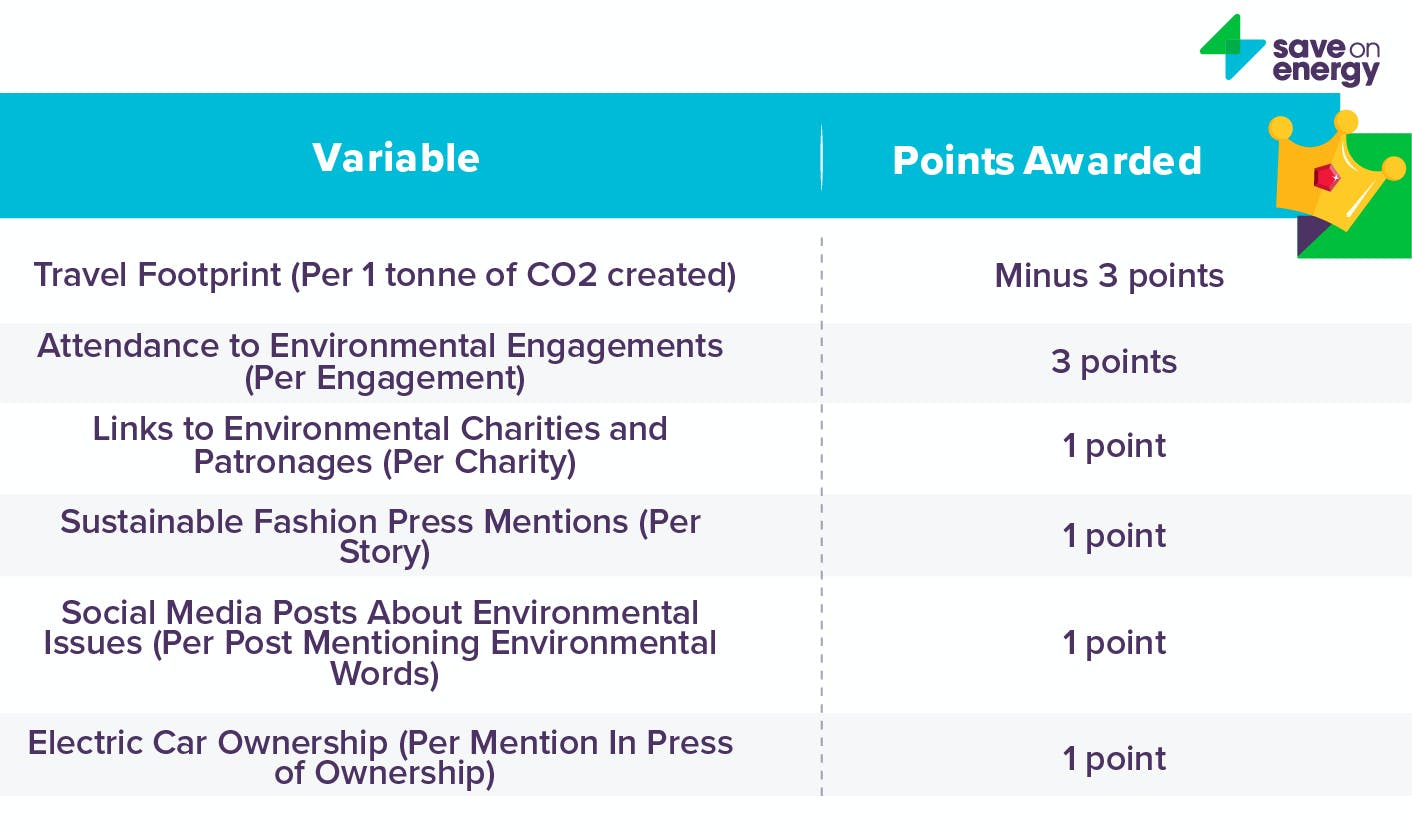 Who are the most eco-friendly royals? 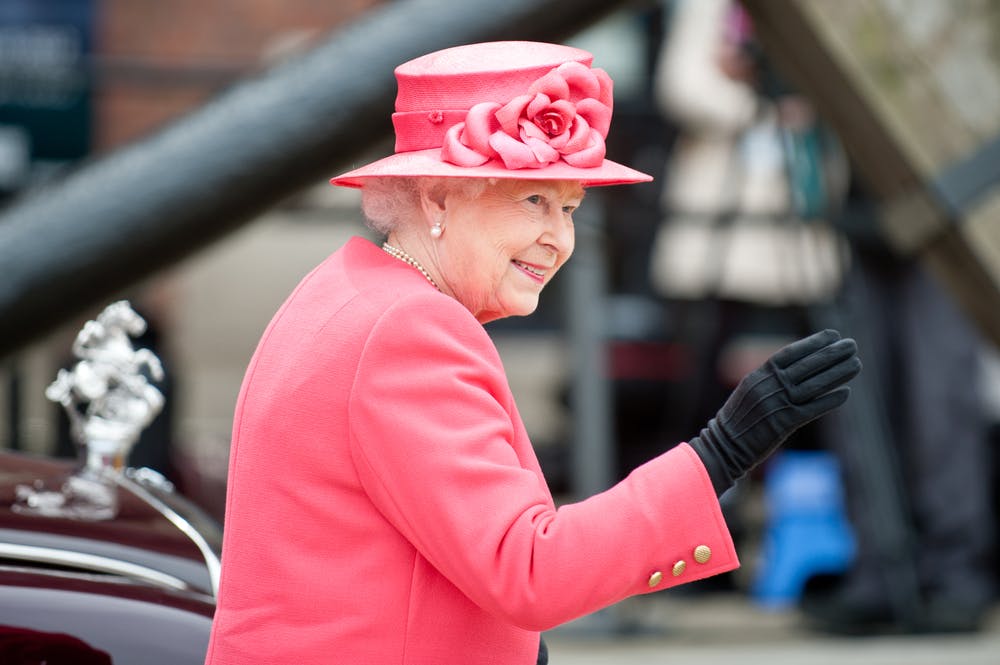 Our extensive study crowns Charles, the Prince of Wales as the most eco-friendly royal overall, with an impressive total of 156 eco-points, despite having the worst travel footprint of all royals! Thanks to his social media posts, his support of environmental charities and his attendance at environmental engagements, Prince Charles has scored himself the top spot as the most eco-friendly royal of 2019/2020.

Camilla, the Duchess of Cornwall, placed as the second most eco-friendly royal – behind her husband, Prince Charles – with a total of 84 eco-points overall. Despite having 74 points deducted for her high carbon footprint, the Duchess more than made up for it when it came to environmental engagements and social media posts regarding the climate and pollution.

The Queen’s husband, Prince Phillip, better known as the Duke of Edinburgh, placed as the third most eco-friendly royal, scoring 44 Eco-Points overall. From supporting 40 environmental charities, and having an impressive carbon footprint of zero, it’s no wonder the Duke of Edinburgh has one of the best eco-friendly scores of all 10 royals considered. It’s worth noting that the royal has “retired” from royal duties, so travelling will be kept at a minimum.

With a positive sustainable fashion record and being vocal on social media about environmental issues, Catherine, the Duchess of Cambridge, was awarded the title of the fourth most eco-friendly Royal Family member with a final score of 29 Eco-Points – 15 less than Prince Phillip.

Her Majesty herself placed in fifth, with a total of 23 points on our Eco-Friendly Royals Index. Given her commitment to 10 environmental charities, as well as having an electric car, it comes as no surprise that she makes the top five most eco-friendly royals. 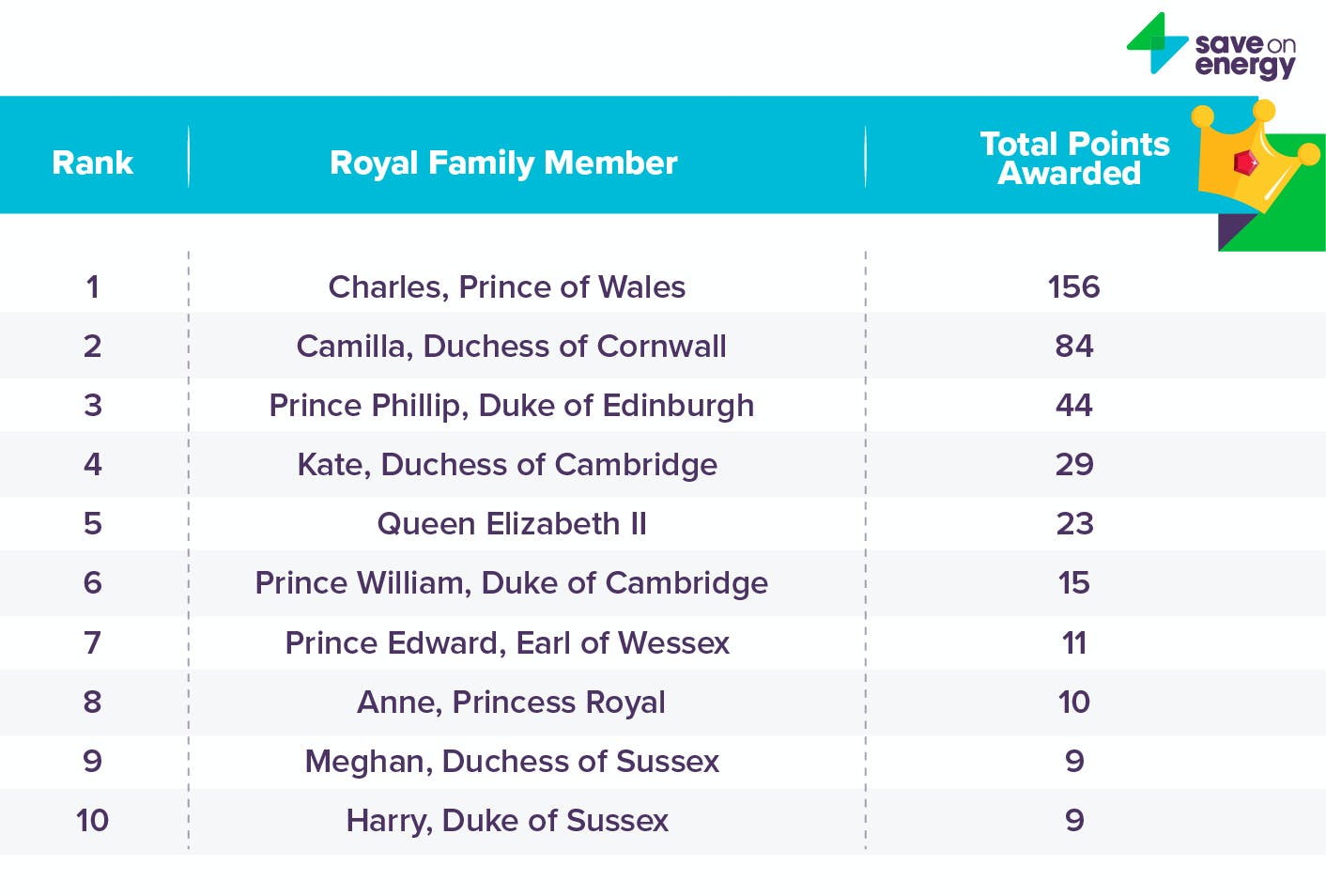 Who are the least eco-friendly royals?

Sharing the crown of the least eco-friendly royals are the Duke and Duchess of Sussex, racking up just nine Eco-Points each. Despite having been awarded points for owning an electric car and Meghan’s loyalty to sustainable fashion brands, Harry and Meghan engaged considerably less than others with environmental charities and engagements between March 2019 and 2020, which hinders their score. They also had the third worst carbon footprint of all royals studied.

Next up is Anne, Princess Royal, with just 10 points on our Eco-Friendly Royals Index – just one more point than Harry and Meghan. Even though Princess Anne supports eight different environmental charities and sporting sustainable fashion, she didn’t attend many environmental engagements and rarely posts on social media about issues like pollution or climate change.

Prince Edward, the Earl of Wessex, follows with 11 points in total. Despite attending the second highest number of environmental engagements (3), the prince let himself down by having three points deducted for his travel footprint.

Rounding off the top five least eco-friendly royals is Prince William, the Duke of Cambridge, with a total of just 15 Eco-Points. But due to a deduction of 15 points for his travel footprint, unfortunately the Duke is placed towards the bottom of our Eco-Friendly Royals Index.

You can ensure that you're doing your bit for the environment by switching to a renewable energy tariff.

Which royal has the worst carbon footprint?

Despite their efforts to be eco-friendly, the Royal Family has the responsibility to travel across the globe to attend events, whether it be conferences, helping charities, or attending meetings – but at what cost does this have on the environment?

To determine which royal has the worst carbon footprint, we found out how frequently each royal travelled, the distance they travelled, and which form of transport they used. This was then calculated into CO2 emissions, with the royals that rack up the highest CO2 emissions penalised in our Eco-Friendly Royal Index. 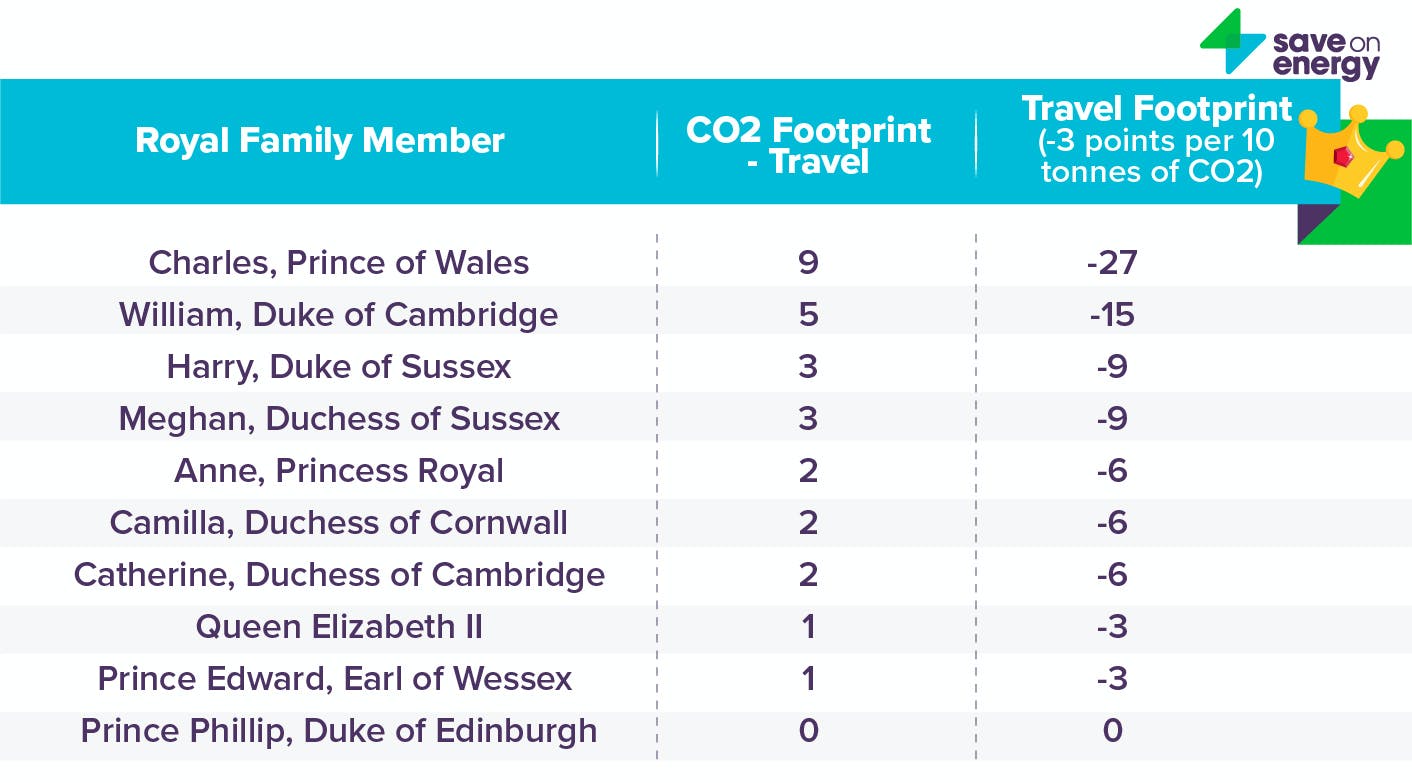 The Royal Family racked up a combined total of 29.1 tonnes of CO2 due to their travel footprint between March 2019 and March 2020, according to our analysis of the Royal Travel Report. When comparing with the year before (March 2018 - 2019), the amount of CO2 created by the Royal Family came to a total of 130 tonnes – 77% higher than the same period in 2019 - 2020. This is due to the royals refraining from using the gas-guzzling RAF Voyager, therefore decreasing their collective CO2 footprint considerably.

But who will be crowned the royal with the worst CO2 footprint between March 2019 and 2020?

According to our analysis, despite being crowned the most eco-friendly royal family member, Prince Charles has the worst travel footprint of all 10 royals considered. The prince is predicted to have produced nine tonnes of CO2 between March 2019 and March 2020, resulting in a deduction of 27 points.

However, it’s worth noting that Charles’ travel footprint has significantly improved when compared with March 2018 and March 2019, where the prince produced an average of 40 tonnes of CO2 from travelling to royal engagements.

Prince William was the next worst offender in our Eco-Friendly Royals Index when it came to his travel footprint. The prince is predicted to have produced around five tonnes of CO2, leading to a reduction of 15 Eco-Points. If the Duke of Cambridge didn’t have such a high travel footprint, we predict he could have scored a spot among the top five eco-friendly royals.

However, like his father, the Duke of Cambridge’s travel footprint has seen a significant decrease when compared with March 2018 and March 2019, where the Duke emitted 35 tonnes of CO2.

The third worst travel footprint goes to both the Duke and Duchess of Sussex, with the duo predicted to have produced around three tonnes of CO2 each from travelling to royal engagements. This left Harry and Meghan with a deduction of nine points each.

Sharing the crown of the fourth worst travel footprint are the Duchess of Cornwall, Princess Anne and the Duchess of Cambridge, each producing two tonnes of CO2 – they each faced a deduction of six points.

Which royals are most supportive of environmental charities? 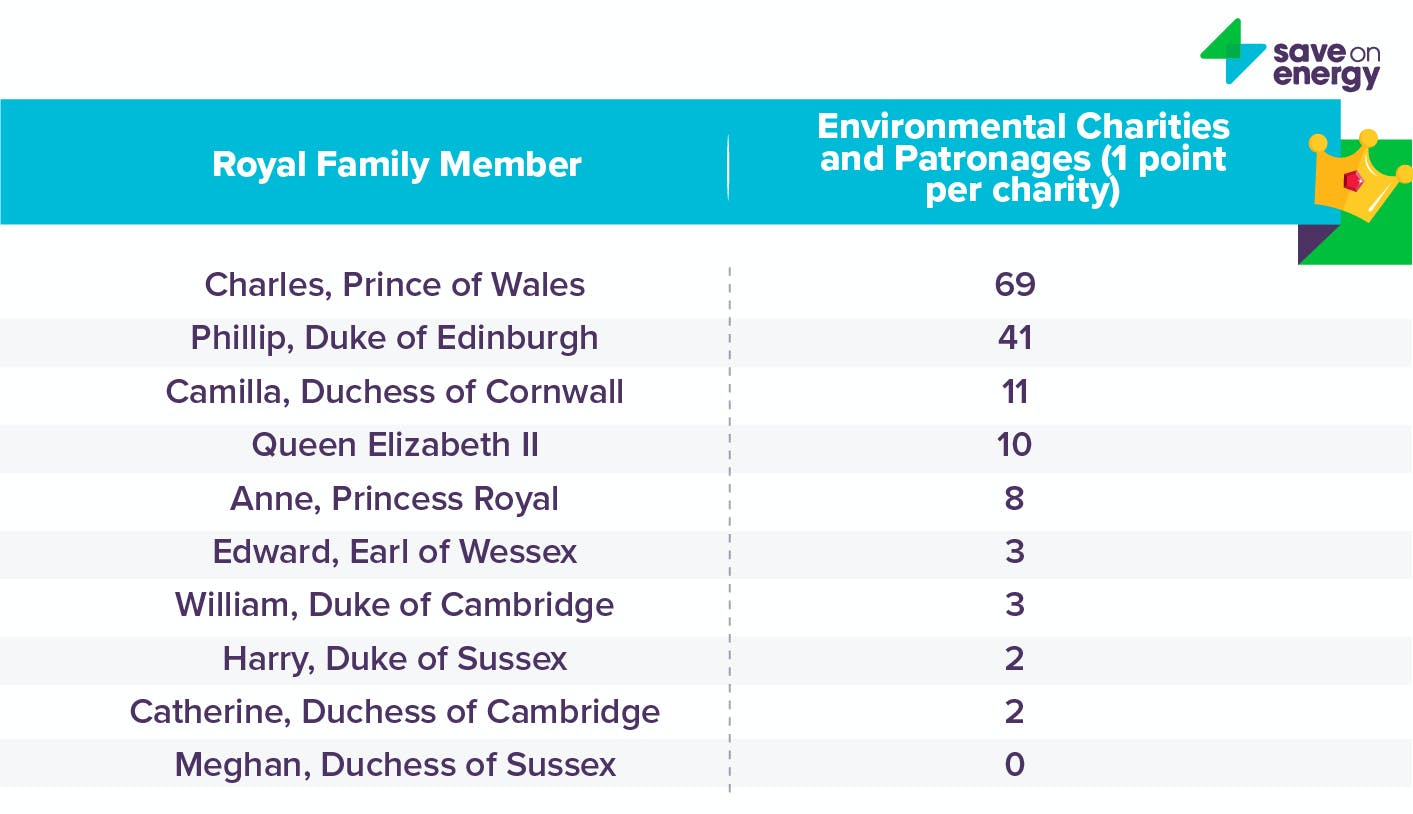 Despite his poor record when it comes to travel, Prince Charles is the most supportive royal when it comes to environmental charities. Our research reveals that the future king is involved with the most eco-friendly charities of all royals – 69 in total and awarding him 69 eco-points as a result.

His father, Prince Phillip, came out as second most supportive of green causes, with ties to an impressive 41 environmental charities in total. With relatively neutral scores across the board, his commitment to eco-charities certainly helped him place as the second most eco-friendly royal overall.

Which royals participate most often in environmental engagements? 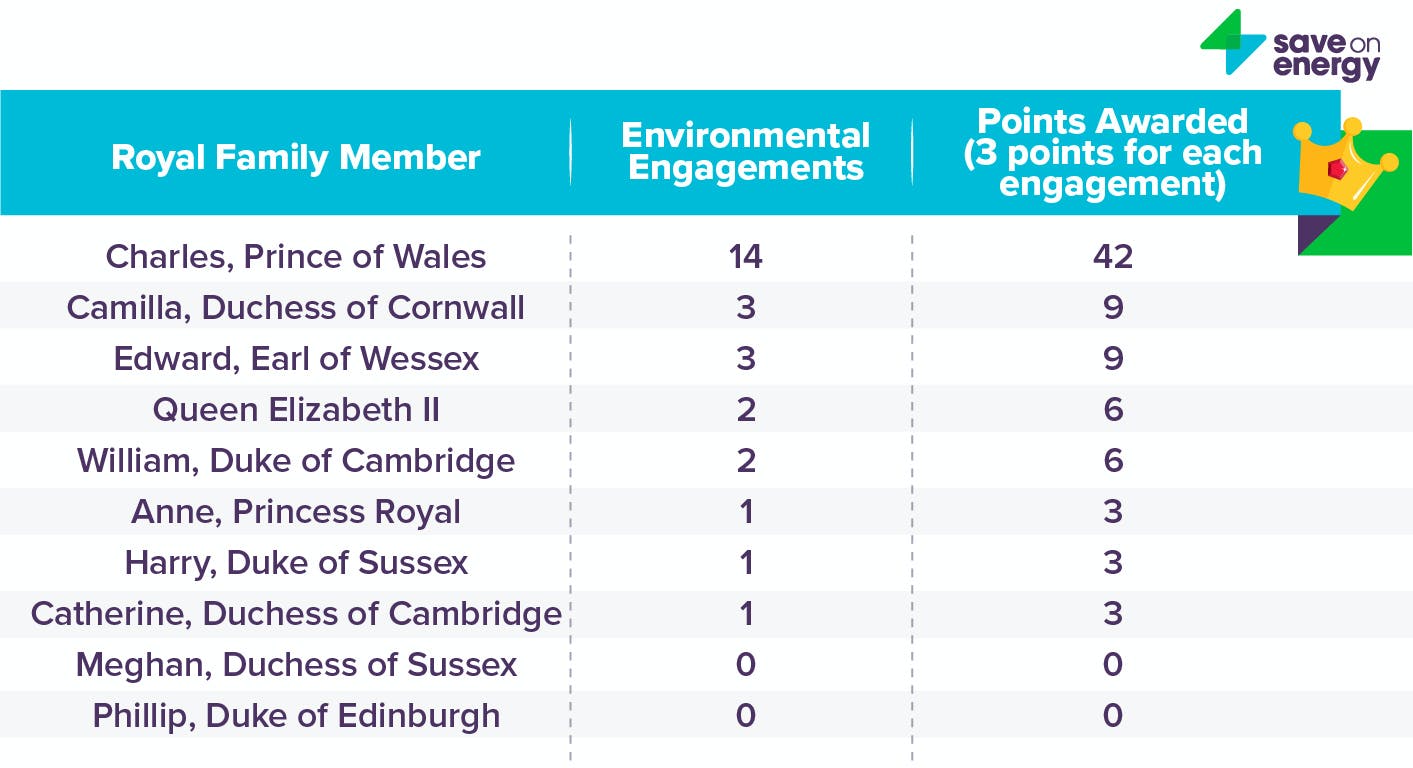 Topping the list once again is Prince Charles, who attended the most environmental engagements – perhaps suggesting why his travel footprint is so high. The Prince of Wales attended 14 eco-related engagements, thus landing him 42 points in our Eco-Friendly Royals Index.

Having attended 11 fewer engagements than Prince Charles (3), the Duchess of Cornwall and the Earl of Wessex came in second. This means both royals received a total of nine points each in our Eco-Friendly Royals Index.

Her Majesty the Queen and Prince William participated in two environmental engagements, which means they are both awarded six Eco-Points in our index.

Which royals have the most sustainable fashion record? 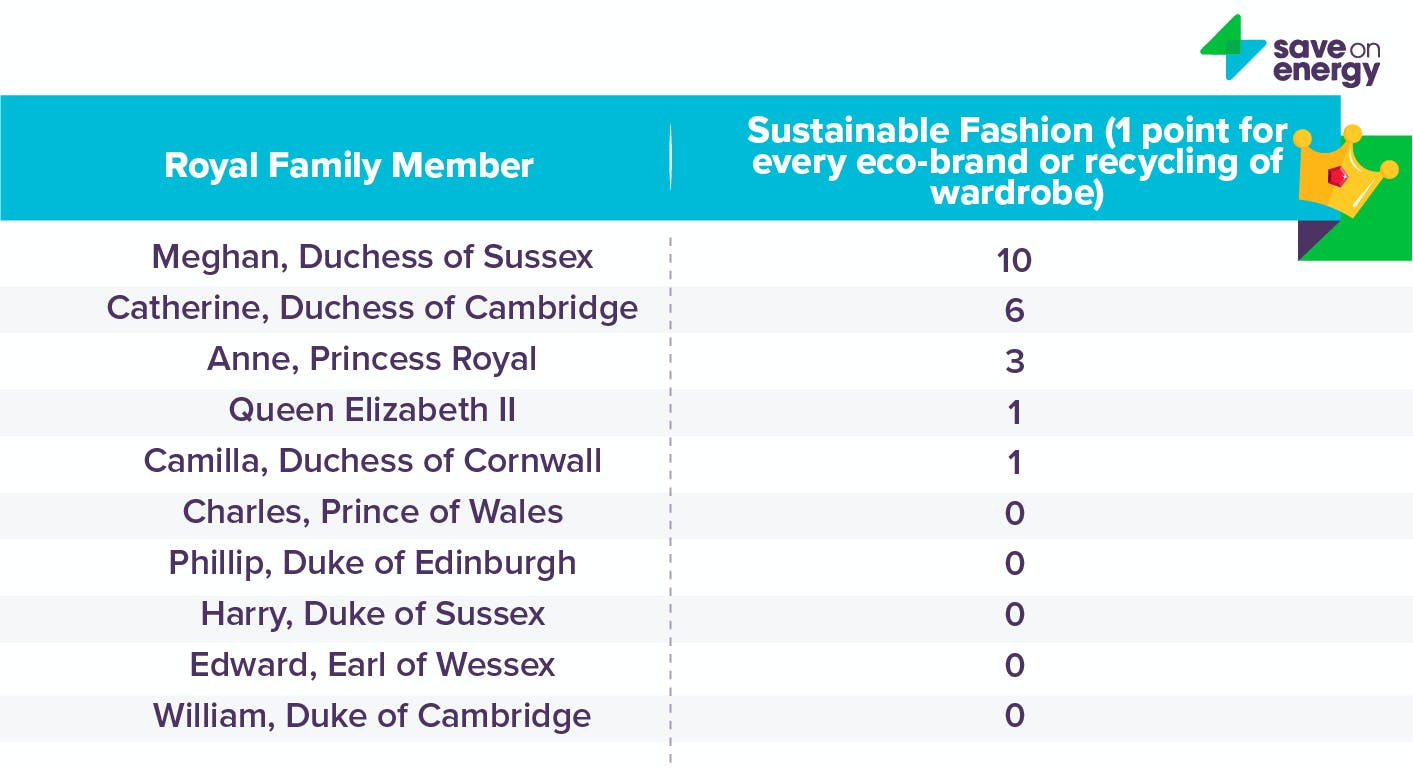 Meghan took the crown thanks to her eco-friendly wardrobe, with 10 reported instances of the Duchess of Sussex wearing sustainable fashion brands such as Stella McCartney, Rothy, Veja and Millie.

Sporting the likes of Beulah London and Daniella Draper, the Duchess of Cambridge came in second with six reported instances of Kate wearing sustainable fashion brands.

Princess Anne placed in third after been spotted three times in eco-friendly brands or recycling outfits. Following behind in joint fourth are Queen Elizabeth II and Camilla, the Duchess of Cornwall, with just one instance of both royals opting for sustainable clothing according to the media.

Which royals have the most eco-conscious social media presences? 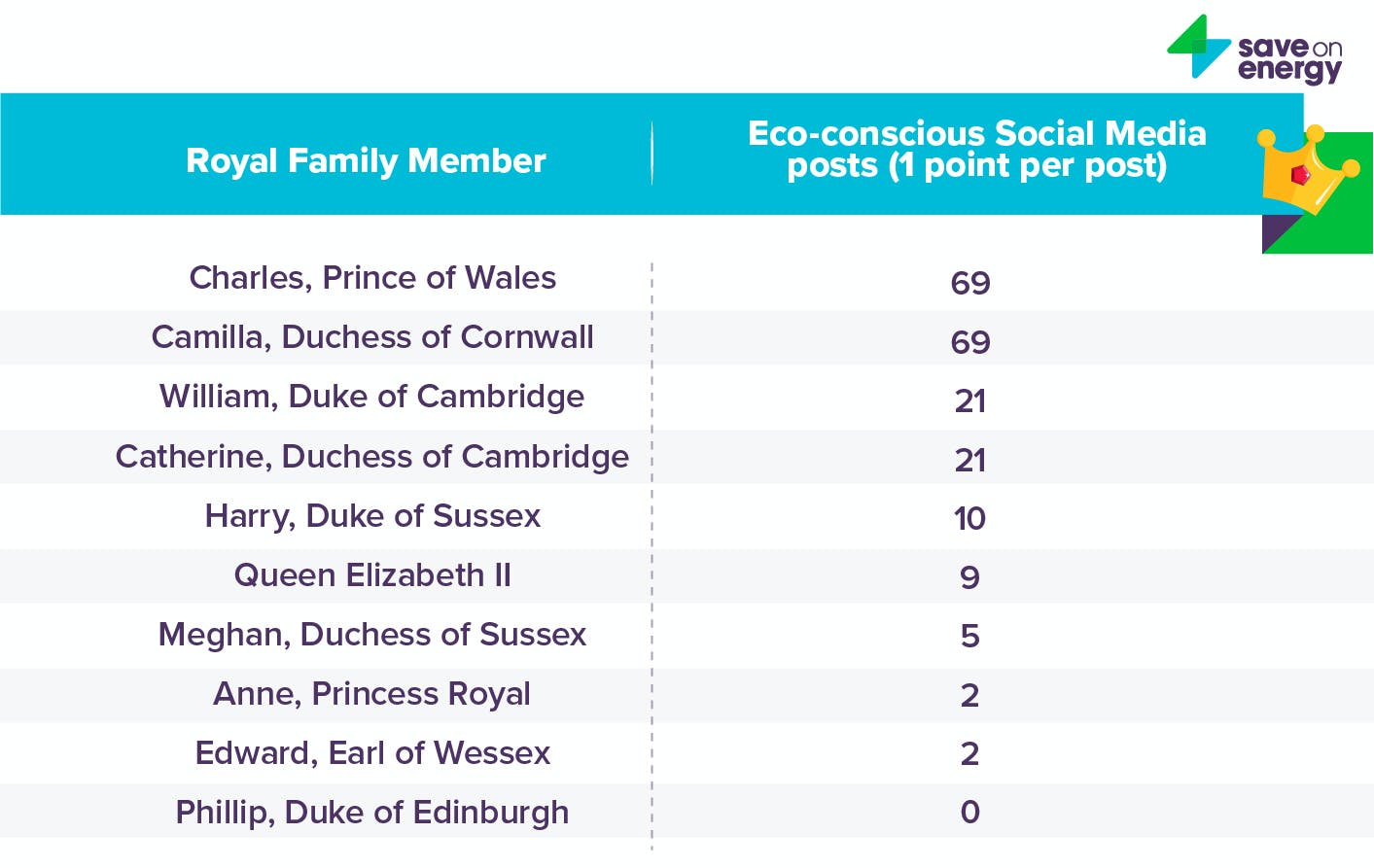 When it comes to social media posts, most royals (or their staff) are "active" on sites like Twitter and Instagram. In fact, Prince Charles and his wife Camilla were the most vocal royals of all, with the most posts containing words like ‘sustainable’, ‘warming’, ‘recycling’ and ‘environmental’ – 69 times to be exact.

The Duke and Duchess of Cambridge were also keen to speak about eco-issues online, with a total of 21 environment-related social media posts each. Prince Harry was also vocal about environmental issues online, earning a total of 10 points in our Eco-Friendly Royals Index.

Which royals opt for electric cars?

Of all of the royal family, we could only find mentions in the press of five royal family members using an electric car, thus earning them three points each:

1. To determine the carbon footprint of each royal, energy comparison site SaveOnEnergy referenced the Royal Travel Report to find the trips made year ending 31 March 2020. This list only considers trips that cost at least £15,000.

2. To make the comparison between the amount of CO2 emitted per year, we used the Royal Travel Report for the year ending 31 March 2019. This list only considers trips that cost at least £15,000.

3. For every trip, an estimated travel duration was calculated. This was achieved by finding out the duration of a direct commercial flight from A to B. In cases where commercial transportation was non-existent, the next closest airport was used. In cases where there was no airport nearby, the travel duration was estimated by finding the air distance between the two locations and using the average speed of the given transportation type to find the duration.

4. The carbon footprint was found for each trip by multiplying the duration estimate by the CO2/hour emissions of the respective transportation type. The following assumptions were made:

The results show their individual contribution. For each trip where two members were travelling, the emissions were divided in two to attribute fair results to each travelling member.

3 points were deducted from the royals’ total score for per 1 tonne of CO2 emitted through the transport used.

5. To determine the numbers of charities and patronages linked to each royal, the data was taken from the official royal website. The organisation type used was “environmental” and the region was “worldwide”. 1 point was added for each charity and patronage that each royal member supports.

7. Eco-conscious social media posts were taken from the official royal accounts on Twitter and Instagram, since 14/09/2019 until 14/09/2020. The keywords used for the research was "environment", "sustainable", "climate", "warming", "pollution", "recycling", "environmental". The data was collected on the 15/09/2020. 1 point was added for each environmental social media post.

9. An average British person emitted 8.34 tonnes of CO2 per person in 2017 – the last year when such data for the UK was available on Global Carbon Atlas.

10. SaveOnEnergy chose to exclude Prince Andrew from this campaign and study.