Are green weddings on the rise?

Weddings are notorious for being wasteful events, however, they are also renowned for being one of the most important days of a couple’s lives. With an increasing number of Brits opting for a more eco-friendly lifestyle, green weddings are on the rise, with couples seeking to turn their wedding into an eco-friendly function. Intrigued by this trend, SaveOnEnergy were keen to discover exactly how far Brits were willing to go in order to be green on their big day.

Energy comparison site SaveOnEnergy surveyed 2,400 respondents and asked them whether they would be interested in hosting an eco-friendly wedding and what sacrifices they were willing to make.

How many Brits are seeking a more eco-friendly wedding? 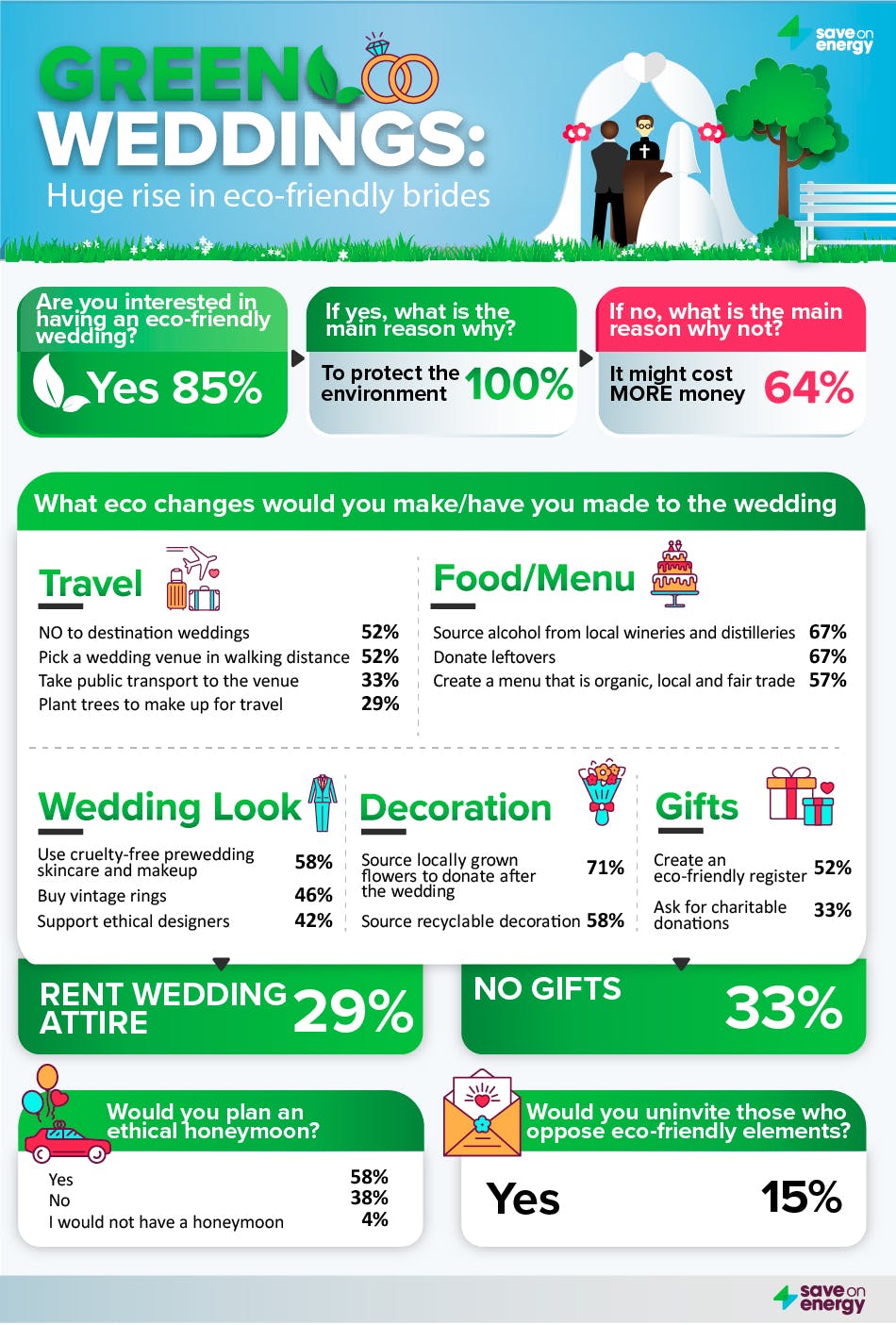 SaveOnEnergy discovered that an overwhelming 85% of individuals surveyed were interested in hosting a more eco-friendly wedding. Of those that answered affirmatively, every respondent said that they wanted to host a green wedding in order to protect the environment.

Meanwhile, many respondents also had more personal reasons for going green, with 43% saying that their interest in a green wedding stems from a desire to save money, and a further 43% wishing to reduce the guilt involved in hosting such an extravagant event.

The trendiness of eco-friendly weddings also appeared attractive to prospective brides and grooms, with 13% of respondents interested in hosting an eco-wedding to seem fashionable and timely.

For most of those reluctant to host an eco-friendly wedding, it was the cost that put them off. In fact, 64% of those not interested say they are concerned that it would cost them more than a traditional wedding might - a worthy concern considering how pricey weddings have become, with the cost of a wedding averaging around £30,000.

The second most popular reason for a lack of interest in a green wedding was the additional planning involved - again, something that traditional weddings are renowned for.

Meanwhile 9% of those disinterested by the notion of a green wedding felt that their special day was allowed to be extravagant, albeit at the expense of the environment. Interestingly, a further 9% of those that claimed not to want an eco-friendly wedding felt that the guests might not attend if certain changes were made. But what kind of changes might these be?

What changes are couples making?

SaveOnEnergy surveyed individuals to find out exactly which changes couples are interested in making to host an eco-friendly function. 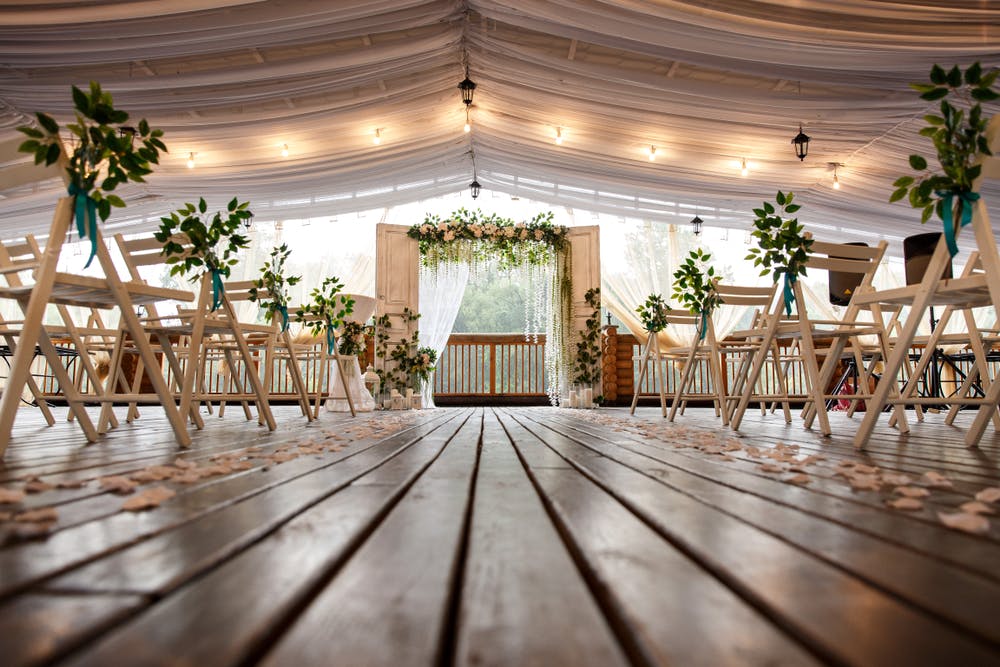 In terms of location, almost 4 in 5 of those surveyed said that they would be more selective when it comes to choosing a wedding venue based on their record of recycling and food packages available.

Over half of respondents deemed ceremonies abroad to be a no-go, with air travel completely out of the question. A further 1 in 5 of those seeking a green wedding would even go as far as to choose a location on the basis of where guests live in order to limit the amount of travel required.

On the topic of travel, over half of the respondents said that they’d choose a wedding venue in walking distance from everyone. However, this might be a tricky task if your friends and family are jotted around the UK.

A third of those asked said that they’d encourage guests to travel via public transport, rather than polluting the planet further by arriving separately. In addition to this, 29% of respondents would go as far as compensating for the travel used by themselves and guests by planting trees! 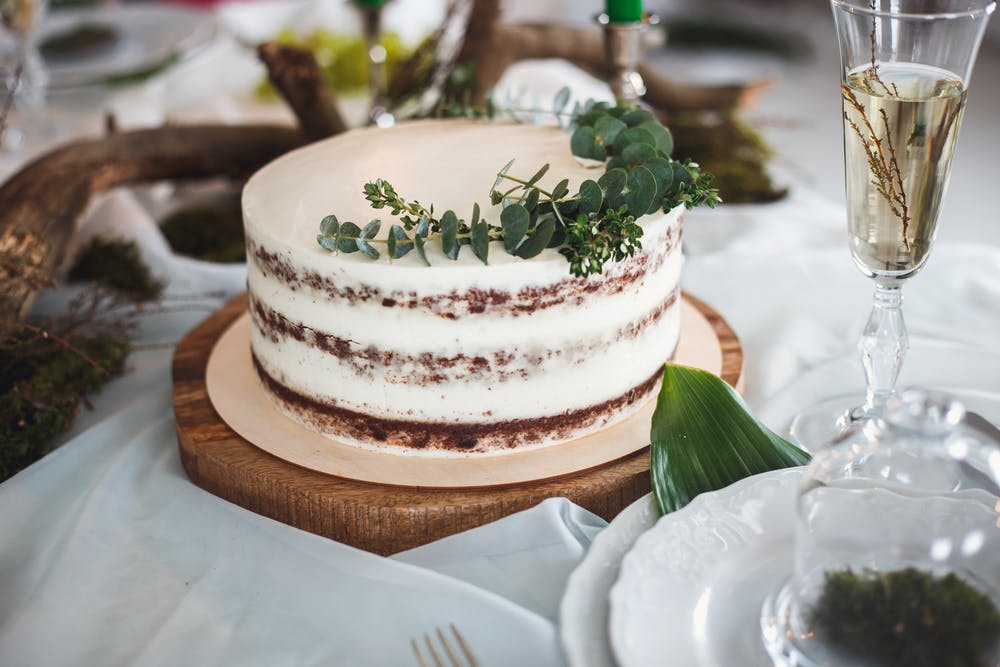 Food and drink tends to be non-negotiable at weddings, with the menu eagerly anticipated by many. With this in mind, it is unsurprising that only a third of those surveyed were willing to restrict their menu to make it vegan. Creating a menu that was organic, local and fair trade did prove more popular, however, with over half of respondents willing to make this change.

Overall, the most popular changes made to a wedding menu involved sourcing alcohol locally or donating leftovers - both of which 67% of respondents would do for a more eco-friendly day.

When it came to wedding stationery, respondents were less convinced about making sacrifices. Many appeared keen to create these from recycled or biodegradable paper, with 68% fond of the idea.

Meanwhile, seeking to cut paper altogether, over half (55%) of those surveyed said that they were willing to make stationery, such as invites, completely digital! 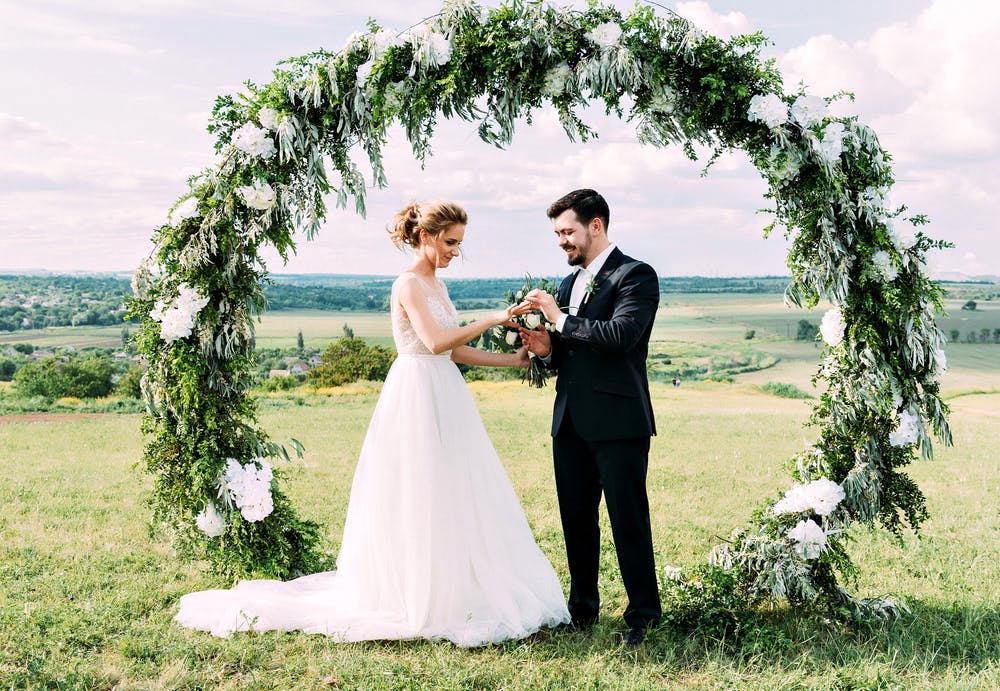 Changes to wedding attire proved slightly less popular amongst brides and grooms, with just over half willing to make an eco-compromise on items such as pre-wedding skincare and make up. Of those asked, 58% were willing to use cruelty free and zero-waste products to complete their wedding day look.

The rings were the second most likely compromise, with the notion of vintage and reused rings popular amongst almost half (46%) of respondents. Similarly, ethical jewellery was also an option for almost 40% of prospective weds.

However, it was renting wedding attire and buying responsibly sourced and fair mined engagement rings which proved least popular, likely due to the sentimental value that these pieces hold. Instead of renting their wedding attire, SaveOnEnergy found that couples would much rather purchase from ethical designers.

As far as decorations were concerned, couples were very willing to make eco changes in a bid to protect the planet. A hefty 71% were keen to source locally grown flowers or use reasonable alternatives. The same number of Brits were willing to donate their flowers once the wedding was over.

Recyclable decorations, non-toxic candles and biodegradable confetti were also popular, with 58% willing to swap the usual decor for these eco-alternatives!

Hiring proved once again less popular, with only a third of couples willing to hire their decorations for their big day.

Gifting the happy couple something they want or need is a popular wedding tradition - but one that a third of couples were willing to break. A third (33%) of respondents said that they would ask not to receive gifts as part of their eco wedding, meanwhile a further third (33%) would rather ask for charitable wedding donations instead.

However, over half of respondents (52%) still wanted gifts and preferred to create an eco-friendly register of gifts for guests to choose from. 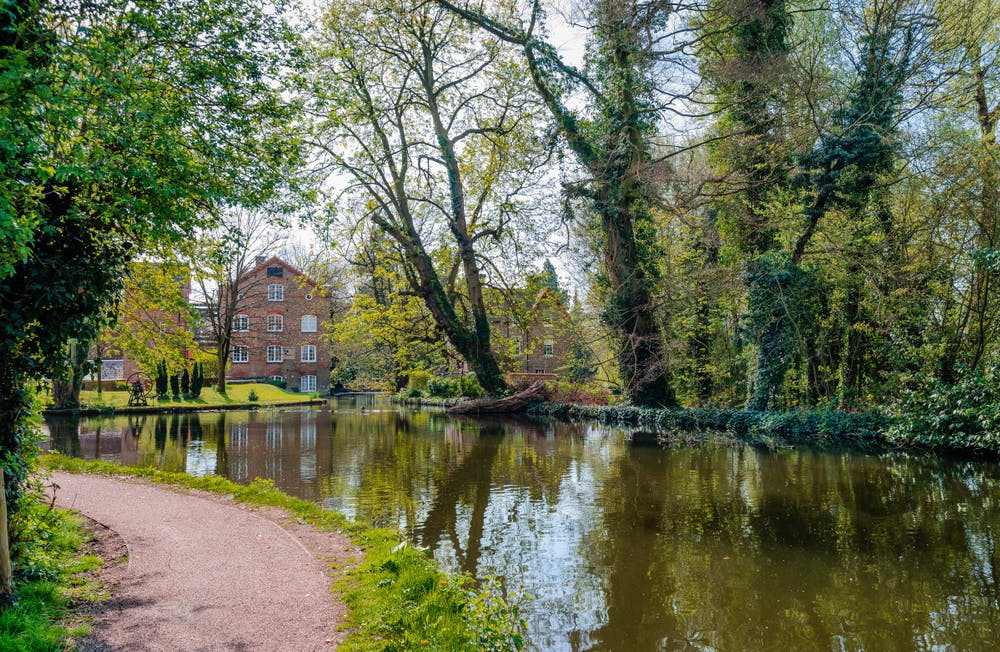 Of all changes that could be made, couples were most reluctant to rule out a honeymoon altogether, with only 4% of those surveyed willing to make that change. However, 58% are determined to plan a more ethical honeymoon, whilst 38% want to honeymoon as usual.

If you’re part of the 58% seeking the perfect ethical honeymoon hotspot, you’re in luck! SaveOnEnergy has also analysed search volume data to identify the most sought after eco staycation spots:

Stoke By Nayland Hotel in Colchester was crowned as the most popular eco-staycation spot, racking up an average 3,850 searches every month. With miles of green, this spot is a beautiful place to relax after an energetic ceremony.

The Grove in Hertfordshire followed shortly behind, with an average of 3,420 searches monthly. Sat within 300 acres of countryside, the Grove is home to many outdoor activities, all of which are eco-friendly.

The third most sought after spot was Balbirnie House Hotel, located in Fife. The mansion, built in 1777 and sitting within 400 acres of green, receives 2,830 searches on average each month.

Daylesford Organic Farm and Rose in Vale Country House Hotel both placed within the top five most sought-after spots to staycate in the UK, rounding off the list of honeymoon hotspots.

If you’re looking for more inspiration, SaveOnEnergy has also listed some of the most Instagrammable staycation spots in the UK - perfect for if you’re planning an eco-friendly UK mini-moon.