How much do electricity bills cost in each European country? 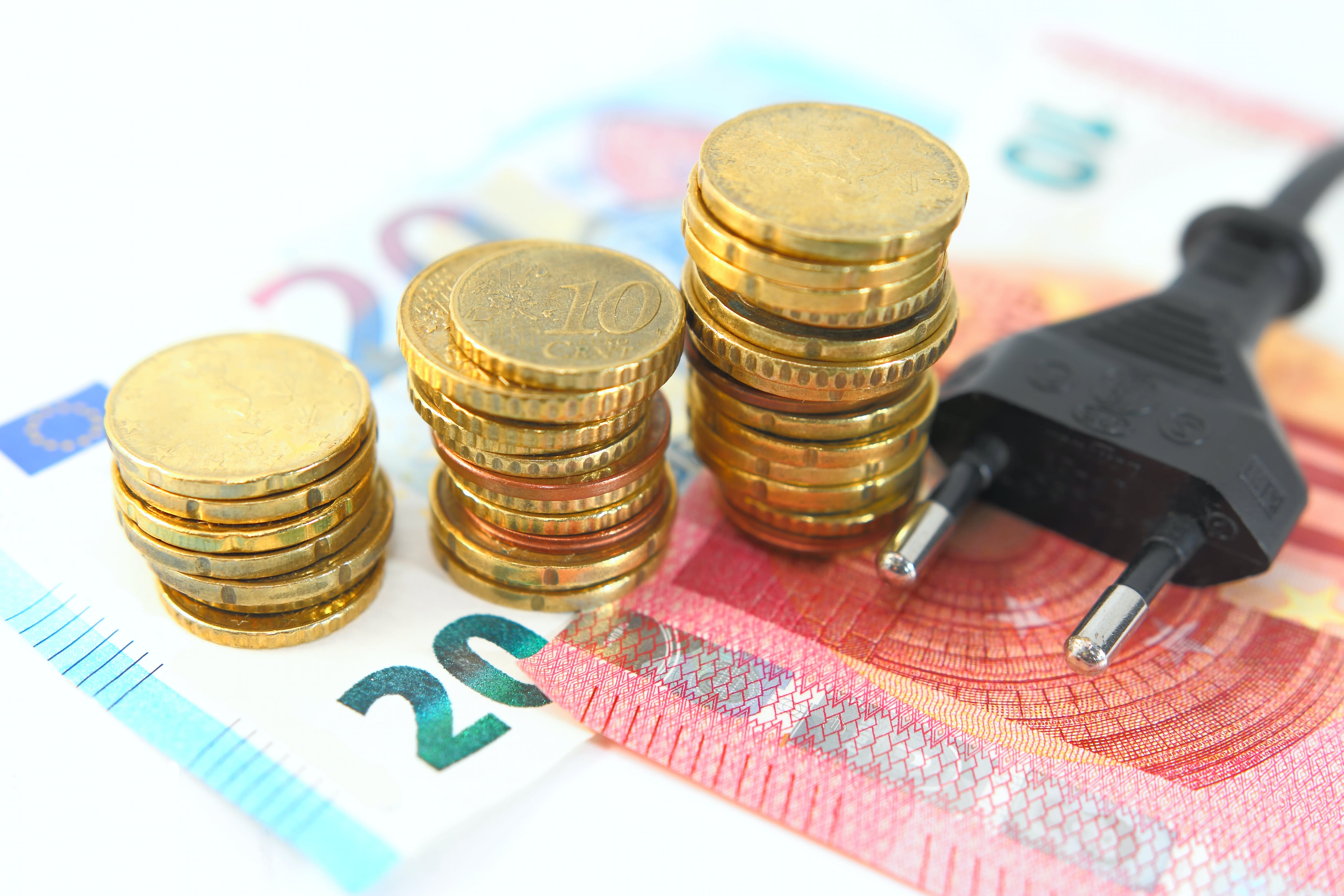 It doesn’t matter where you are in the world, there’s one thing each country has in common: people love to moan about the cost of electricity.

Even though electricity prices in the UK aren’t cheap, some countries have it significantly worse. This led energy switching site SaveOnEnergy to investigate which countries are forking out the most and least for their energy bills across Europe. 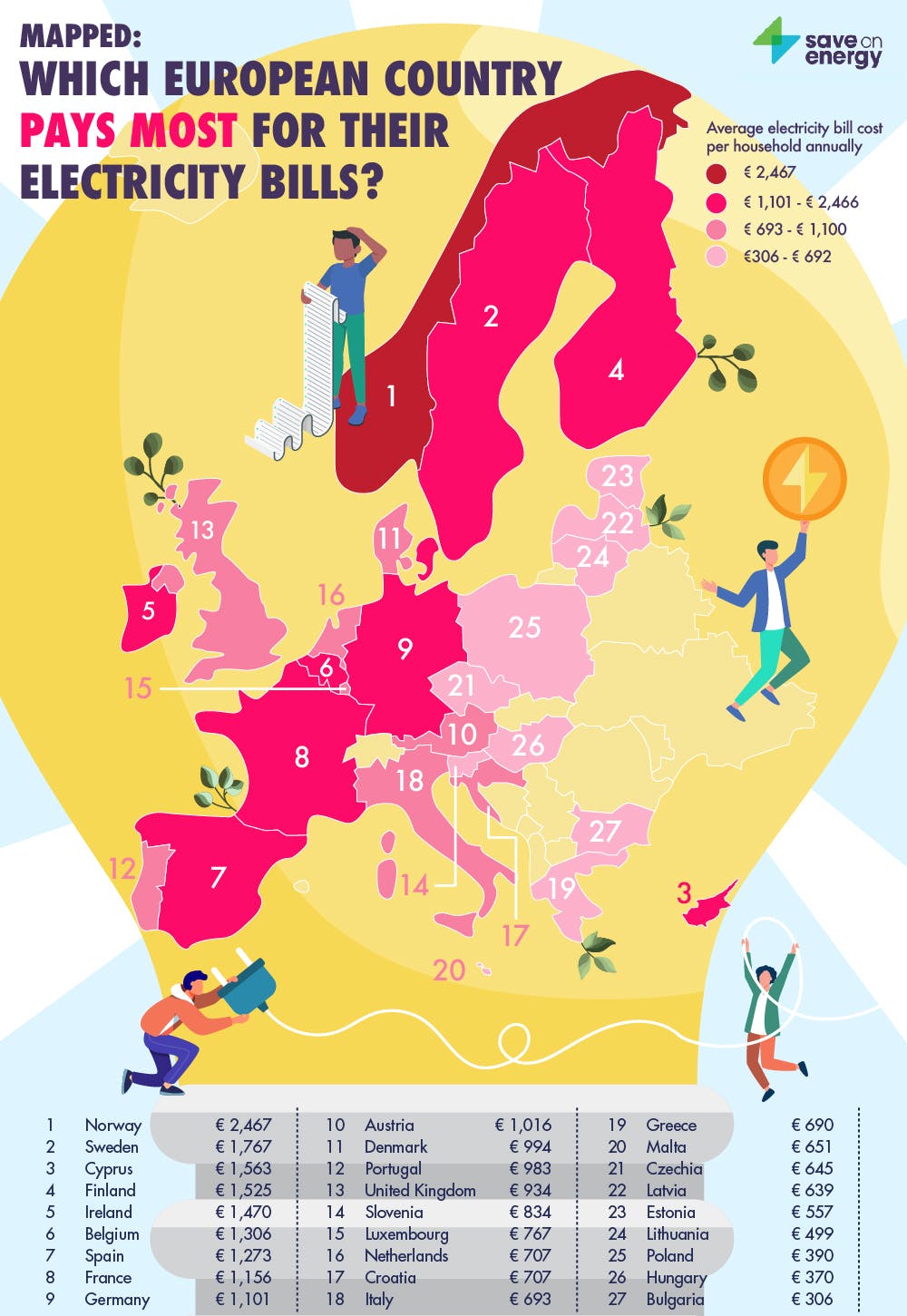 Countries with the most expensive electricity bills

The most expensive electricity bill in Europe can be found in the Scandinavian country of Norway. Residents of this country can expect to pay a whopping €2,467 per year for their electricity – €2,161 more than Bulgaria who has the cheapest bill.

But despite being the most expensive electricity bill in the whole of Europe, when compared to the country’s average salary (€39,125), Norwegians can expect to spend 6.3% of their annual salary on electricity bills.

In second place is Norway’s immediate neighbour, Sweden. In this Scandinavian country, inhabitants can expect to pay €1,767 for their electricity bills each year – €700 less than Norwegians. Compared to the average annual salary (€24,474), residents of Norway can expect to spend 7.2% of their annual wage on electricity bills.

The third most expensive energy bill goes to Cyprus, with the average bill costing around €1,563, on average, per year. According to our research, the average Cypriot earns €16,215 per annum, which means they can expect to spend 9.6% of their salary on electricity bills – the third highest amount when taking average salary into account, just after Portugal (9.8%) and Croatia (9.7%).

In fourth place is Finland, with residents paying €1,525 for their electricity each year. As neighbours of first place Norway and second place Sweden, it seems Scandinavian countries have some of the highest electricity bills in Europe! Bearing in mind a Finnish native typically earns around €24,879 per year, on average, they can expect to spend 6.1% of their salary on their energy bills.

Ireland is the fifth most expensive of all European countries considered, with the country’s electricity bills racking up to €1,470 per year on average. When taking into account how much the average Irishman or woman earns (€24,920), residents in this country can expect to spend 5.9% of their annual salary on paying their electricity bills.

Countries with the cheapest electricity bills

The cheapest electricity bill in Europe can be found in Bulgaria, with the average cost per household being just €306 per year – a difference of €2,161 when compared to Norway who has the most expensive energy bills! When comparing this figure to the average salary of a Bulgarian national (€4,224), Bulgarians spend around 7.2% of their annual salary on electricity bills – this figure puts them among the top 10 of all countries considered.

Following closely behind Hungary is Poland, with the average electricity bill costing €390 per household each year – the third cheapest. When bearing in mind the average salary per annum for Polish inhabitants sits at €7,124, we can reveal that Poles spend 5.5% of their annual salaries paying off their electricity bills.

Fourth spot goes to Lithuania who pay €499 for their electricity bills, on average, per year. According to our research, Lithuanians typically earn in the region of €7,586 per year. Based on this, they can expect to pay 6.6% of their salary each year on electricity bills.

A full breakdown of the research: 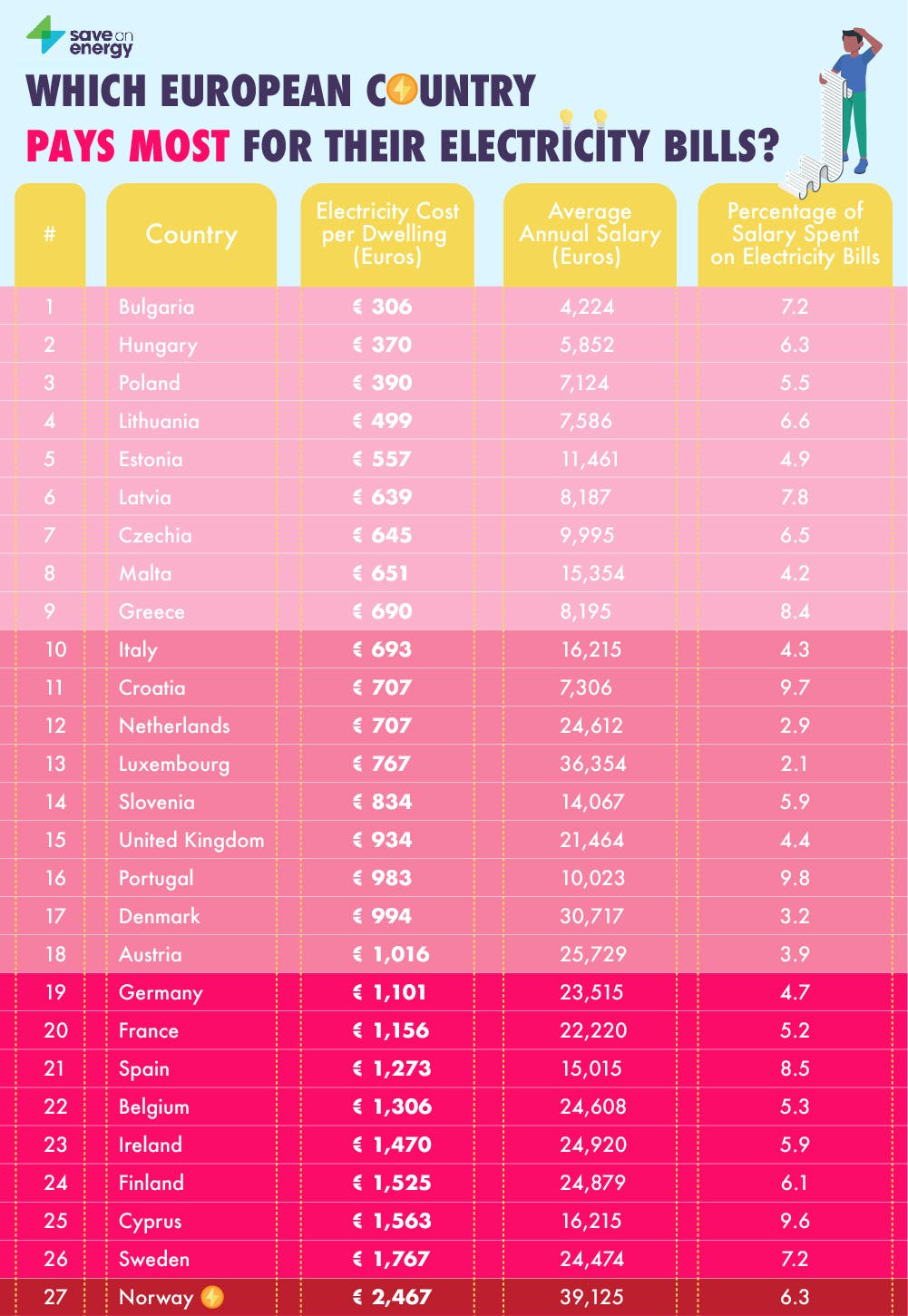 How much do electricity bills cost in the UK?

In 2019, the average electricity bill for UK households was found to be €934 per year – around €77.83 per month. When comparing this figure to the average salary of a Brit earning €21,464, the UK can expect to spend 4.4% of their wages per year on energy bills.

According to our research, this places the UK in the middle of the European rankings – €1,533 cheaper than Norway who has the most expensive bill, and €628 more than the cheapest bill found in Bulgaria.

The UK vs. Ireland

When compared to our neighbours, Ireland, the UK fare significantly better. Ireland have the fifth most expensive electricity bill in the whole of the Europe – €1,470 per year, or €122.50 per month – compared to the UK who ranks in thirteenth place. That’s a difference of €536 per year, or €44.67 per month.

5 tips on how to save money on electricity bills 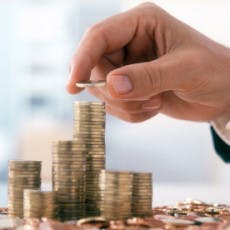 If you haven’t switched your energy supplier recently, you may be able to save yourself a lot of money off your electricity bills. Experts suggest comparing energy prices every year to sure you’re getting the best deal.

Energy-saving light bulbs can help you reduce energy and help you to cut your bills easily. In fact, switching from an old-style bulb to an LED bulb – the most energy efficient light bulb that uses almost 90% less energy than incandescent bulbs – could save you around £180 over its lifetime.

When replacing an appliance, be sure to thoroughly research each option and choose the most energy efficient model. By opting for energy-efficient appliances in your home, you could potentially save hundreds per year.

4. Get a new boiler fitted

Did you know that more than half of what you spend on energy each year comes from heating? Replacing an old boiler with a modern, energy-efficient option can significantly alter your energy bills. For example, if you upgrade an old G-rated gas boiler with a new A-rated condensing model, you could save £315 per year!

Stopping any heat from escaping from your property will undoubtedly help you save money off your energy bill. Be sure to check windows, doors, fireplaces, floorboards, and loft hatches for any draughts and fix them accordingly. If you haven’t already, insulating your loft and cavity walls is also beneficial.

However, if you want to cut your energy bill quickly, it’s important to understand your energy bill and figure out where you are using electricity the most. This will allow you to make changes accordingly, thus cutting your energy bill. If you have a smart meter, it will tell you how much energy you use in real time.

1.      SaveOnEnergy used Eurostat's Household energy prices in the EU' report from May 2020 to find the household electricity prices for each European country in the second half of 2019. These figures include all taxes and levies.

3.      The year-over-year growth rates were then used to project the electricity consumption per dwelling for each household in 2019. For instance, to estimate for 2001 the following formula was used: Consumption in 2000 + (Consumption in 2000 X %/year change 2000-2008). This was then repeated for each country and year.

4.      The mean and median salary for each European country was found using https://appsso.eurostat.ec.europa.eu/nui/show.do?dataset=ilc_di03&lang=en. Finland, Hungary, and the UK didn't have figures available for 2019, so 2018 figures were used.