Which best-selling books are costing earth the most trees?

Between the gripping adventures of Harry Potter and timeless allure of War and Peace, it’s no wonder countless books are being produced and sold every day, but what are the effects of this rapid manufacturing? Interested in exploring the environmental impact of mass-producing best-selling books, energy switching site SaveOnEnergy has calculated how many trees are used to create some of our most-loved books.

In order to estimate which books have cost Mother Earth the most trees, we first found the books with the most global sales and noted down the number of pages per book. We then used this number to calculate the total number of sheets 'sold' around the world.

Having found out how many sheets of paper an average tree produces (about 10,000), we divided the number of sheets sold by this figure to create an approximate analysis of which best-selling book uses the most trees.

The top 10 best-selling books using the most trees

Our society’s focus has started shifting to renewable or ‘green’ energy supplies rather than using our planet’s natural resources, and trees are one of these resources we are looking to save. Through our research, we have found that a large number of trees are cut down and the wood is used to make paper for books. Using the above calculations, we have collated a list of the top 10 books potentially costing us the most trees.

Taking the top spot is a childhood favourite, Harry Potter and the Order of the Phoenix. This bulky book’s first edition is made up of 766 pages and has been sold over 120,000,000 times worldwide. Due to this popularity, the estimated number of trees it has used soars to 4,979,000, enough to fill approximately 457 acres of land!

Coming in second is the beloved, and topic of many high school exams, War and Peace. Written by Leo Tolstoy, this novel was first published in 1869 and has been a hit since then, resulting in roughly 4,410,000 trees used to create the pages.

The fourth instalment of Harry Potter comes in at number three. Harry Potter and the Goblet of Fire sees the titular character competing in a wizarding tournament, and approximately 4,134,000 trees were used to show people how he did.

J.K. Rowling’s creation also sits at joint fourth with Harry Potter and the Half-Blood Prince and The Deathly Hallows each costing the earth around 3,945,500 trees to produce in order to meet the demand.

Dream of the Red Chamber is one of China’s Four Great Classical Novels and has been adapted and loved since 1791. Due to this everlasting appreciation, this book is highly sought after, and a large number are printed to meet the demand, which means roughly 3,520,000 trees have been lost to this novel.

A practical look into sexuality, The Hite Report has taken the number seven spot. This non-fiction book has used approximately 3,190,000 trees which is enough to fill over 292 acres of land.

Eighth place is a tie between The Hobbit and Ben-Hur: A Tale of Christ both using around 3,100,000 trees during their duration of print so far. Although their subjects are not too similar, the environmental impact is pretty even.

Not quite breaking the three million mark and coming in at number nine is And Then There Were None – a mystery thriller that has cost an estimated 2,720,000 trees for readers to solve.

Finally, at number 10 on the list is another appearance from none other than Harry Potter. Harry Potter and the Philosopher’s Stone, the first in the popular book series, has made approximately 2,676,000 trees disappear since it was published in 1997.

Top 10 authors costing the most trees

To explore further, we looked at the authors who have penned the best-selling books that resulted in highest loss of trees. It may not come as a surprise that J. K. Rowling tops the charts with an estimated 23,673,200 trees used from her book series. This is far beyond any other authors on this list, with Dan Brown coming in second with approximately 6,314,400 trees cut down to make his novels – 17,358,800 less than Rowling!

In places three, four and five are Leo Tolstoy, Cao Xueqin and Shere Hite who all had books on the bestseller list. They have each cost Mother Earth 4,410,000, 3,520,000 and 3,190,000 trees, respectively. Even with these figures combined, they cannot reach the whopping number J.K. Rowling has reached. 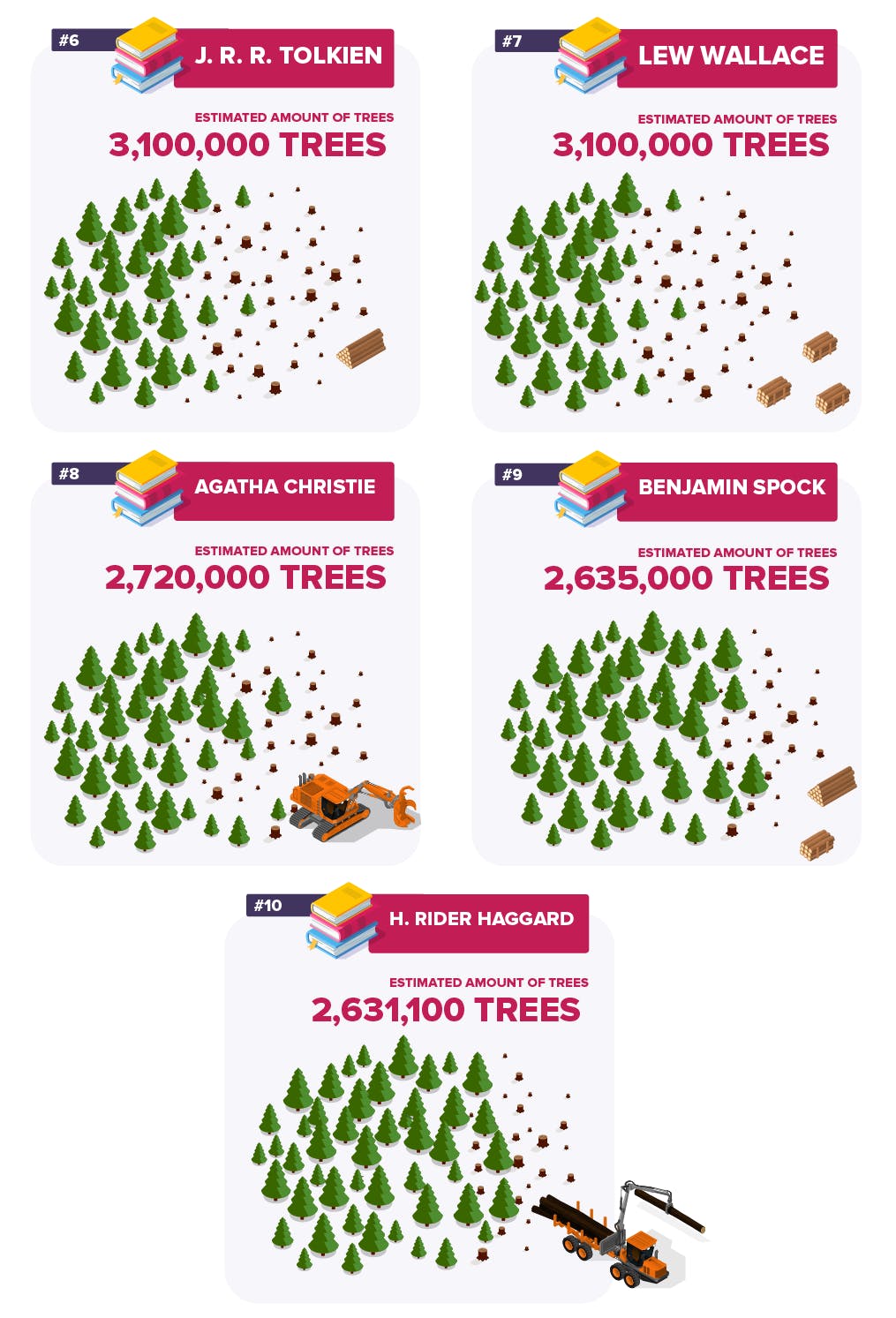 Looking at the other end of the list, H. Rider Haggard (number 10) and paediatrician Benjamin Spock (number nine) are the least responsible for mass tree felling with around 2,631,100 and 2,635,000 trees being used for their books.

Although Agatha Christie’s influence spans decades, her environmental impact is quite low on our list – sitting at number eight – as approximately 2,720,000 trees are cut down for people to enjoy her murder mysteries.

J.R.R. Tolkien and Lew Wallace complete the bottom five, as their epic novels are both accountable for the loss of 3,100,000 trees each.

Top 10 genres costing the most trees

We all have a favourite genre and some of us rarely stray outside of it. Whether this is a keen love for fantasy adventures or a focus on non-fiction, our preferences all have an effect on our planet’s natural resources. The number one genre responsible for the cutting down the largest number of trees used is fantasy. With the number of pages needed to build these complex worlds, it’s no wonder they use an estimated 33,528,700 trees. Trailing behind by quite a substantial amount is novels, causing the felling of an estimated 9,408,040 trees. In place three is Family Sagas – our love of family chronicles bringing about the demise of approximately 5,803,600 trees. 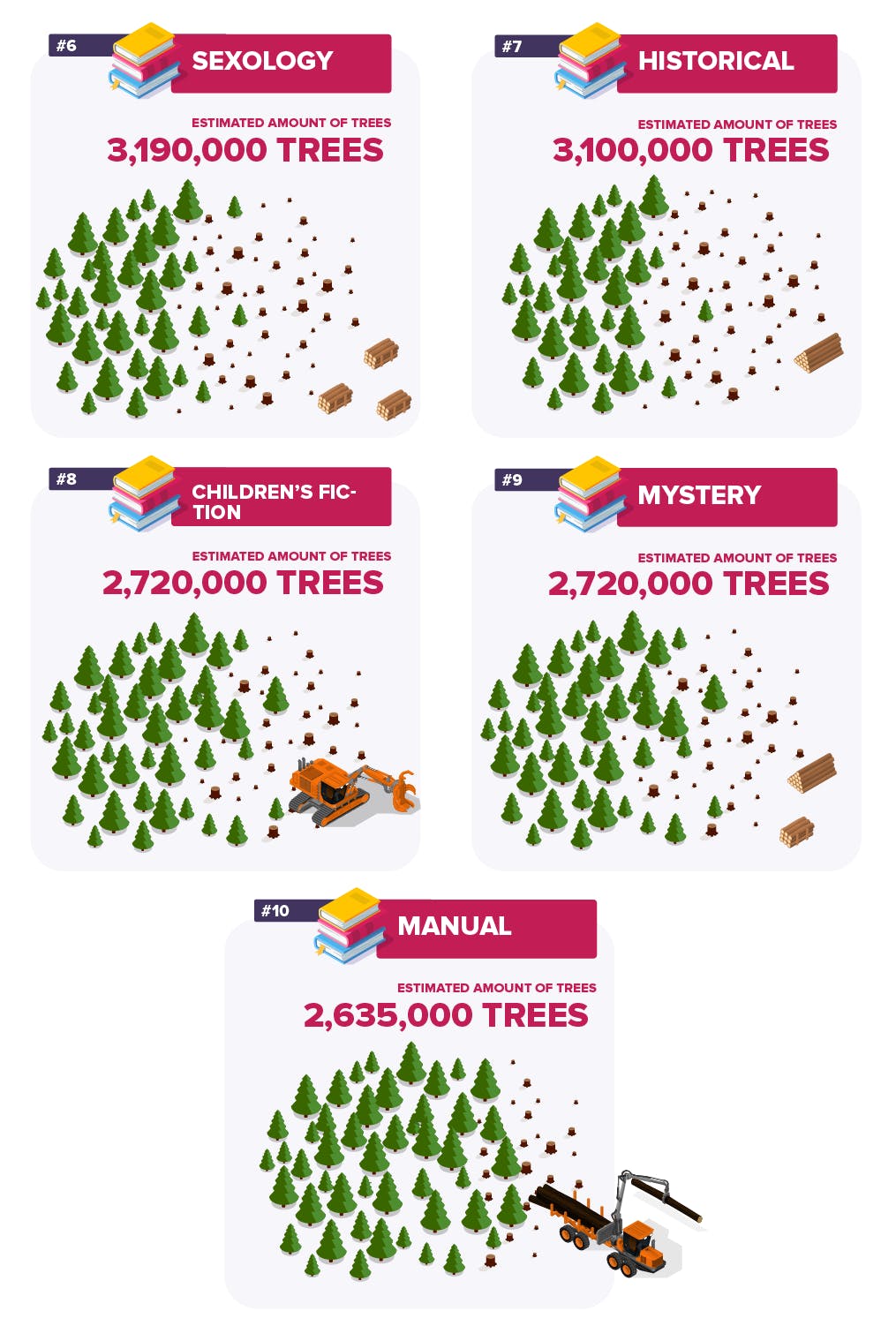 Manuals are out the end of our list, with an estimated 2,635,000 trees used to create these books. Although the number and impact is much lower, it is still enough to fill over 241 acres of land.

Mystery and children’s fiction are both the cause of 2,720,000 trees being cut down – it seems we love a gripping whodunnit just as much as younger audiences like to settle down with a book.

And, at number six and seven on this list, are historical and sexology. Both include a considerable amount of research, expert comments, and require 3,100,000 and 3,190,000 trees taken from Mother Earth to produce these best-selling books, respectively.