It’s difficult to imagine life without Netflix - few could have predicted that the DVD mail rental service would grow into the Oscar-winning entertainment behemoth it now is.

Statistics show that Netflix now has over 158 million subscribers worldwide. Cisco’s Visual Network Indicator predicts that online videos will account for 82% of all internet traffic by 2022. Just like any online activity though, streaming is energy-intensive. For people to watch content from somewhere like Netflix on their smart devices, data has to travel through a vast network (i.e. cables, routers, data centres etc.), which consumes a huge amount of energy. With energy being generated from electricity, a by-product of burning fossil fuels such as coal and oil, this can produce a lot of harmful carbon dioxide, despite an increase in the availability of renewable energy tariffs.

Save On Energy used official Netflix viewership figures to discover the equivalent of watching Netflix’s top movies and shows in terms of miles driven by a car and the amount of carbon dioxide (CO2) subsequently emitted.

The titles included in this research are those ranked by Netflix as its top ten movies and top ten shows between October 2018 and September 2019, based on overall viewership figures. All the movies and shows in the list are Netflix Originals, meaning they have been commissioned and produced by Netflix itself. 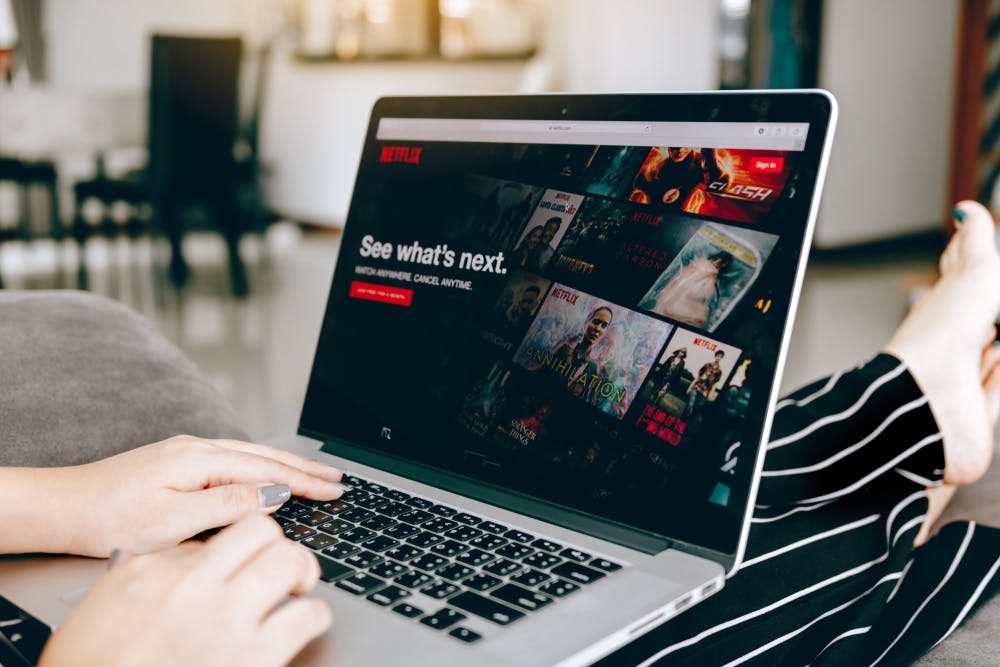 What impact does streaming Netflix movies have on the environment?

Save On Energy found that the energy generated from 80 million views of the thriller Birdbox is the equivalent of driving over 146 million miles and emitting just above 66 million kg of CO2. To put that into context, it is equal to driving from London to Istanbul and back 38,879 times. 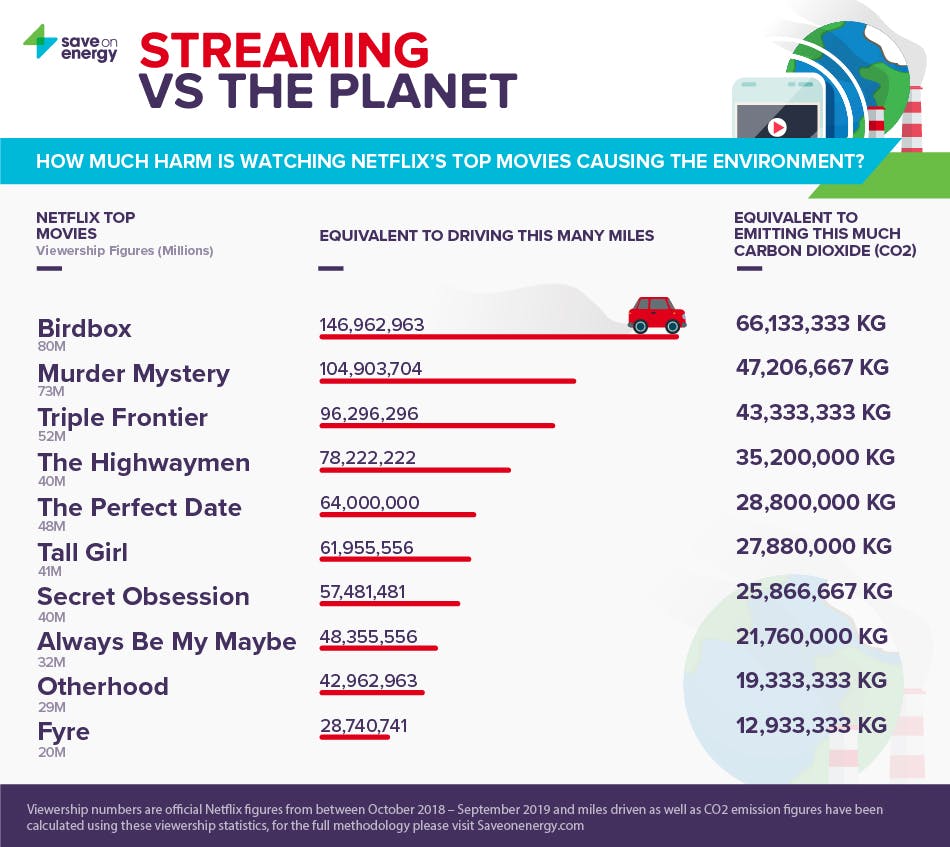 Thereafter, the energy produced from 73 million streams of Adam Sandler’s Murder Mystery translates to driving more than 104 million miles and emitting over 47 million kg of CO2. Since taking a plane from London (United Kingdom) to Los Angeles (United States) and back generates 1,650 kg of CO2 per person – this means an individual needs to fly 28,610 times from London to Los Angeles to produce the same amount of CO2 amassed by those who have watched Murder Mystery so far.

In third position, the energy accumulated from 52 million views of the action-packed Triple Frontier is comparable to driving over 96 million miles and just above 43 million kg of CO2. This means the miles clocked for Triple Frontier are approximately the same as driving from New York to San Francisco and back 16,591 times.

What impact does streaming Netflix shows have on the environment?

Save On Energy discovered that the energy produced from the 64 million streams of the third season of Stranger Things is comparable to driving more than 420 million miles and emitting over 189 million kg of CO2. To make that more digestible, it is the equivalent of driving from Marrakech to Cape Town and back 28,391 times. 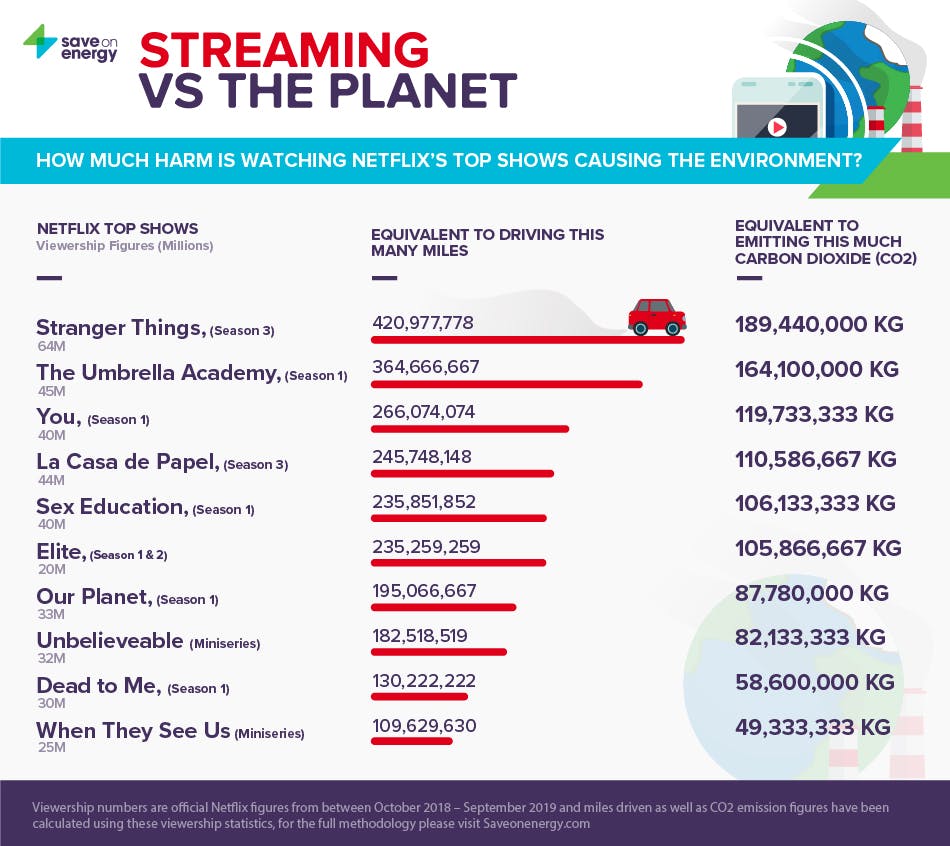 Subsequently, the energy garnered from 45 million views of first season of Umbrella Academy translates to driving over 364 million miles and emitting over 164 million kg of CO2. Since flying from London to Perth (Australia) and back produces 3,153 kg of CO2 per person, this means an individual would need to fly 52,046 times from London to Perth and back to produce the same amount of CO2 generated from those who have watched Umbrella Academy thus far.

Methodology for the research

1) Using two reputable sources to base the foundation of our study on: One from Shehabi et al. - who found that streaming a video for 30 minutes resulted in CO2 emissions of about 0.2 kilograms (kg) and another from Inês Azevedo, who stated that driving for 30 minutes in a car that gets 25 miles to the gallon will roughly emit 1.8 kg of CO2 over the course of four miles.

2) The top 10 most viewed movies and shows on Netflix between October 2018 and September 2019 were identified and then the run time for each of them was calculated in minutes.

3) The total minutes for each of the movies and shows were then divided by 30 minutes and after, multiplied by 0.2 to arrive at a CO2 emission per person figure when watching that given Netflix movie or show.

6) It should be noted that Netflix measures viewership as one-member account watching at least 70% of a movie or episode of a show (this is the measure Netflix used to count viewership between October 2018-September 2019). But given that 70% of total run time is still a significant proportion of time and one that demonstrates a strong intention to completely finish watching a movie/show – so for this study, we have used the full minutes for each of the Netflix movies and shows included.

9) Whilst this research focused on Netflix, it should be noted that viewing movies/videos on other popular online video services is also likely to lead to CO2 emissions, due to the extensive energy required to successfully stream the content from them.