Where are the UK’s most eco-friendly high streets? 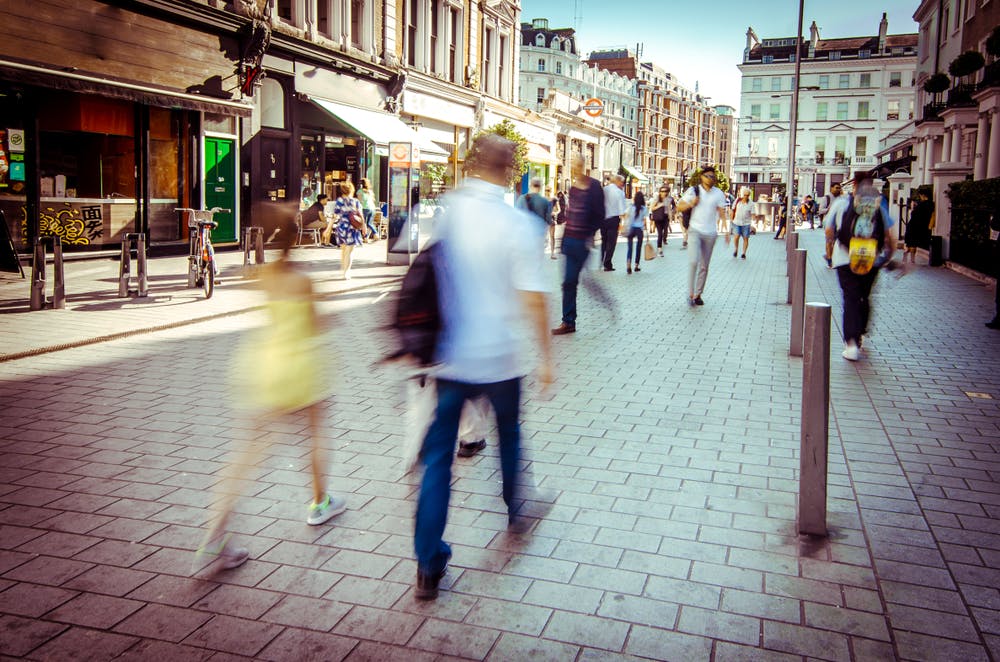 An increasing number of Brits are seeking to embark on a more eco-friendly lifestyle today, and this growing popularity is reflected on Britain’s ever-evolving high streets, with a marked increase in vegan eateries, independent businesses and health shops. But which high streets have most adapted to meet this new demand?

Intrigued to uncover which UK high street is home to the most eco-friendly residents and amenities, energy switching site SaveOnEnergy conducted a study and devised a point-based Eco-Rate Index to calculate the most and least eco-friendly high streets in the UK.

SaveOnEnergy have taken account of 9 different variables that commonly relate to eco-friendliness and devised a scoring system to rank each high street.

The most eco-friendly high streets in the UK 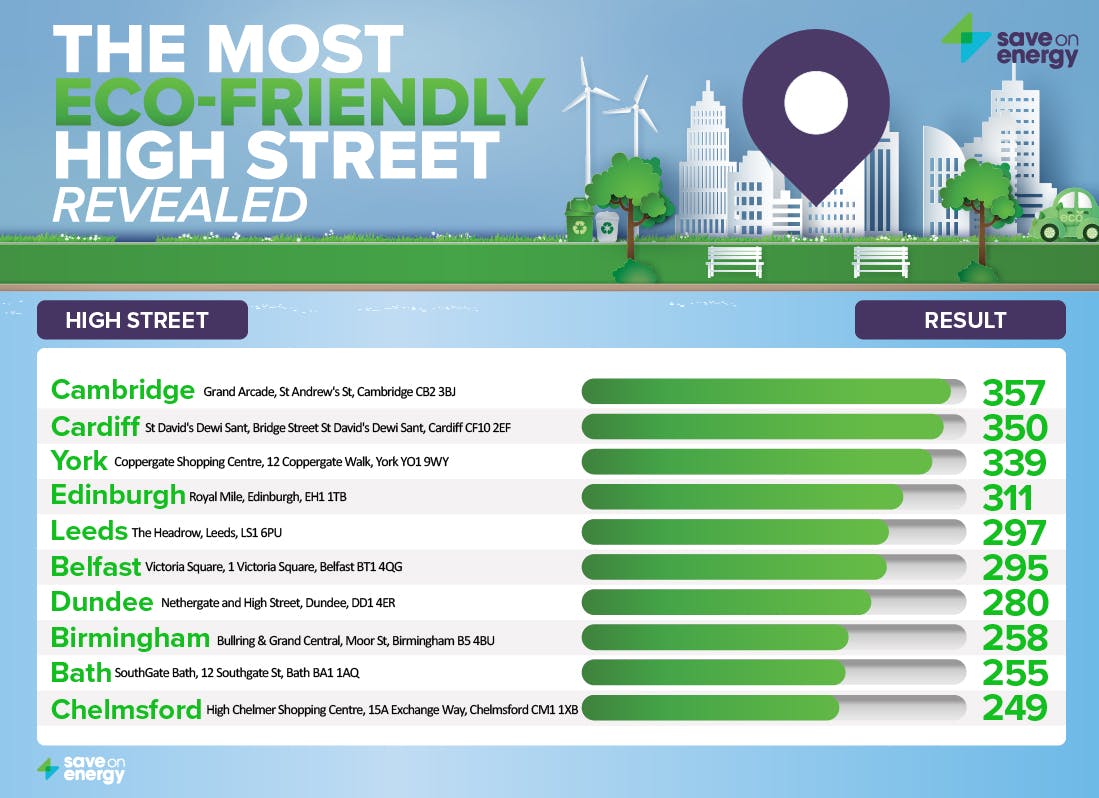 Leading the way with the most eco-friendly high streets were Cambridge, Cardiff, and York.

The premium shopping destination was also home to only 78 fast food restaurants – 107 less than London’s Oxford Street, the fast food hub of the UK. This means that 107 points were deducted from its overall score. These factors left Cambridge with a final score of 357 points overall, crowning it the most eco-friendly high street in the UK.

Placing second is Cardiff, seven points short of the top spot. Boasting the most charity shops of all cities surveyed and an impressive nine recycling centres, it is no surprise that St David’s Demi Sant ranks as the second most eco-friendly place to live and shop.

Although Cardiff offers only a quarter of the green space that Cambridge does, and has the worst air quality ranking, it appears that its 142 vegan eateries and 14 charging stations help Cardiff to score highly with a strong total of 350 points.

Rounding off the top three, York’s Coppergate Shopping Centre racked up a total of 339 eco-points. Offering the fourth highest number of vegan eateries (162) and second most local green spaces in the UK (20), York is awarded the title of the third most eco-friendly high street – even despite having 140 fast food outlets!

The least eco-friendly high streets in the UK 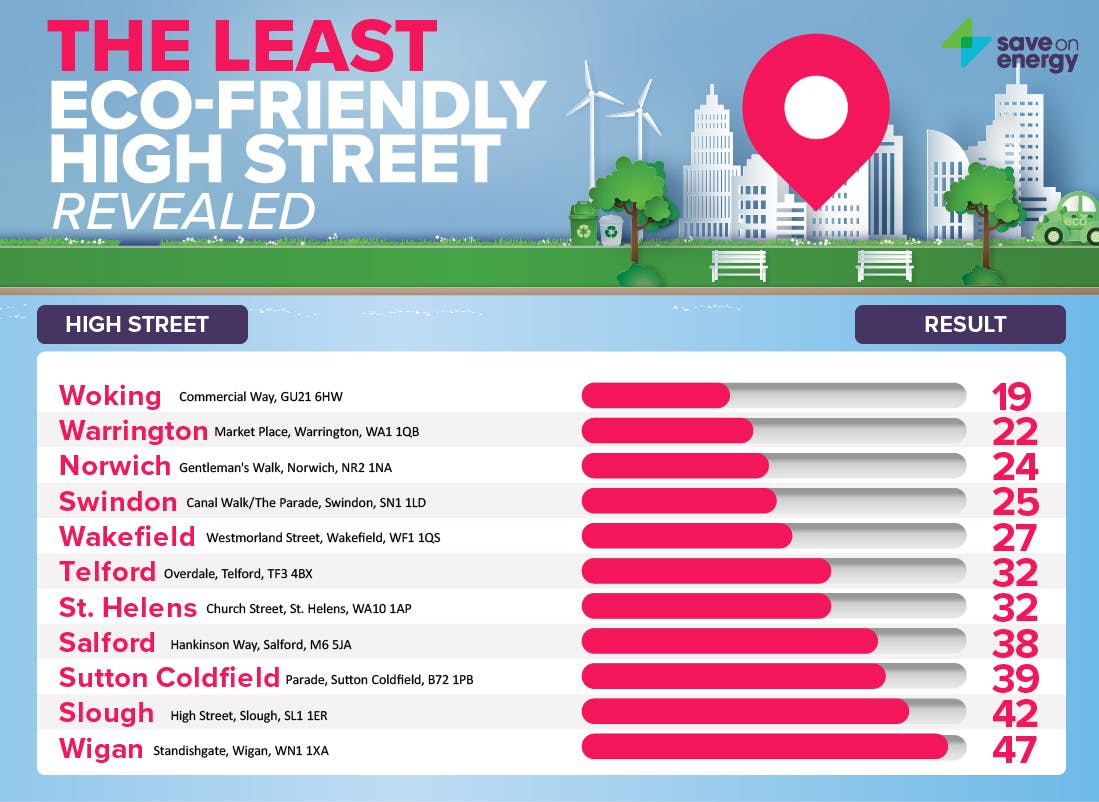 SaveOnEnergy’s index also revealed the least eco-friendly high streets in the UK. Our research can exclusively reveal that the lowest scoring high streets were located in Woking, Warrington, Norwich, and Swindon.

The recently reinvented Commercial Way in Woking is the least eco-friendly high street in the UK. With only one recycling centre, one independent store and four charity shops, Woking scored an incredibly low score of 19 points overall – a staggering 338 less than Cambridge.

Woking also suffers from very poor air quality, causing the high street to lose a further two eco-points. SaveOnEnergy also found Woking’s high street to be home to 60 fast food restaurants and only had 20 vegan-friendly eateries - far less than the average high street across the UK.

Warrington is the second lowest scoring city in our Eco-Rate Index, with only three points more than Woking. With only one recycling site and one charging station between a population of 100,000, it is unsurprising that Warrington scores so poorly in terms of eco-friendliness.

Marginally stealing the position of the third least eco-friendly high street from Swindon is Norwich, which scored one less point than Warrington, with 24. Gentleman’s Walk in Norwich offers residents very few local green spaces and has poor air quality. Norwich’s score was hindered further by the fact it was home to almost double the UK average of fast food takeaways, resulting in a substantial deduction of 112 points.

Closely behind in fourth is Swindon’s Canal Walk, with just one recycling centre and only 15 eateries suitable for vegans, scoring 25 points. Meanwhile Wakefield placed as the fifth least eco-friendly high street, scoring just 27 points, with no recycling centres and no independent stores.

How do we calculate the scores?

SaveOnEnergy’s Index is a points-based system whereby a high street is allocated a certain number of points for each ‘eco-friendly’ amenity available within 10 roads of the high street. Points are deducted for each amenity deemed not to be “eco-friendly”, such as having a large number of fast food eateries or poor air quality. Using this method, the points awarded or deducted range from between -2 to three.

The number of points awarded for each facility depends on how strongly the amenity reflects eco-friendly living and the impact each has on the environment. For example, recycling centres and electrical charging points are awarded the most points since these have the most direct impact on the environment. Meanwhile, health food stores, which have a slightly weaker correlation, are only awarded one point per amenity.

The total Eco-Rate score for each high street is an accumulation of the added and deducted points for all facilities studied.

The high streets home to the most…

Bradford and Brighton’s high streets are home to the most recycling centres for clothing and waste across the UK, with 14 each. Despite this, neither locations placed as the five most eco-friendly high streets. Bolton, Belfast, and Bristol also have more recycling centres when compared with the average high street, with 12, 11 and 10, respectively. 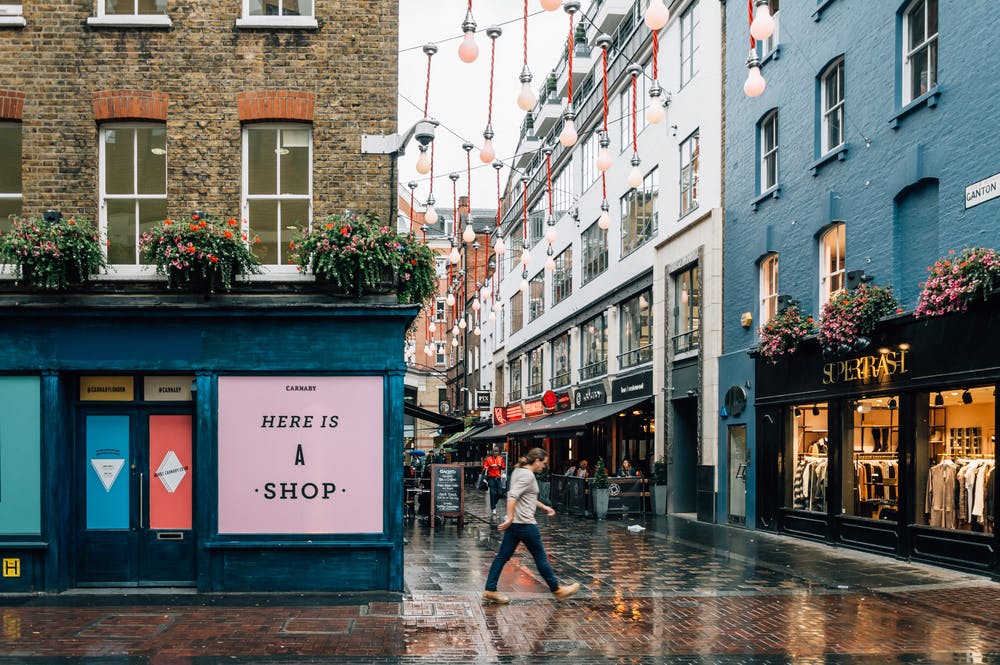 SaveOnEnergy found The Headrow in Leeds to be home to the most vegan eateries in the UK, totalling an impressive 181 vegan-friendly places to grab a bite. Meanwhile, all other contenders were located north of Birmingham, including Edinburgh (167), York (162), Manchester (155), and Birmingham itself with 144 places to dine as a vegan.

Our research can reveal that the five thriftiest high streets are Cardiff, Blackpool, Nottingham, Brighton, and Derby - all of which are home to 20 charity shops each. With the highest number of charity stores located on these cities’ high streets - they are certainly the place to go if you are looking for sustainable items and eco-friendly shopping. Also, instead of binning any unworn clothes, make sure to give them to charity shops to help the environment.

Alongside recycling centres, Brighton is also home to the most health food stores, with 20 around Churchill Square shopping centre. Shortly behind with two fewer was Bristol’s Cabot Circus, where 18 health food stores are situated. Meanwhile Edinburgh offers 15, Bournemouth offers 14 and Cardiff and Cheltenham both offer 12 stores each. 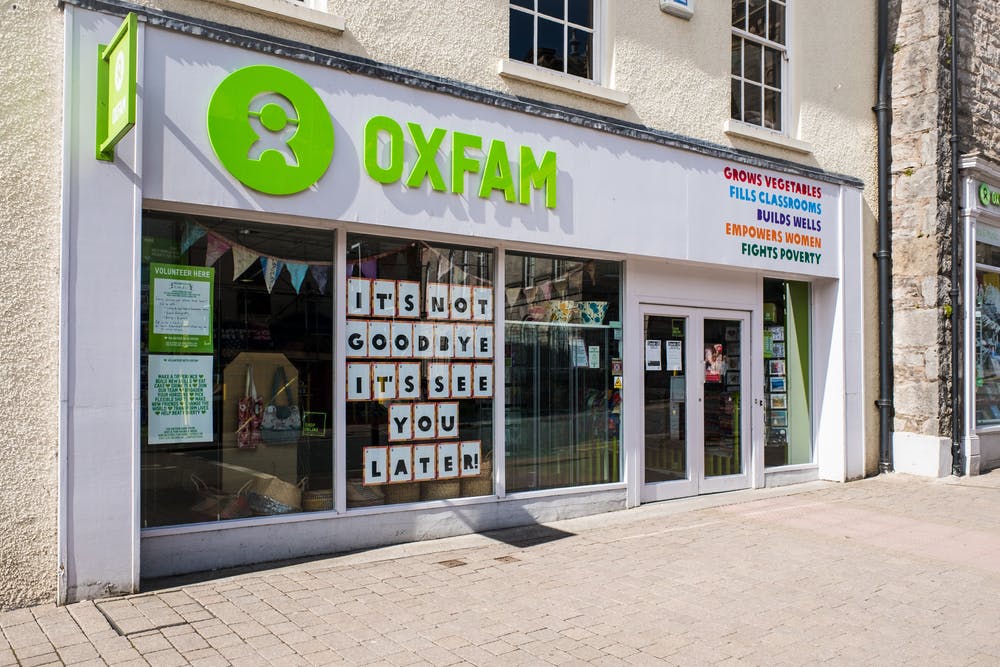 With an impressive 64 local green spaces, Cambridge’s Grand Arcade is the high street with the highest quantity of green space areas by a long shot - over 10 times the UK average.

Despite having less than a third of the green space boasted by Cambridge, York comes second with 20 local green spaces. Thereafter places Coventry (16), Cardiff (15), and Newcastle and Oxford with 14 – Oxford is also home to one of the most eco-friendly staycations in the UK too.

Bristol’s Cabot Circus and Brighton’s Churchill Square were both home to the most charging stations for electric vehicles, with 19 each. Dundee, Derby, Sunderland, and Milton Keynes followed closely behind, with 18 charging stations each. 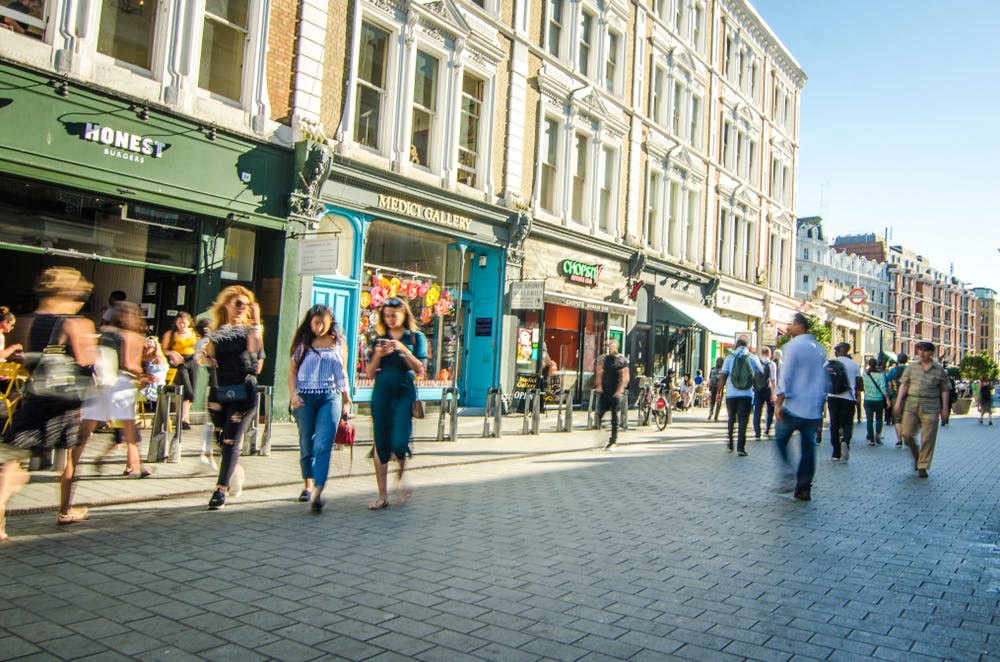 London’s Oxford Street, a tourist hotspot, fared badly in our Eco-Rate Index by coming out on top as the high street with the most fast food outlets. It's home to 185 fast food outlets - over 100 more than vegan-friendly eateries!

Edinburgh followed shortly behind, with 176 hotspots for fast food. York, Birmingham, and Leeds came next, with 140 fast food spots located on York’s High Street, meanwhile Birmingham and Leeds’ high streets each had 121.