Which areas in the UK produce the most CO2 from failed driving tests?

What learner drivers may not consider as they nervously sit down in the driving seat is the environmental impact of their tests if they fail, and specifically how much CO2 these failed tests emit. Interested in the environmental impact of failed driving tests, energy switching site SaveOnEnergy investigated which areas of the UK are potentially the worst culprits for producing CO2.

To find out which areas are the worst polluters, we discovered which areas of the UK failed their driving tests the most between April 2019 and July 2020, before calculating how much CO2 was potentially emitted in each area due to unsuccessful driving tests. We then ranked the areas producing the most CO2 from failed driving tests in the UK, England, Scotland, and Wales.

How much CO2 failed tests emit in the UK overall

October to December 2019 were busy months for driving examiners, with 425,002 tests conducted in this time. Out of these, over half were in vain, with 232,429 driving tests failed in this time period. These unsuccessful tests resulted in an estimated 537,029 kg of CO2 emissions; the same amount produced by charging 68,488,540 smartphones.

July to September 2019 was also a disappointing time for learner drivers, as our research discovered that there were 219,402 failed tests. Not only did these individuals fail to secure their license, but they were also partly responsible for producing an estimated 506,930 kg of CO2 – the equivalent to the energy usage of 58.5 homes for one year!

In fact, the number of learners proving unsuccessful during their driving examinations is so high that the estimated CO2 produced from failed tests in the UK from April 2019 to July 2020 (2,005,018 kg) produces the same number of emissions as over 400 return flights from London to Melbourne in economy class.

You may also like: The areas of the UK emitting the most and least CO2 from their properties

We analysed the number of failed tests at driving test centres in England to determine which areas in are potentially responsible for the greatest quantity of CO2 emissions from unsuccessful tests. 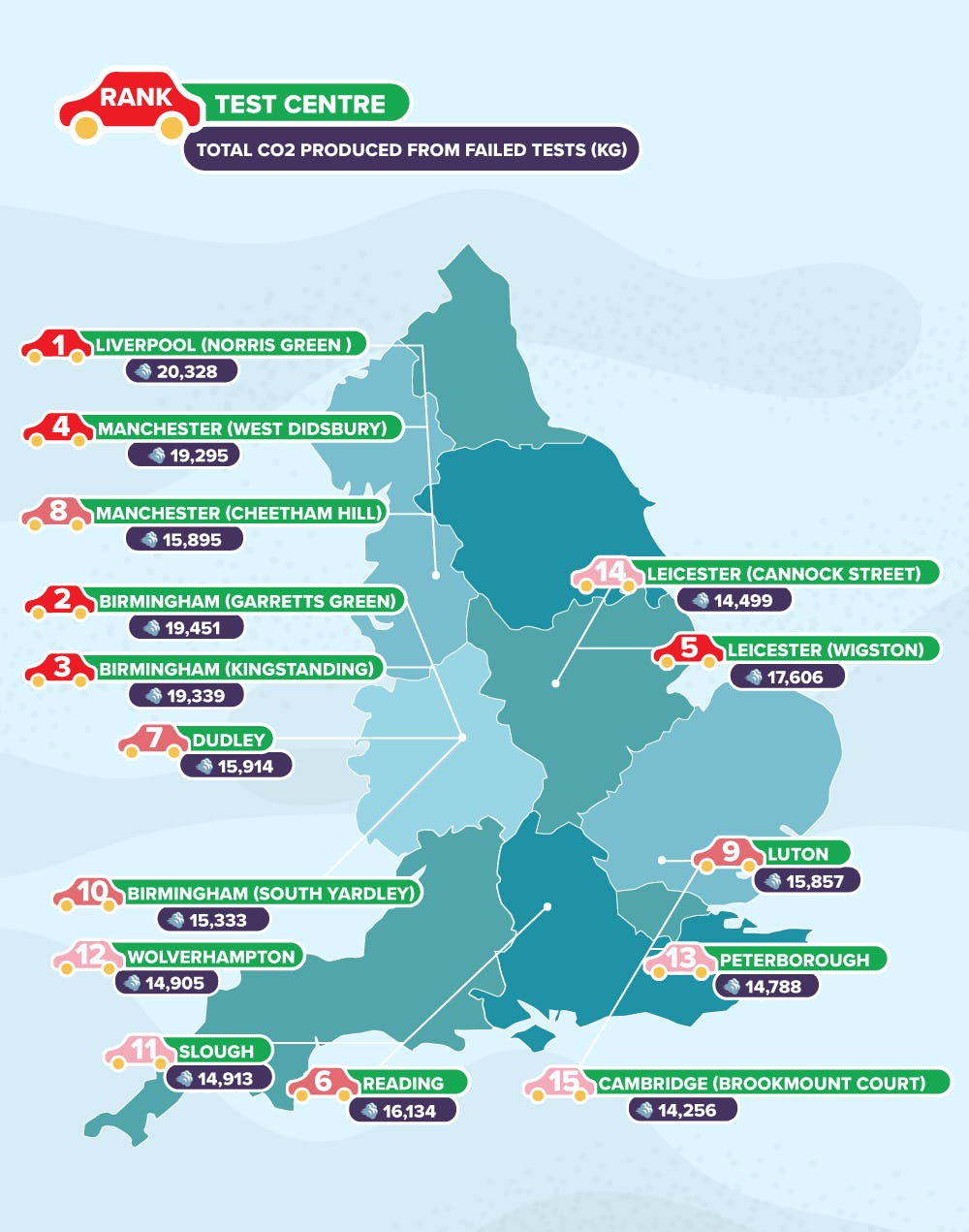 Topping the list of most driving tests failed in England is Norris Green in Liverpool, with 8,800 drivers failing to pass their test between April 2019 and July 2020. The CO2 produced solely from these failed tests comes in at an estimated 20,328 kg, equivalent to travelling approximately 336,400 miles by train – the same as travelling from London to Edinburgh 1,013 times!

Falling just behind is Garretts Green in Birmingham, as the test centre recorded 8,420 failed tests, resulting in an estimated 19,451 kg of CO2. A heavy meat eater would need to spend over £22,000 a year just on food and drink products to reach the same carbon footprint.

At number three, four and five is Kingstanding in Birmingham (producing an estimated 19,339 kg of CO2), West Didsbury in Manchester (estimated at 19,295 kg) and Leicester in Wigston (estimated at 17,606 kg) respectively.

Following these is Reading, which saw 6,984 tests failed between 2019 and 2020. The environmental impact of these is roughly the same as the energy used within 1.8 homes a year.

The areas in London producing the most CO2 from failed driving tests.

We also analysed the data available for London, to determine which local areas were potentially most responsible for producing the most CO2 from failed tests. 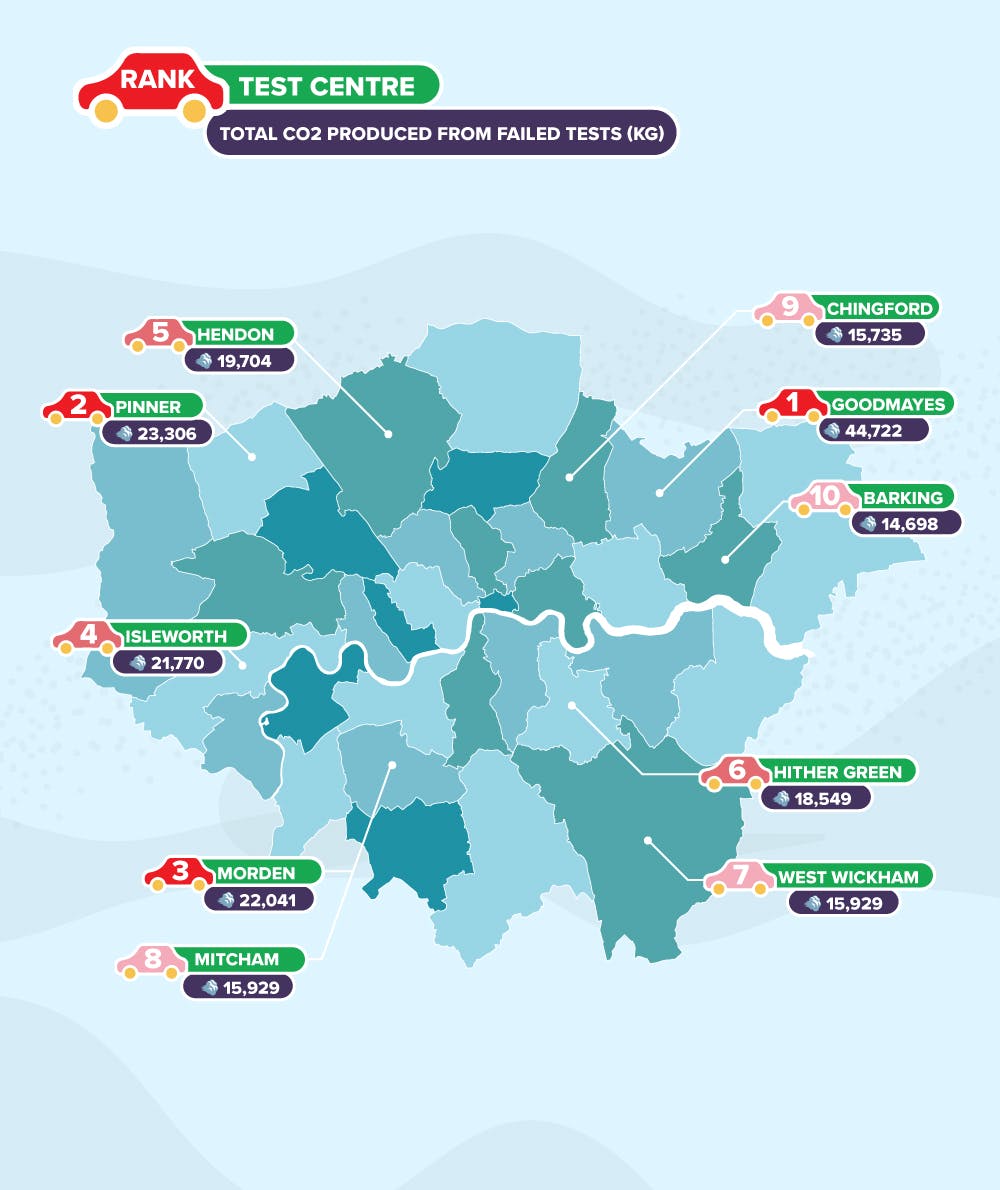 Goodmayes comes in first with 20,517 tests failed in 2019 and 2020, resulting in an estimated 44,722 kg of CO2 being released. In second place is Pinner, with 10,089 unsuccessful tests being recorded in the same time period – half that of Goodmayes in first place. The estimated amount of CO2 produced from learners failing their driving tests (23,306 kg) is the same as consuming 2,289 gallons of diesel.

You may also like: Where are the most eco-friendly high streets in the UK? 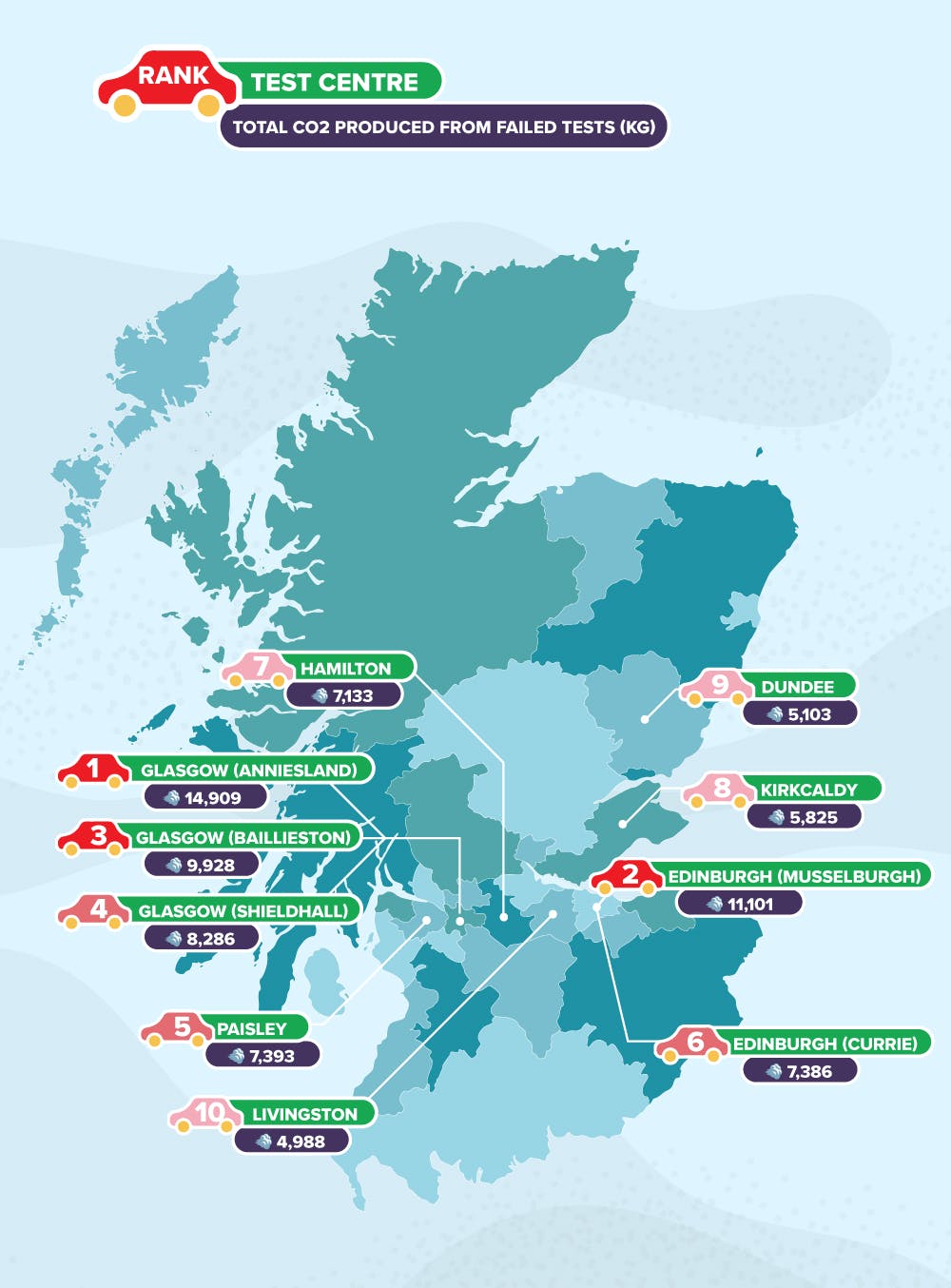 Scotland is slightly less guilty of CO2 emissions from failed driving tests than London, with the Anniesland test centre in Glasgow recording 6,465 failed tests. These examinations resulted in an estimated 14,909 kg of CO2 emissions being produced. For the same amount you could charge 1,901,349 smartphones to 100%.

Following behind Anniesland is Musselburgh in Edinburgh, where 4,814 tests were failed. Our analysis reveals that these failed tests lead to an estimated 11,101 kg of CO2 emissions being produced.

Places three and four go to Baillieston and Shieldhall in Glasgow. In Baillieston 4,305 learner drivers failed their test between 2019 and 2020, causing an estimated 9,928 kg to be produced from failed tests. By comparison, Shieldhall recorded 3,593 failed tests, which we estimate to have produced around 8,285 kg of CO2. 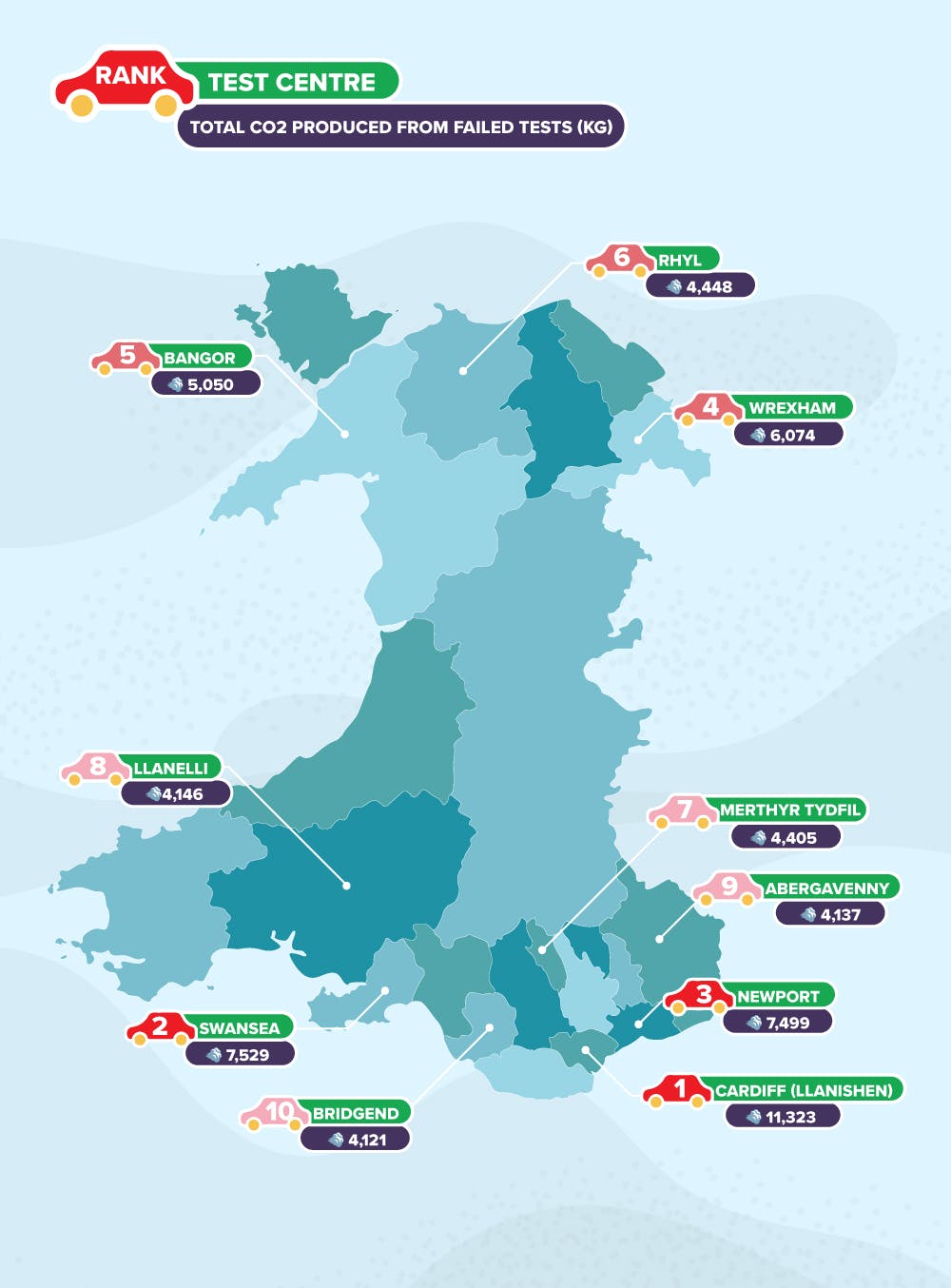 When people think of Wales, they may think of rolling hills, open spaces, and countryside. What they don’t picture are traffic jams and fog caused by car emissions. However, the top centre for failed tests is Cardiff (4,910) which produced an estimated 11,323 kg of CO2 in 2019 and 2020. This is equal to using 26.2 barrels of oil.

Coming in at number three, and marginally better, is Newport with 3,252 unsuccessful driving tests carried out between April 2019 to September 2020. This is reflected in the estimated amount of CO2 produced at 7,499 kg, less than that of Cardiff but still equivalent to driving 18,609 miles by car.

Places four and five go to Wrexham and Bangor. Wrexham recorded 2,634 failed tests which resulted in an estimated 6,074 kg of CO2, whereas Bangor had slightly less unsuccessful learners (2,190) and released 5,050 kg of CO2.

Men vs. women: Who produces the most CO2 from failed driving tests? 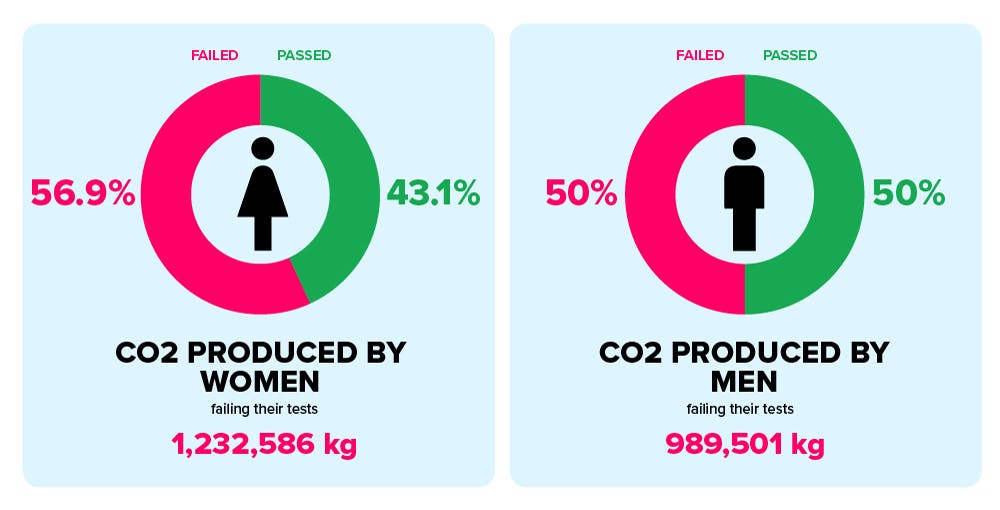 Without getting into the age-old debate of who is the better driver, we crunched the data to find out how much CO2 each gender is estimated to have produced from failed tests between April 2019 to September 2020.

Men have produced slightly lower levels of CO2 from their failed driving tests, at an estimated 989,501 kg, but this is still equivalent to the use of 40,451 propane cylinders for home barbeques. From April 2019 to March 2020 alone, the estimated CO2 emissions (887,857 kg) from males failing their driving tests were equal to driving 2,203,119 miles in an average passenger vehicle.

The impact of Coronavirus

Comparing this to the same months in 2020, there were only 2,816 unsuccessful tests. With the effects of coronavirus cancelling many tests, it is estimated that only 6,506 kg of CO2 was emitted in this period. The lack of driving tests proved beneficial to the environment, reducing total CO2 emissions from failed examinations in the previous year by 86.4%.