Is your gaming habit harming the environment? 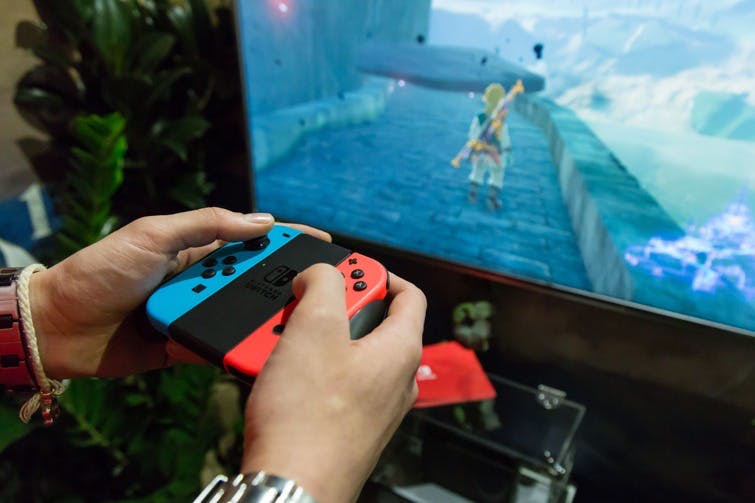 Online video gaming is continuously gaining momentum, with research revealing statistics that there are now 2.5 billion gamers globally and reporting a staggering increase of 63% in the global sale of video games since March alone.

Whilst this is fantastic news for the gaming industry, it paints a slightly less positive picture for the environment. In fact, research by energy switching site SaveOnEnergy highlights an inextricable link between gaming and global warming, finding that certain video games and their play time are proving to have a detrimental effect on our planet. For example, it is estimated that US gamers consume a whopping 34 terawatt-hours of energy every year – a figure which is equivalent to having 5 million cars on the road.

Owing to the fact that the majority of energy is generated by burning non-renewable fossil fuels, which naturally releases harmful carbon dioxide (CO2) emissions, it can easily be seen how video games might continue to contribute heavily to global warming – even despite the availability of renewable energy tariffs.

In light of these facts, SaveOnEnergy decided to study the global best-selling online video games, analysing both their completion times and the average CO2 emissions per hour of play generated across all game consoles, to determine which fan favourites are the best and worst for the environment.

What impact do the best-selling online video games have on the environment? 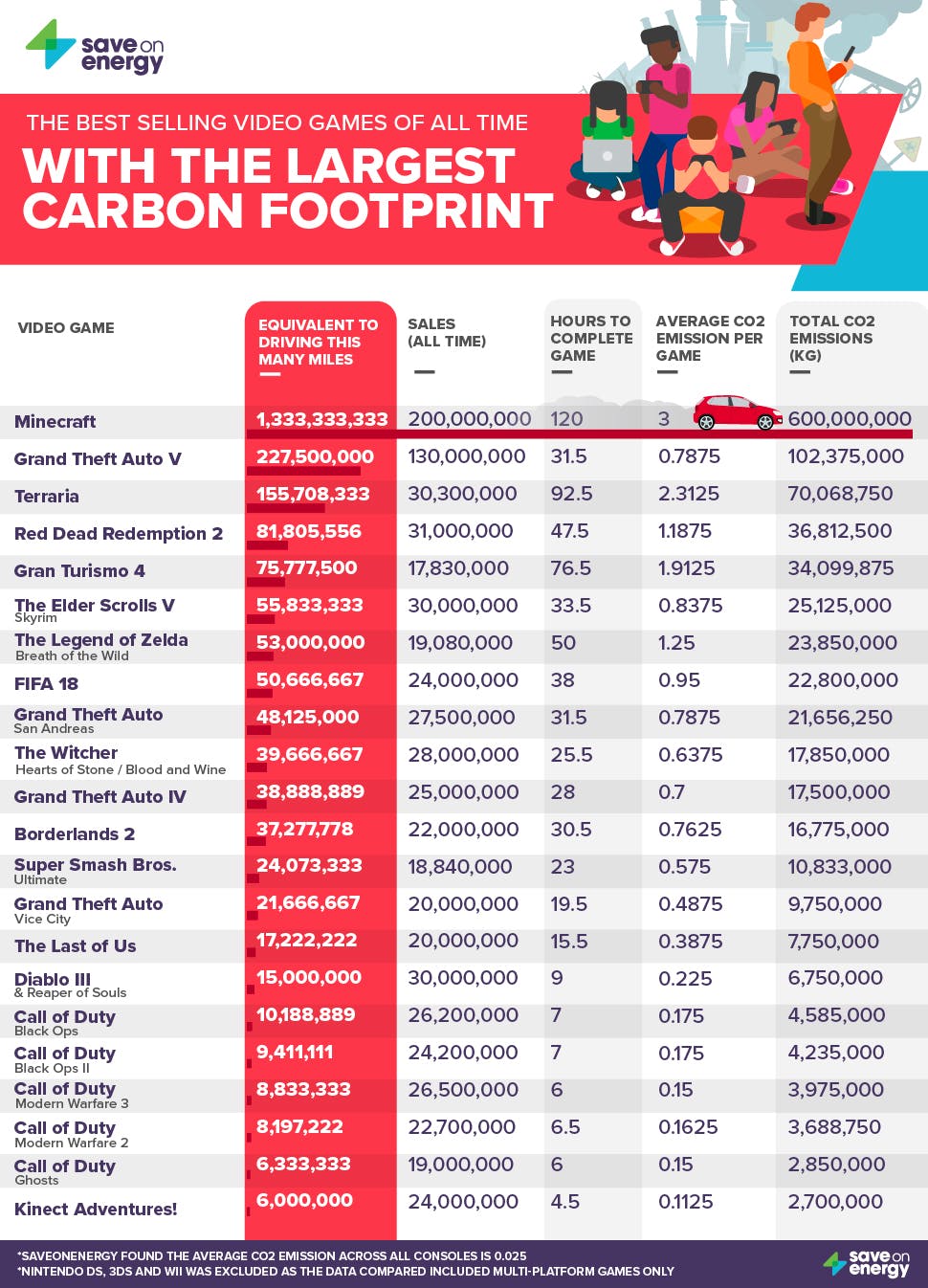 Utilising up-to-date data, SaveOnEnergy found the six best-selling video games on the planet and calculated the damage that these could be causing the environment. Here is how each of the video games fared:

Minecraft ranks in first place as the best-selling and most polluting video game of all time, with CO2 emissions totalling 600 million kg. This ‘total’ figure combines the emissions released by every Minecraft player upon game completion. Minecraft has boasted a remarkable 200 million sales across console platforms since its release in 2011. With the longest completion time of all the games analysed by far (120 hours), it was unsurprising to find that Minecraft also had the highest average CO2 emission per player at 3 kg. Alarmingly, this figure was quantified as equivalent to driving a whopping 1,333,333,333 miles!

In second place with the next highest total CO2 emissions was Grand Theft Auto V, despite the game’s completion time only totalling 31 and a half hours! However, it is highly likely that the hefty total of over 100 million kg released in CO2 from this game is due to its record as the second best-selling game of all time, with 130,000,000 sales since 2013. 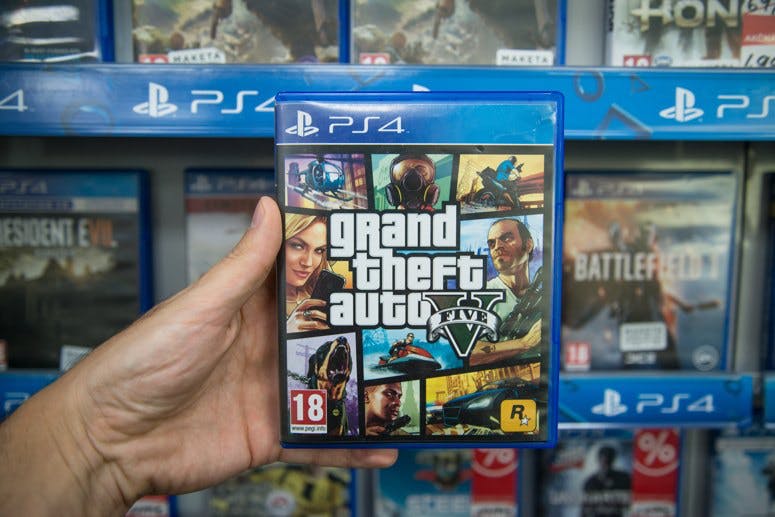 Placing as the fourth best-selling and third most polluting was Terraria, emitting a total of 70,068,750 kg in CO2 emissions. Although Terraria was the third worst polluting video game, it had substantially less sales than the games it followed, racking up a nonetheless impressive 30,300,000 sales and still placing it within the top 6 best-sellers. However, it did have the second longest completion time at 92 and a half hours, leaving it with the second highest average CO2 emission per game also.

Meanwhile, Red Dead Redemption 2, The Elder Scrolls V and Diablo III and Reaper of Souls were also within the best-selling six video games, yet due to significant variance in the hours required to complete each main story, Red Dead Redemption amassed over 30 million kg more in CO2 than Diablo III, demonstrating a very strong correlation between high completion times and CO2 rates.

Totalled up, SaveOnEnergy calculated that the six best-sellers managed to rack up a CO2 mission of 841,131,250 kg between them. In context, this means that in order to amass the same amount of emissions as these games combined, you would have to drive 1,869,180,556 miles. That’s the same as travelling around the world’s circumference 75,064 times!

What are the most eco-friendly video games? 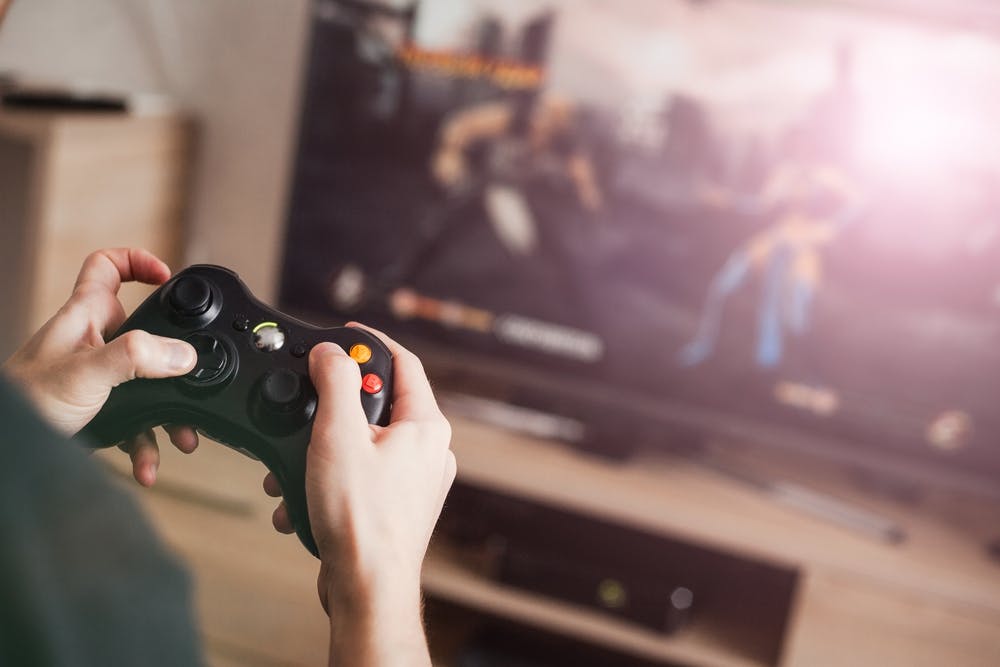 Interestingly, despite achieving a consistently high number of sales, all five of the Call of Duty games studied ranked amongst the lowest polluting games.

For example, Call of Duty: Ghosts was proven to emit the second least CO2 of all games, both on average per game and in total, at 2,850,000 kg overall. Similarly, even Call of Duty’s most purchased game Call of Duty: Black Ops has sales of 26,200,000, but a low-ranking total CO2 emission of 4,585,000 kg. All other Call of Duty variations rank between these.

However, it was Kinect Adventures that was ultimately crowned as the most eco-friendly video game amongst the best-sellers, emitting only 2,700,000 kg of CO2 overall, and boasting the lowest average CO2 emission per game at 0.1125 kg – making it the eco-champion on both accounts.

Reflecting on the data, it is clear that the video games producing the least CO2 emissions overall are those with significantly shorter completion times. According to SaveOnEnergy’s research, the 7 most eco-friendly games also had the lowest completion times, ranging from between 15.5 to 4.5 hours. In fact, Kinect Adventures was ranked the lowest out of all the games studied for both completion time and average CO2 emissions.

Methodology for the research