The city contributing the most CO2 to fast fashion

With fast fashion largely being driven by the rise in online shopping, energy switching site SaveOnEnergy were keen to investigate the extent to which the UK’s searches for online fashion retail brands could be harming the environment.

In a bid to determine which major UK city is potentially producing the most CO2 as a result of the number of fast fashion searches on Google, we analysed both the search volumes for certain fashion retail brands, and the estimated number of emissions created for each visit to these retailers’ sites, to estimate how much CO2 each city could be responsible for each month on average.

The results were based on the assumption that every Google search for a fashion retailer would result in a visit to their website.

Which UK cities emit the most CO2 through online fast fashion store visits? 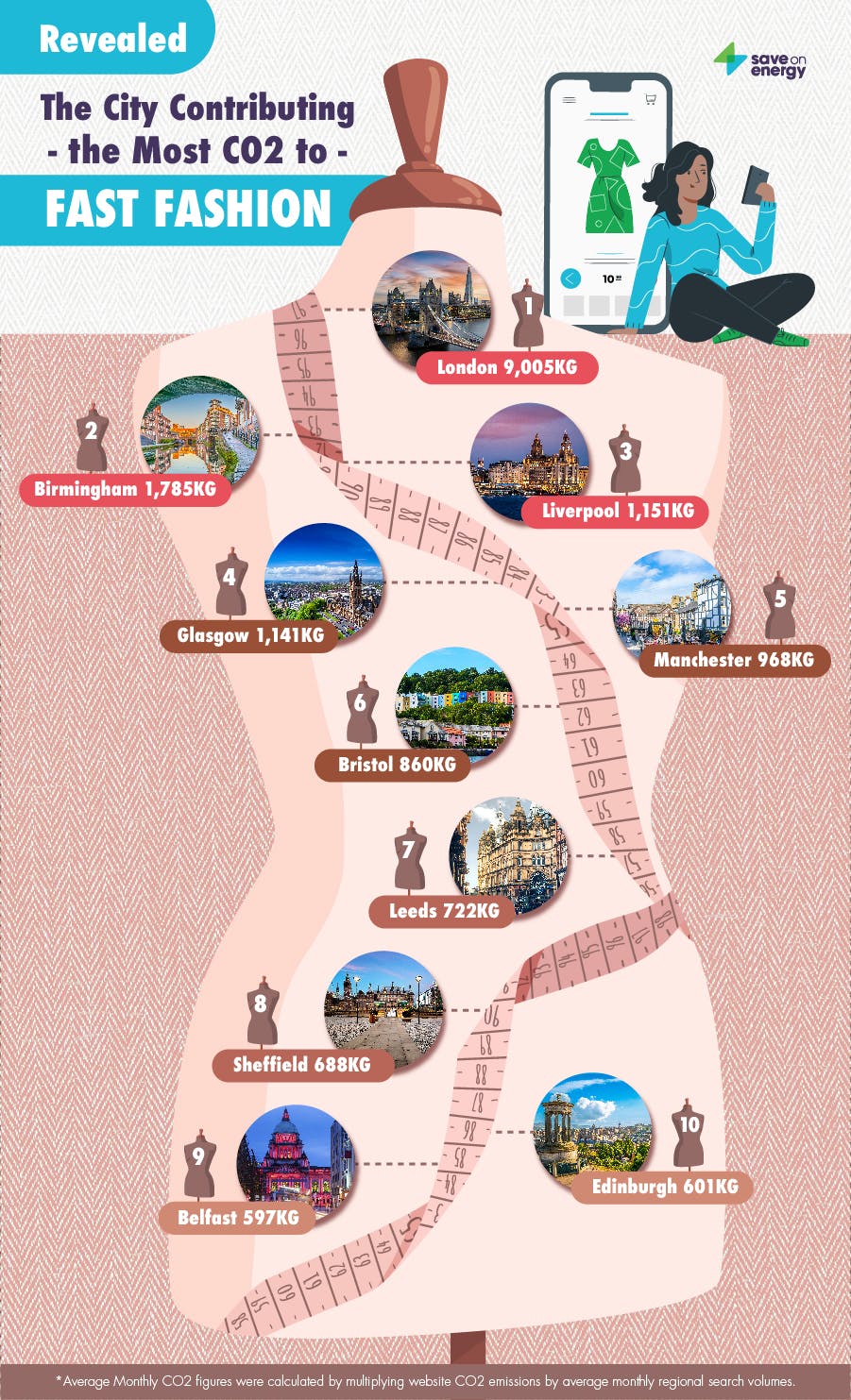 Of all of the UK cities studied, London potentially emits the highest total of CO2 overall, based on the number of site searches for online retailers and their emissions per site visit. In fact, the capital was estimated to emit over 9 million grams of CO2 on average each month. This is approximately equivalent to 9,005kg of CO2 or flying from London Heathrow to Perth and back – twice!

Birmingham potentially emits the second highest amount of CO2, based on their site searches and the emission rate per site visit of these sites. The city’s potential collective emission rate each month is approximately 100kg more than a Tesla Model X, which weighs in at 1,611kg.

Of Birmingham’s most visited or searched fashion sites, the most popular online fashion retailer in the city was Next, which received 110,000 Google searches on average each month. ASOS followed behind with searches reaching an average of 90,500 per month, and New Look with 74,000.

Liverpool was found to produce the third highest amount of CO2 from fast fashion searches, with our study finding that around 1,150kg of CO2 is produced on average each month, assuming that every search for a retailer in the city resulted in a site visit.

In fact, after analysing search behaviour we found that Liverpool’s most searched for online fashion retailers per month, on average, are Next (74,000), River Island (60,500), and ASOS (49,500).
You may also like: Which European countries are home to the thriftiest shoppers?

Which fashion websites produce the most and least CO2 emissions per site visit?

The fashion websites producing the most CO2 per visit: 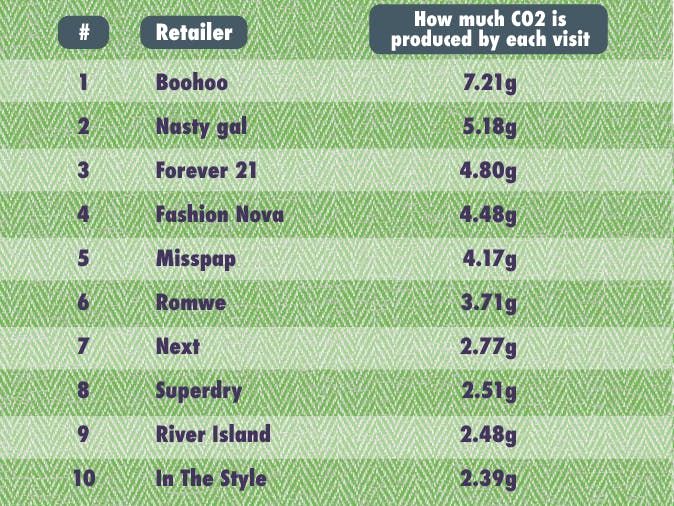 The fashion websites producing the least CO2 per visit: 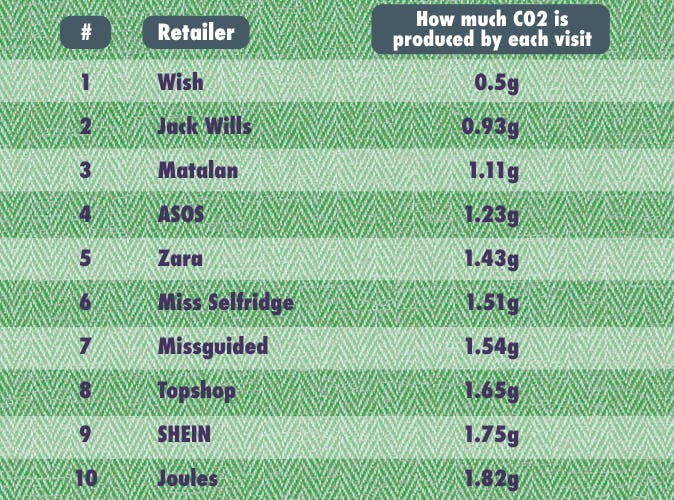 You may also like: Which areas of the UK emit the most and least CO2?

Which online fashion retailers are Googled the most in the UK? 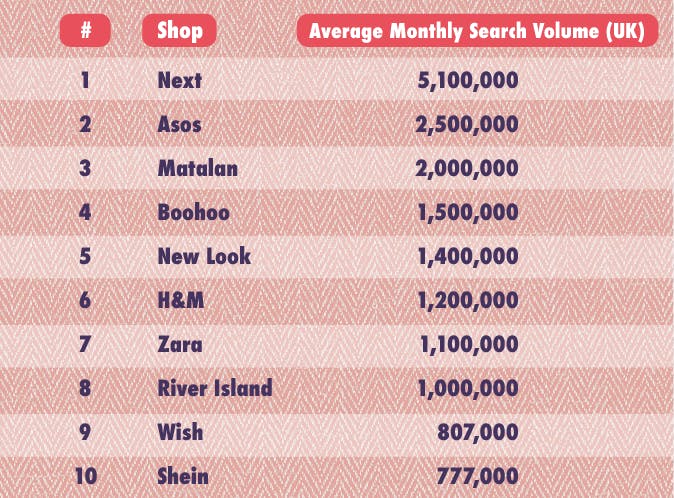 With just 500,000 fewer searches on average each month, Matalan followed behind with 2 million searches on average per month in the UK, making it the third most searched for online fashion retailer studied. Of these searches, Matalan received 135,000 from London, 49,500 from Birmingham, 33,100 from Glasgow, and 22,200 from Sheffield.

The popular online retailer Boohoo comes in fourth after racking up a total of 1.5 million searches on average each month. Of these monthly searches, 246,000 came from London, 60,500 from Birmingham, 33,100 from Liverpool, and 21,700 from Leeds. Meanwhile, New Look ranked in fifth place, with 1.4 million searches made on average each month - 100,000 fewer than online fashion giant Boohoo.

Which fashion websites produce the highest CO2 emissions each month?

To find out which online fashion retailer is potentially the biggest contributor to CO2 emissions, we analysed the total number of searches per brand, alongside the grams of CO2 produced for each visit to their site.

From this, we can estimate the fashion retailers most likely to produce the highest CO2 emissions each month, assuming that every search resulted in a visit to their website. 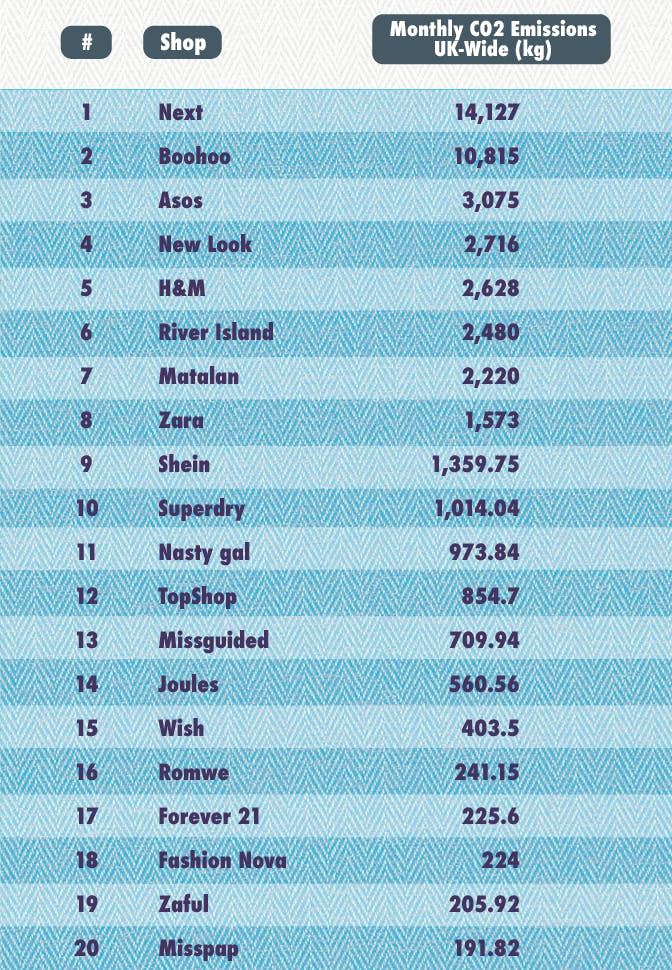 * Please note: Throughout this study, it is assumed that each Google search for each respective shop equates to a visit to their website.