Where are the Highest Rated Coastal Walks in the UK?

Great Britain's coastline is extensive, with approximately 11,073 miles of shoreline awaiting exploration. With warmer months approaching and Brits keen to embark on new adventures, there has never been a better time to treat yourself to a coastal retreat and enjoy the natural beauty that the UK has been blessed with. However, with an abundance of shoreline to be explored, those seeking a coastal walk are spoilt for choice. To help hikers and tourists decide which coastal walk to visit next, energy switching site Save On Energy has discovered and ranked the highest-rated coastal walks throughout the UK, based on TripAdvisor review scores. To do this, we gave each coastal spot a weighted average score, taking account of the number of five-star reviews and one-star reviews, enabling us to award each coastal walk an overall ranking.

The top 10 highest rated coastal walks in the UK 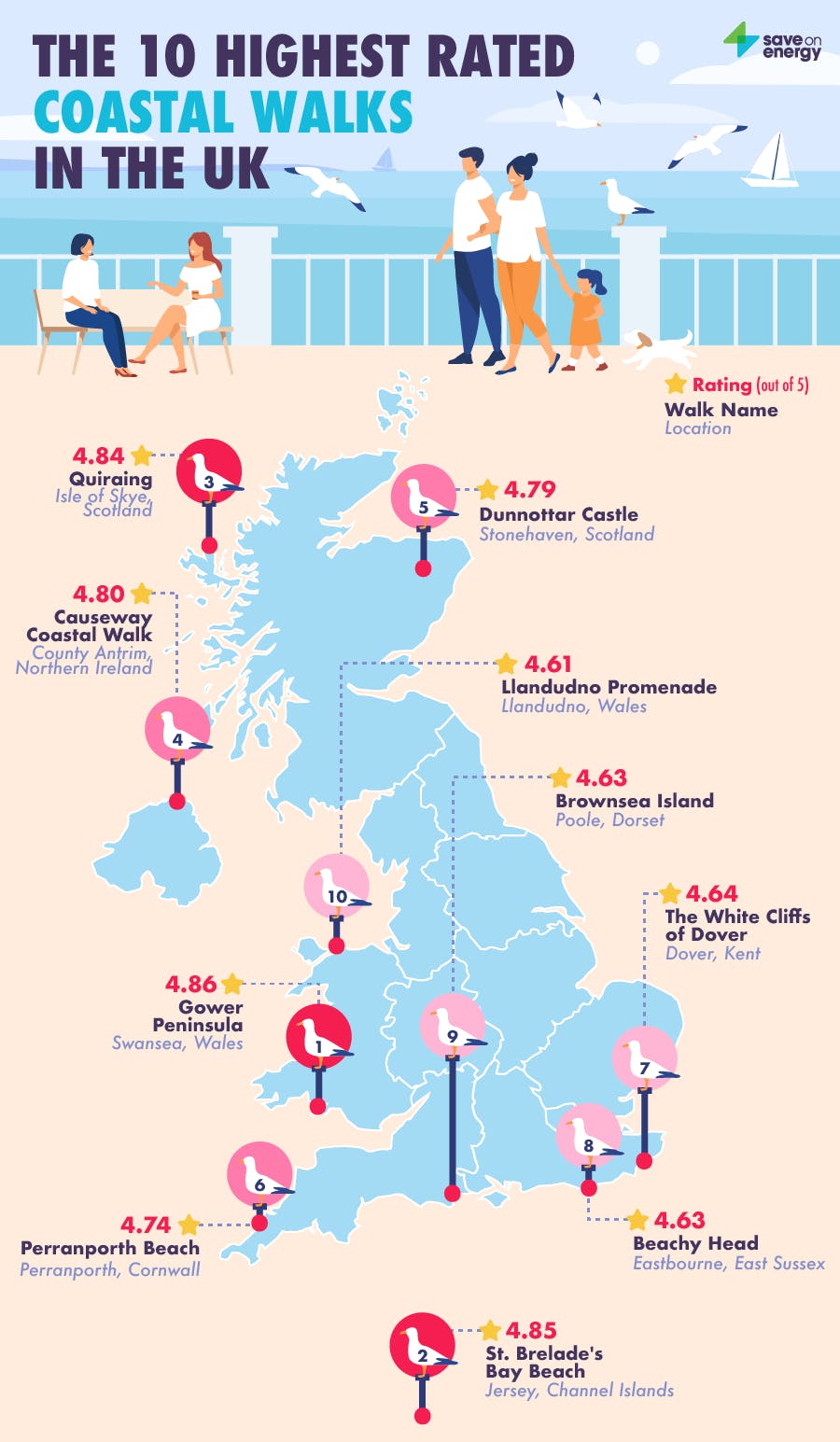 Situated in Wales, the Gower Peninsula was revealed to be the most highly reviewed coastal walk in the UK, having been awarded an impressive overall rating of 4.86 out of five based on the number of TripAdvisor reviews left and the ratings received. Not only was Gower the first destination in Britain to gain the title of an ‘Area of Outstanding Natural Beauty’, but the famous cliffs and woodlands are also laced with hidden coves, miles of golden sand, and rich archaeological history, drawing plenty of tourists, surfers and hikers to the area to marvel at the views.

With a score of 4.85 out of five, St Brelade’s Bay Beach fell slightly short of being crowned the top-rated coastal walk in the UK. The picturesque beach, based on the island of Jersey, boasts breathtaking turquoise seas and a haven of sand, making it perfect for families seeking a coastal retreat. In fact, with a wealth of water sports activities, fresh food, and golden slopes to enjoy, St Brelade’s Bay Beach is a popular location for those looking to indulge in the glorious sunshine and explore the lengths of the bay.

Trailing through some of the most spectacular landscapes that Scotland has to offer, it is no surprise that Quiraing is the third highest rated coastal walk in the UK, with a score of 4.84 out of five. Despite having a similar feel to both Gower Peninsula and St Brelade’s Bay Beach, Quiraing covers a distance of 6.8 kilometres and houses hundreds of unique rock formations for hikers and climbers alike to enjoy. This coastal walk on the Isle of Skye features gorgeous grasslands, dramatic cliff edges, and a fascinating history dating back to its use by the Vikings.

Northern Ireland’s Causeway Coastal Walk ranked as the fourth highest rated coastal walk in the UK, according to TripAdvisor reviews. The Causeway Coast is made up of dramatic cliffs, rich farmlands and stunning waterfalls, but also offers suitable walking routes for both the most novice and advanced walkers. In fact, those that hike the entire coast way often spend two or three days observing the magnificent views. According to our analysis, Causeway Coastal Route in County Antrim, Northern Ireland a weighted rating of 4.8 out of five, taking account for the number of stars given to the popular spot by visitors on TripAdvisor.

Found in Scotland and renowned for its breathtaking coastal cliff scenery, Dunnottar was once home to one of the country’s most powerful families, the Earls Marischal. It ranks as the coastal destination with the fifth highest rating according to our research, having received a score of 4.79 based on TripAdvisor feedback. The photogenic nature of Dunnottar Castle means that not only is it an iconic spot for tourists to flock to, but it is also a popular place to wed, since the ruined medieval fortress oozes romance. In addition to that, the historic appeal of the coastal retreat makes it especially interesting for those that decide to hike through the ruins.

The sixth most highly rated coastal walk in the UK is Perranporth Beach, which can be found in Cornwall. The glorious stretch of coastline is so popular that it achieved a score of 4.74 out of five based on reviews sourced from TripAdvisor. As you journey across the miles of honey-coloured sand, you will find a wide range of amenities, such as pubs, restaurants, and water sports. However, it is the endless sand dunes, secluded coves, and unique wildlife that most entices hikers from across the globe to visit the awe-inspiring coastal site.

According to our analysis, the White Cliffs of Dover is the seventh top-rated coastal walk in the UK, with a score of 4.64 out of five based on the reviews analysed. The dramatic and bright landscape can be found in Dover, Kent and showcases an iconic white chalk face that carries connotations of freedom, home, and wartime defence. Those that visit the natural landmark for a stroll can enjoy not only the geological rarities of the coastal walk, but also the historic tales that are associated with it - such as the return of the British Forces following Dunkirk and the Roman arrivals.

Located in East Sussex, neighbouring coastal walk, Seven Sisters, Beachy Head is the eighth highest rated UK coastal walk, after receiving a score of 4.63 out of five in our study. Not only is Beachy Head home to the highest chalk sea cliff in Britain, towering 162 metres above sea level, but it is also home to many blockbuster scenes, such as those from Harry Potter, James Bond, and even Luther. This alone attracts many hikers and tourists to the coastal hotspot each year.

Branded as one of the UK’s most scenic coastal walks, Brownsea Island is perfect for those looking to explore thriving natural habitats, enjoy the stunning waters, and discover more about the Island’s unique and colourful history of daffodil farming, cattle farming, and ceramics. As one of Poole Harbour’s largest islands, with a wealth of woodland and wildlife, the island is owned by the National Trust who seek to protect the heathland’s residents, big and small.

Rounding off the top 10 coastal walks in the UK is Llandudno Promenade in North Wales, which achieved a score of 4.61 out of five in our study. Spanning almost two miles, the Llandudno Promenade is a popular coastal destination for hikers and tourists. Despite its reputation as a seaside resort, this coastal retreat offers the same tranquillity as many other coastal spots, with a stunning Victorian aesthetic.

The top 20 highest rated coastal walks in the UK

Methodology: 1. To create a definitive ranking, we first compiled a list of the 20 highest rated coastal walks around the UK, according to TripAdvisor. 2. Using the ‘reviews’ section, we discovered the percentage of ‘Excellent’ (5*) reviews and ‘Terrible’ (1*) reviews for each walk studied. We then calculated a weighted average score for each walk based on its number of 1 to 5-star reviews, where a 1-star review was worth one point and a 5-star review was worth five, divided by the total of reviews to find an average score out of 5. 3. The scores for each walk were then used to calculate an overall ranking. 4. A manual inspection of the links ruled out Minack Theatre and Irish Tour Tickets as walk candidates. Data was collected 07/04/2021 and was correct as of then, but is subject to change.