How much CO2e is emitted by drinking tea?

Brits love tea - that's a fact. No matter what the circumstances, we find comfort in drinking a good old cuppa. But how much does our habit impact the environment? SaveOnEnergy sought to find out more about the tea drinking habits of Brits by asking 1,206 respondents about how much tea they are drinking now, compared to how much they were drinking before the lockdown. We then calculated the amount of CO2e* emitted by boiling the kettle daily. 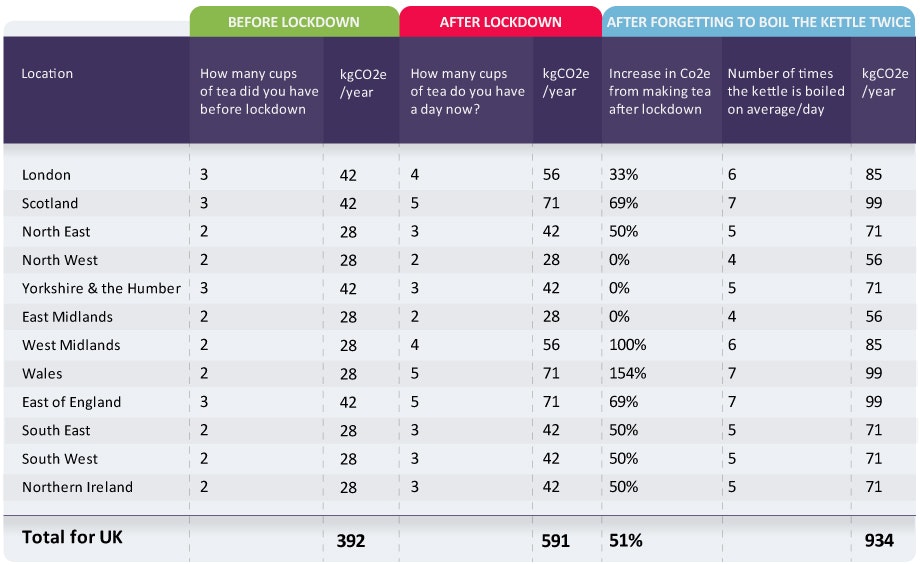 In short, the answer is yes! In fact, our survey reveals that Brits are drinking two more cups of tea a day, on average, than before lockdown.

When looking at the amount of tea Brits drank before lockdown, we found that we were producing 392 kgCO2e/year by just making tea. To put that in perspective, a one-way train journey from London to Scotland would produce around 300 kgCO2e. However, when adding the two extra cups of tea Brits are drinking during lockdown on top of this, the amount of CO2e is expected to rise by 51% (to 591 kgCO2e/year) – that’s almost two train trips from London to Scotland! Not only does this effect the environment, it will result in a rise in utility bills too.

Some regions in the UK are drinking tea more than others. In Scotland, Wales, and the East of England, residents are drinking 5 cups of tea per day, on average, which produces a staggering 71kgCO2e/Year. We also found that residents in London and the West Midlands drink an average of 4 cups of tea a day, thus producing approximately 56kgCO2e/Year.

Many of us are guilty of putting the kettle on and completely forgetting about it, but this can cost our environment dearly. We sought to find out how often this happens, in order to identify how much we are costing our planet.

Our research has found that the majority of Brits forget about boiling the kettle twice a day, which in a year increases the amount of CO2e drastically. In fact, when calculating how much CO2e is released after adding the two extra kettle boils to each area, it results in a whopping 934 kgCO2e/Year. This is the equivalent to more than three train trips from London to Edinburgh! 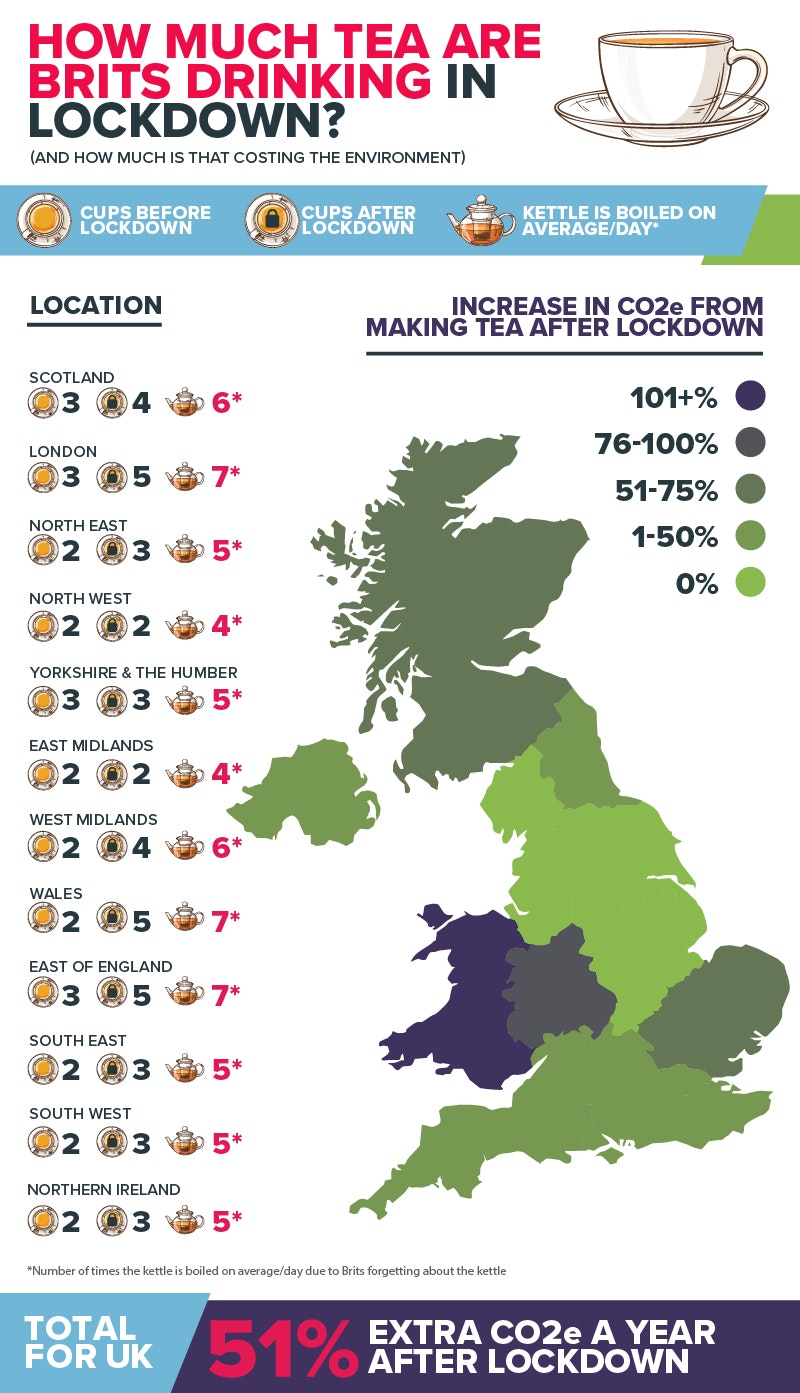 Which tea do Brits enjoy the most?

To find out more about the drinking habits of Brits, we also asked what assortment of tea they prefer the most. Perhaps to no surprise, English Breakfast tea (with milk) comes on top with almost half of Brits saying this is their first choice when brewing a cuppa (47%). Herbal tea comes next in second place, with a quarter of Brits enjoying the healthy benefits (24%).

On the other hand, fruit tea and green tea is not as popular among Brits, with only 7% and 9% saying it is their go-to daily tea, respectively.

What are the UK’s favourite types of tea?

Which UK cities love tea the most?

While tea is probably the one of the most popular drinks in the UK, we wanted to find out which cities love tea the most. We asked Brits “do you drink tea on a daily basis?”, to identify which cities have a cuppa most frequently.

We can reveal that the top 5 most tea-loving cities in the UK are as follows:

More on CO2: Does online steaming harm the environment?

*CO2e, or carbon dioxide equivalent, is a standard unit for measuring carbon footprints.

*Data is based on the electricity used by the average kettle in the UK, which takes approximately 3 minutes to boil.