Which fashion brands are the most complained about on Twitter?

Customer service - superb or subpar - can seriously affect a consumer’s shopping experience, and impact customer satisfaction and customer loyalty. There is so much choice in the fashion industry which means brands must compete to provide the best retail customer experience.

To find out which major fast-fashion UK brand has the most subpar customer service online, we conducted an in-depth sentiment analysis across 38,005 Tweets to determine which brand - including the likes of PLT, Boohoo, and Shein - is the most complained about on the popular social media platform, Twitter. 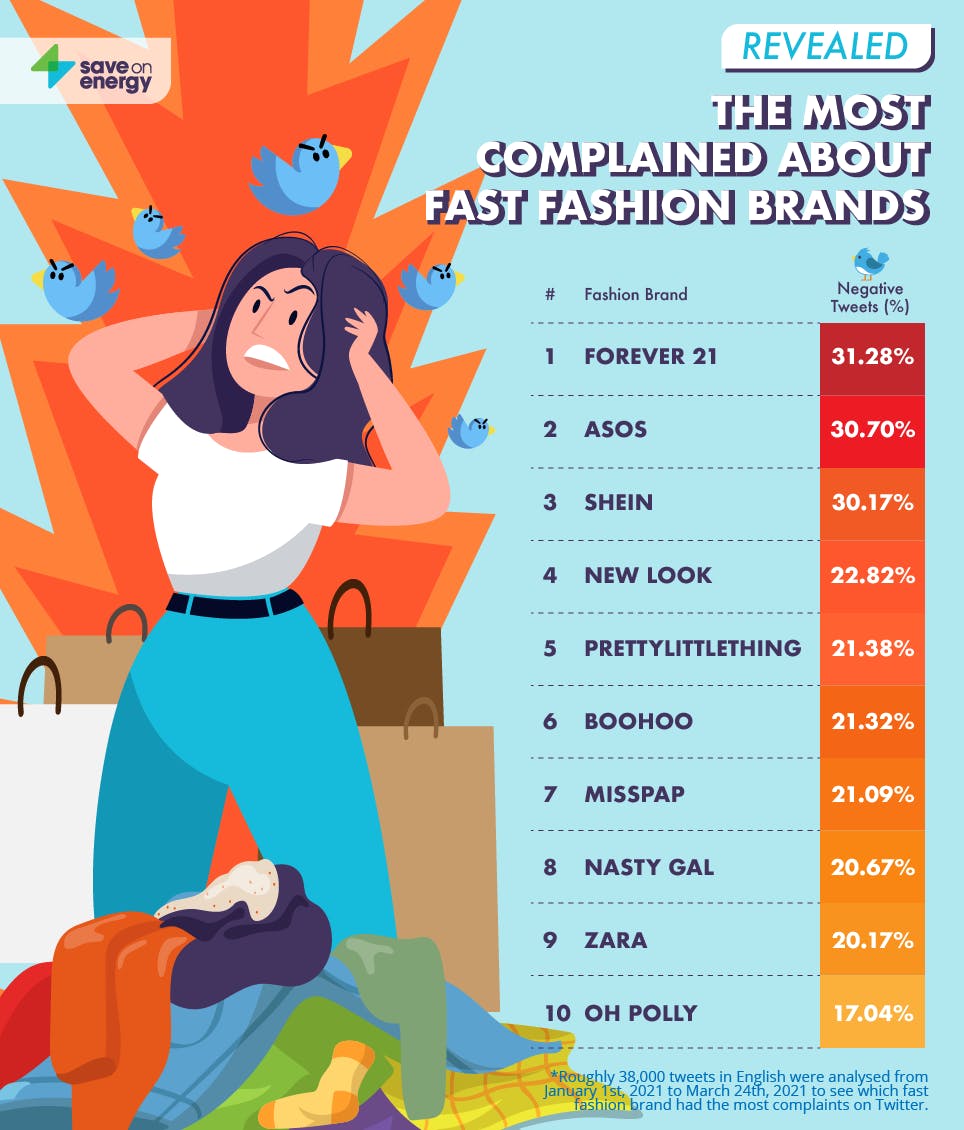 Of the 1,528 Tweets analysed in our sentiment analysis study, Forever 21 had the most negative Tweets aimed at the online fashion brand - almost one third (31.28%). Despite this, just over half (52%) of Tweets were found to be positive, and the remaining 17% were neutral. Some of the most negative Tweets on the popular social media app included hashtags like #boycottforever21, #fraudforever21, and #worstcustomerservice.

What’s more, our study also included an analysis of emojis in Tweets aimed at each major fast-fashion brand too. Consumers interacting with Forever 21’s customer service account, @Forever21Help, used the ‘loudly crying’ emoji (😭) the most - 24 times - followed by the ‘rolling eyes’ emoji (🙄) with 18 uses, and the ‘pray’ emoji (🙏) with 12 uses.

ASOS’ customer service team was found to be the second most complained about fast fashion brand in our study, with 30.70% of the 3,013 Tweets studied deemed negative in nature. Of the remaining Tweets, just under half (45%) were deemed positive, and a quarter neutral (24%).

Whilst analysing the range of Tweets to @ASOS_HeretoHelp, some of the most common hashtags used by consumers include #disappointed, #notcool, and #makeitmakesense, suggesting negativity towards the brand. Furthermore, the brand’s most popular emojis were the ‘loudly crying’ emoji (😭) used 71 times, the ‘tears of joy’ emoji (😂) used 63 times, and the ‘angry’ emoji (😡) used 36 times.

The third-most complained about fast-fashion brand on Twitter was found to be SheIn, with 30% of the 232 Tweets analysed having a negative sentiment, according to our analysis. From analysing these Tweets, some of the most popular hashtags used in conjunction with @SheIn_Help include #boycottshein and #sheinbanned. However, of the remaining Tweets, 48% were ‘positive’ and 22% were ‘negative’.

Analysis of emojis found the ‘angry’ emoji (😡) and the ‘love letter’ emoji (💌) had eight uses each, followed by the ‘thinking face’ emoji (🤔) with seven uses) were used the most, which predominantly suggest consumers are unsatisfied with the brand.

The fourth most complained about brand on Twitter is New Look, after our analysis of 3,024 of their Tweets found almost a quarter (23%) to be negative in nature. Among these Tweets, some of the most popular hashtags include #poorcustomerservice, #ripoff, and #shoddy. It’s not all bad, though, as despite this, almost two thirds (62%) of Tweets were deemed ‘positive’ and 15% ‘neutral’.

We analysed 3,040 Tweets interacting with the official Pretty Little Thing customer service account and found that 21% of these Tweets were deemed negative in nature. This ranks the fast-fashion brand as the fifth most complained about brand on the popular social media platform. Of the hashtags in the Tweets analysed, some of the most negative include #refund, #prettylittlefleas, and #poorcustomerservice.

Of the Tweets analysed relating to the official Pretty Little Thing customer service account, consumers use the ‘loudly crying’ emoji the most of all (😭) - 56 times in total. Following behind is the ‘tears of joy’ emoji (😂) with 49 uses, and the ‘sparkle’ emoji (✨) with 30 uses.

In our study, we conducted a thorough Twitter sentiment analysis across all major fast-fashion UK brands, to determine the brand with the most complaints cited. From this, we were able to uncover the brands with the most positive and negative Tweets. The full results are as follows: 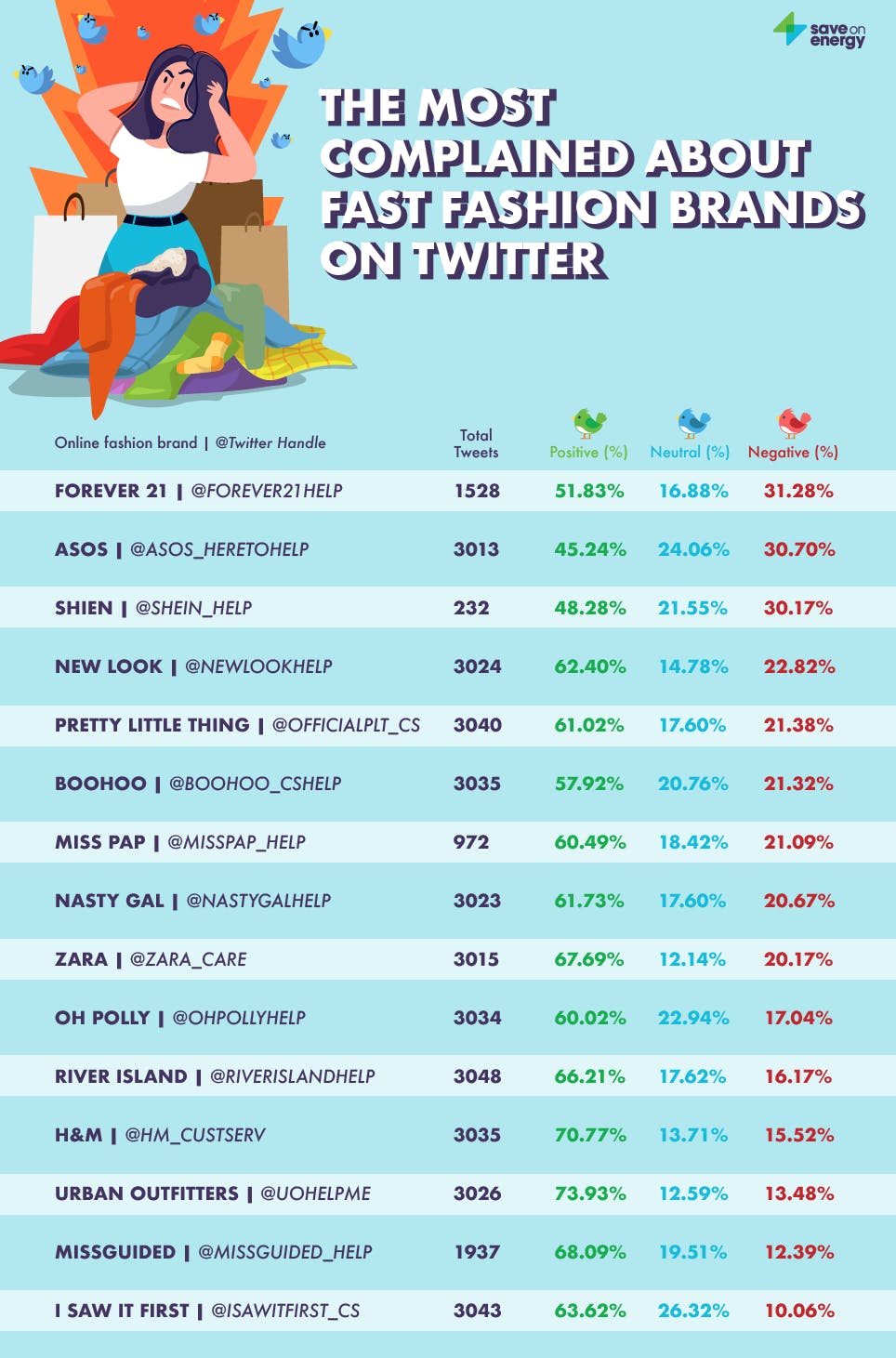 From these results, we can see that Urban Outfitters has the most positive Tweets overall, with 74% of their 3,026 Tweets found to have a positive sentiment. Following closely behind is H&M with 71% of the 3,035 consumer Tweets analysed to their customer service account deemed positive in nature, and Missguided with 68% of the 1,937 Tweets identified as being positive.

The most popular emojis used in Tweets to fast fashion brands

To further determine how Brits feel about the major fast-fashion brands, we analysed the most common emojis used among Tweets to each brand’s customer service account.

Our analysis found the most popular emoji used across each of the major fast-fashion brands in our study is the ‘loudly crying’ emoji (😭), which had a total of 437 uses across the 38,005 Tweets we analysed. In second is the ‘tears of joy’ emoji (😂), which was used 257 times across the Tweets analysed in our study. 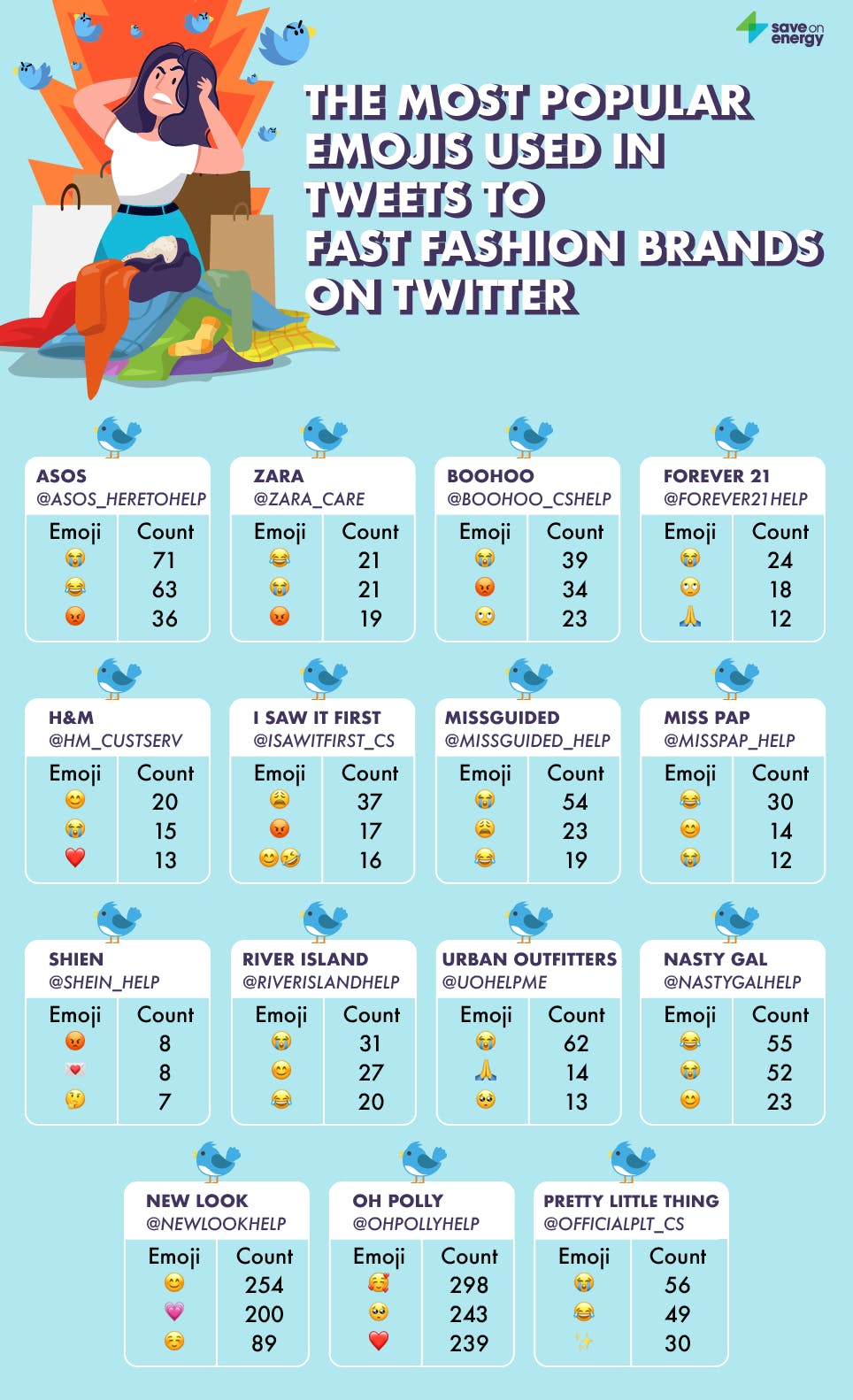 2. A collection of 38,005 Tweets mentioning each brand was analysed for positive, neutral, and negative words.