Which recycling signs baffle Brits the most? 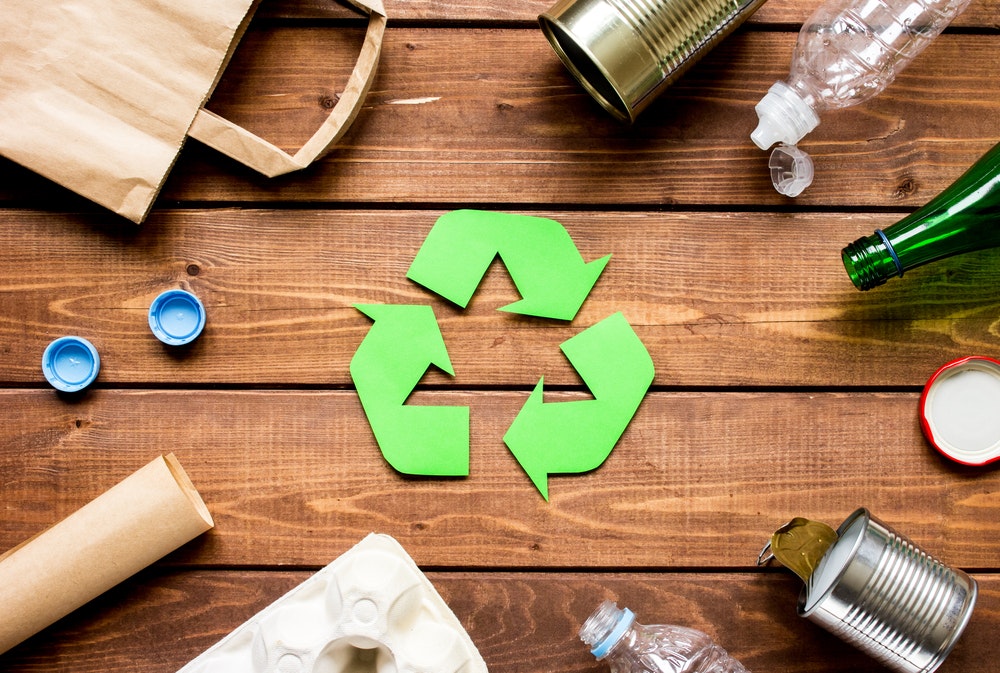 Recycling – we’re all in. But which bin?

With numerous symbols printed on household packaging, many of us are being left confused over what items are recyclable and what aren't. In fact, research conducted by YouGov found that only 8% of Brits strongly believe that recycling labelling on products is clear, which could be resulting in tonnes of recyclable material ending up on landfill every single year.

In a bid to find out which recycling symbols we understand the most and least, energy comparison site SaveOnEnergy.com conducted a nationwide survey of 2,300 Brits.

How many Brits can correctly identify recycling signs? 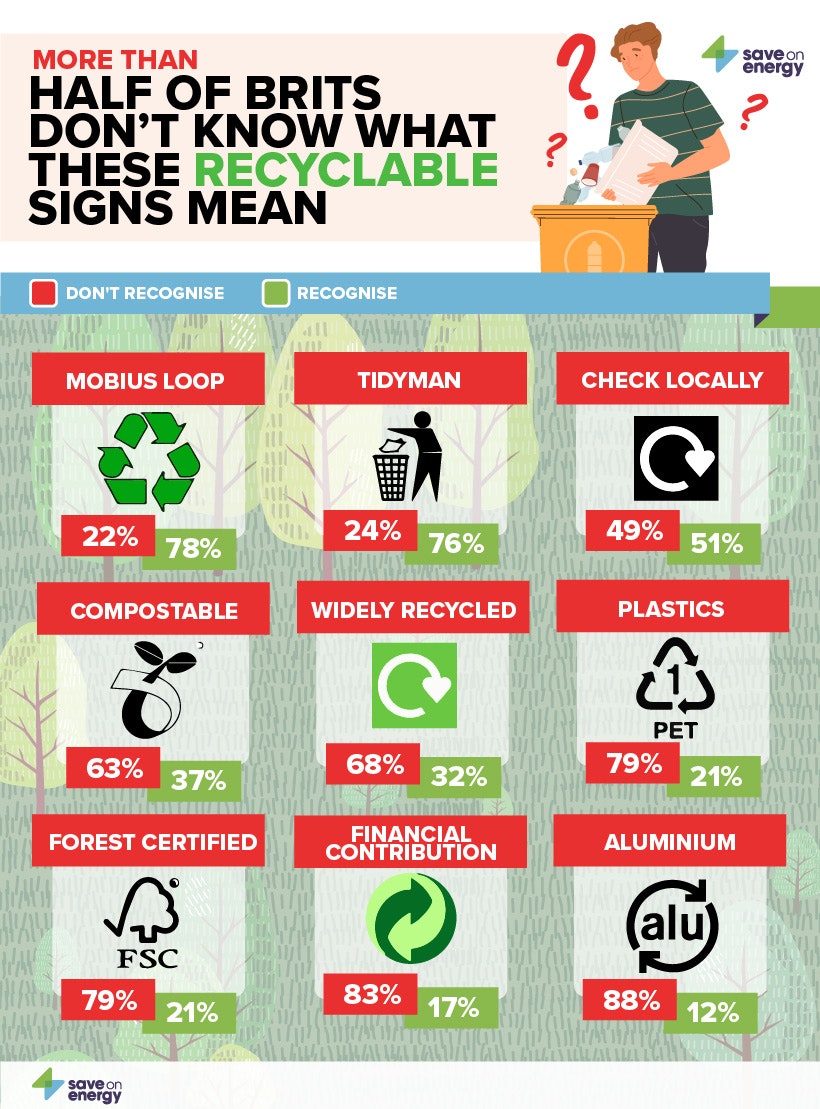 This symbol simply means that products are capable of being recycled, but it does not mean it has been recycled or that it will be accepted for recycling. Sometimes you may find this symbol with percentage in the middle, which explains how much of the product has been made from recycled materials.

According to our survey, more than three quarters (78%) understood what this symbol means, making it the most familiar recycling sign of all. However, almost a quarter (22%) still could not identify whether this sign meant that an item could be recycled, or not.

This symbol, showing a stick figure putting something in the bin, originates from the “Keep Britain Tidy” campaign which began back in 1960. It doesn’t have anything to do with recycling, but it serves as a reminder to dispose of your waste properly and recycle when necessary.

This is the second most familiar recycling sign to Brits, with three quarters (76%) correctly identifying what this symbol means.

This symbol means that this item is recycled by 20-75% of local authorities in the UK. If you see this recycling symbol on any products, be sure to check with your local council. To do this, simply write your postcode into Recycle Now’s Recycling Locator, which will tell you what you can put in your recycling bin at home, as well as what recycling facilities can be found near you.

Despite frequently being found on packaging in the UK, this symbol confuses half of Brits, with 49% failing to understand what it means.

This symbol means that the item is compostable. You must not put these items in your normal recycling bin as they cannot be recycled. Instead, place the items in with your garden waste bin. (If you don’t have one, ask your local council and they should be able to provide you with one!)

According to our survey, almost two thirds (63%) of Brits failed to recognise this recycling symbol, compared to just 37% who could.

This symbol, commonly found on the back of a product, means that the packaging is recycled by more than 75% of local authorities in the UK. It’s worth noting that there may be a few conditions to meet when it comes to recycling these items – for instance, you may be required to rinse the packaging out, or remove the sleeve or lid.

Despite being one of the most common recycling signs found on packaging, just a third (32%) of Brits surveyed understood what this recycling sign means.

This symbol aims to tell you what kind of plastic a product is made from, to help you understand how to recycle it by containing different numbers and letters. There are seven different plastic symbols, including:

1.       PET – short for Polyethylene Terephthalate. This is widely recycled.

2.       HDPE – short for High-Density Polyethylene. This is also widely recycled.

3.       PVC – short for Polyvinyl Chloride. This material is capable of being recycled but is harder to do so. Before placing in your recycling bin, check with your local authority whether it is a material they can recycle.

4.       LDPE – short for Low-Density Polyethylene. This is also capable of being recycled, but it’s a good idea to check with your local authority to check it can be recycled.

5.       PP – short for Polypropylene. This material is very hard or not possible to recycle, so where possible it is a good idea to reuse or avoid it. (This material can be found in tupperware, disposable cups, and some food containers).

6.       PS – short for Polystyrene or Styrofoam. This material is also hard or not possible to recycle, so try to reuse or avoid it where possible. (This material is used in disposable coffee cups, plastic cutlery and packing foam).

7.       Other – this is usually a mish mash of lots of different plastics, which means it is difficult to recycle.

Our survey found that a staggering eight in 10 Brits (79%) failed to recognise this recycling sign and whether it means that an item could be recycled, which comes as no surprise as a YouGov survey found that more than half of UK adults are clueless about plastic recycling.

This is highly concerning when considering that plastic pollution is one of the biggest threats to the planet today.

This symbol, which stands for Forest Stewardship Council, means that the product has been made from wood and sourced from a responsibly-managed forest that complies with the FSC’s guidelines.

Of all Brits surveyed, just 2 in 10 could identify what this recycling sign means and whether the products could be recycled, compared to eight in 10 who failed to recognise the sign.

This symbol means that manufacturers have made a financial contribution towards the recovery and recycling of packaging in Europe. Contrary to popular belief, this sign does not mean the packaging is recyclable, will be recycled, or has been recycled.

Even though this symbol is found on the majority of packaging, eight in 10 failed to successfully identify this recycling sign, making it one of the most common symbols that Brits fail to identify the most.

This symbol, containing the words ‘alu’ (aluminium), means that the product is created from recyclable aluminum – this may be a drinks can, deodorant can, or foil. However, it’s worth noting that when recycling aluminium foil, be sure to give it a rinse to remove any food residue or crumbs, as foil containing food can contaminate other items and prevent them from being recycled.

This symbol baffled Brits the most, with nine in 10 failing to correctly identify this recycling sign in our survey. 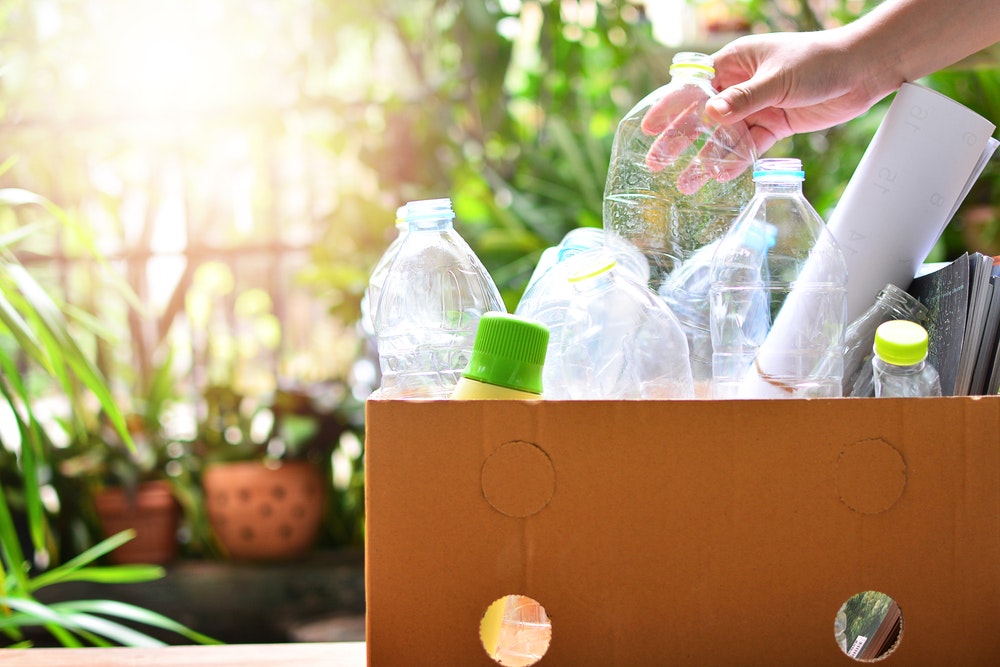 How much time do Brits waste working out what recycling symbols mean?

We also sought to investigate how long Brits spend trying to find out what each symbol means.

On average, if Brits were to look up recycling symbols and their correct meanings and instructions every time they needed to, they could spend up to 54.4 hours a year doing so – that’s equivalent to more than two days.

“It’s really fantastic how far we have come to help save the animals and our environment by minimalising the amount of plastic we use and waste. Although there is still a long way to go, symbols are put on items so consumers know what to do with them.

However, it seems they may be adding to the confusion – with this study showing more than half of Brits don’t know what most of the signs stand for. It would suggest we need to teach these symbols more widely in schools and workplaces for us all to live in a better and sustainable planet.”

You may also like: Top ten EU countries for recycling clothes and Wardrobe waste: what do you do with all your unworn clothes?

We then timed a number of participants to find out how long it would take them to:

a)      Look for the symbol and Google what the symbol meant before giving up (average of 41 seconds).

b)     Look for the symbol, Google what the sign meant but not find the answer and giving up (average of 1 minute, 43 seconds).

c)      Look for the symbol, Google what the sign meant and keep searching until they find the correct method of recycling (average of 2 minutes, 37 seconds).

We then used this to work out how much time was spent looking per item, per ‘big shop’.