What are the most searched for renewable energy stocks?

Alternative energy sources are well and truly on the rise, so it is unsurprising that searches for ‘renewable energy stock’ have spiked in recent years. As a result, the two main questions on everyone’s lips are: which renewable energy stocks are the most popular, and is now the best time to invest?

Interested in finding the most popular renewable energy stocks in the UK and around the world, energy comparison site SaveOnEnergy compiled a list of the fastest-growing energy stocks from multiple sources. We then used SEMrush to find the global and UK average monthly online search volumes for each company, before ranking them.*

The world’s most searched for renewable energy stocks 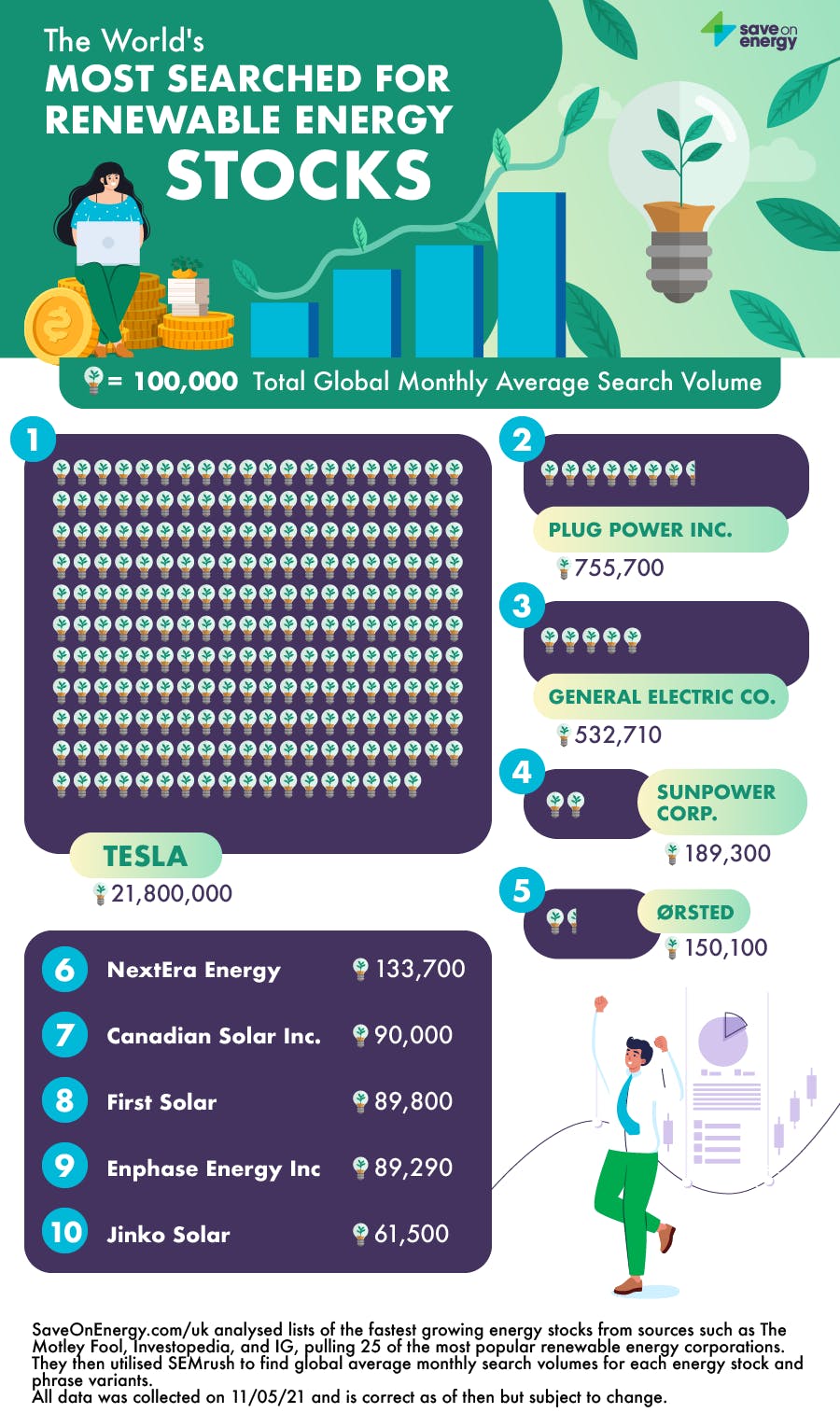 The renewable energy industry is growing faster than ever and it seems that people all around the world want to jump on this trend. When worldwide searches are taken into consideration, Tesla comes out on top with an average of 21,800,000 searches each month. The clean energy company that specialises in electric vehicles is perhaps largely known for its CEO, Elon Musk, who is a keen investor himself (albeit predominantly in cryptocurrency).

Plug Power Inc. comes next, in second place, but with substantially fewer global online searches. This American company is looking to replace conventional batteries with hydrogen fuel cell systems and managed to get people around the world to search 755,700 times (on average) for its stocks.

SunPower Corp. is looking to power the world by using solar energy, and 189,300 internet users around the world are interested in investing in this business. After announcing the intention to split into two companies, there are plenty of stocks to buy!

Ørsted, the biggest energy company in Denmark, is the first non-American entry. Having been ranked the world’s most sustainable energy company since 2019 by Corporate Knights Global 100 Index, it’s no wonder there are 150,100 average monthly searches looking to get in on the action.

In sixth and seventh place are NextEra Energy and Canadian Solar Inc. with 133,700 and 90,000 global monthly searches each, respectively. Both search amounts are over 99% lower than Tesla’s mammoth hold on the market.

Up next is First Solar, the third company that specialises in solar power on our list. On average, there are 89,800 average monthly searches globally for stocks in this American manufacturer of solar panels.

In the last two places are Enphase Energy Inc. and Jinko Solar with 89,290 and 61,500 average monthly searches respectively.

The most popular renewable energy stocks in the UK

Looking a bit closer to home, SaveOnEnergy was also interested in the most popular renewable energy stocks according to UK searches. However, the top three places remain unchanged with Tesla having 614,000 online searches for its stocks, Plug Power Inc. with 31,340 and General Electric Co. with 17,310.

Ørsted has managed to jump up a place and now sits in fourth with 13,220 average monthly online searches. NextEra Energy is also very popular in the UK as internet users search an average of 10,000 times in a month for information about the stocks.

SunPower Corp. and Enphase Energy Inc. both reel in a respectable number of searches with 6,550 and 4,560 monthly stock search volumes by UK residents. However, Enphase Energy has been dubbed one of the forerunners of solar power so we expect this number to increase exponentially.

The only unique entry on the list that did not make it to the top ten global searches is iShares Global Clean Energy. Those living in the UK searched an average of 4,400 times a month for this Exchange Traded Fund (ETF).

In sport nine and ten are two companies looking to harness energy from the sun, Canadian Solar Inc. and First Solar (and it seems like they’re onto a good thing with around 70% of sunlight being potentially useful). There were 3,650 and 3,200 average monthly searches for stocks in these companies.

Is now the right time to invest in renewable energy stocks? 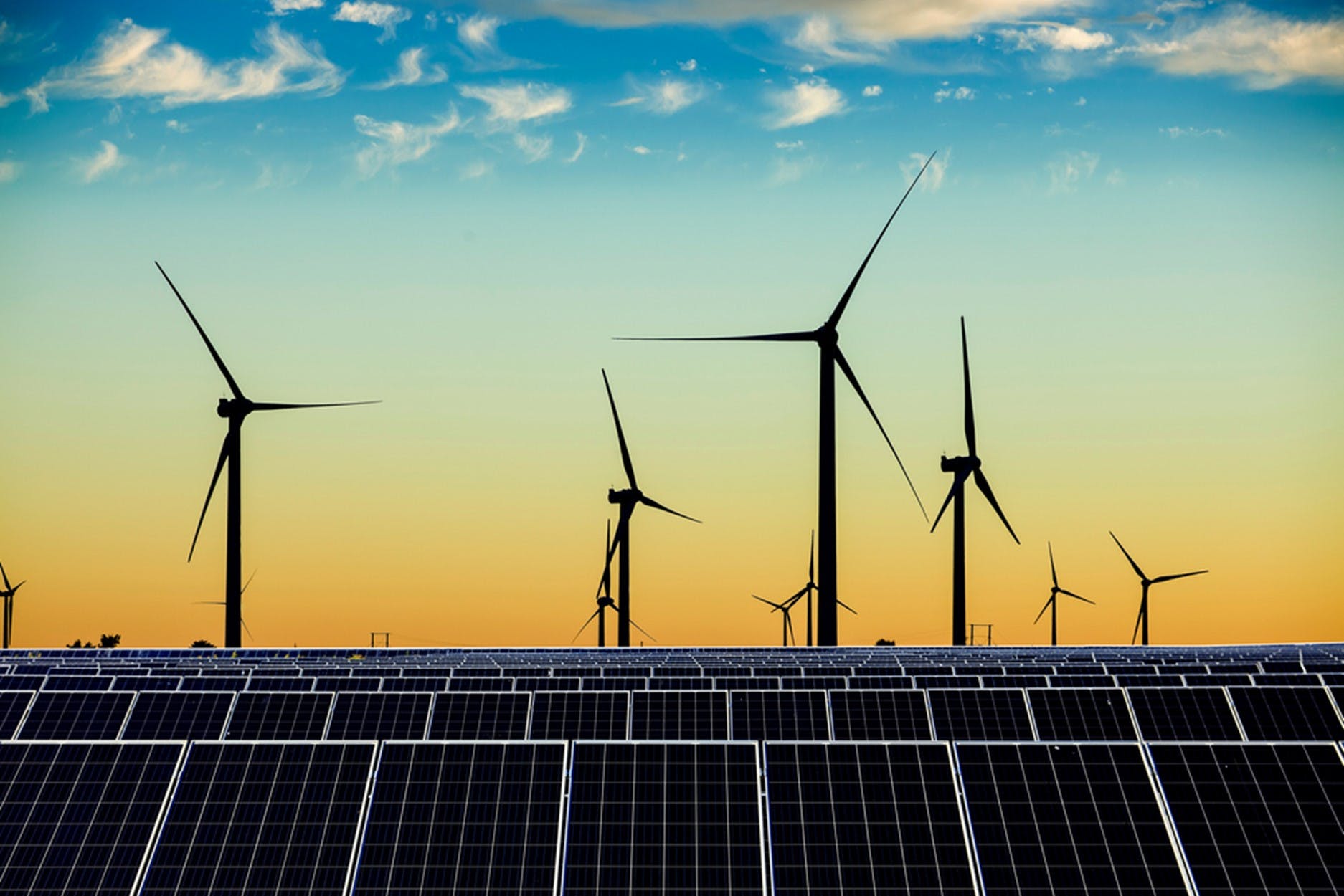 Investing in stocks can be a minefield, especially if you’re not too sure what you’re doing. That’s why many people turn to the internet to give them some all-important advice and information on where to put their money, and which stocks promise a good return.

With the projection that renewable energy sources will become more economic in the future, meaning that the cost to set up and build the equipment will be less than the profit, investing seems to be the way to go.

But should you buy stocks now or later? With pledges to cut carbon emissions and reach net zero being made around the world, more countries will likely adopt green energy solutions and so these renewable energy companies will be given a boost. Where a company thrives, the stock prices jump up too.

1. SaveOnEnergy.com/uk analysed lists of the fastest-growing energy stocks from sources such as The Motley Fool, Investopedia, and IG, pulling 25 of the most popular renewable energy corporations.

2. They then utilised SEMrush to find global and UK average monthly search volumes for each energy stock and phrase variants.