Delays can result in a lot of problems for drivers, with longer than expected journeys resulting in missed meetings, appointments, and angry spouses to name a few. What’s more, they also have a detrimental impact on the environment as when a vehicle is idle, it releases a substantial amount of CO2 into the atmosphere.

Interested in the impact of these delays, energy switching site SaveOnEnergy analysed the average delay per local authority in England in 2019 and how this impacted the CO2 produced per vehicle. We then ranked all regions in England to find out which region emits the most and least CO2 emissions from being stuck in traffic. 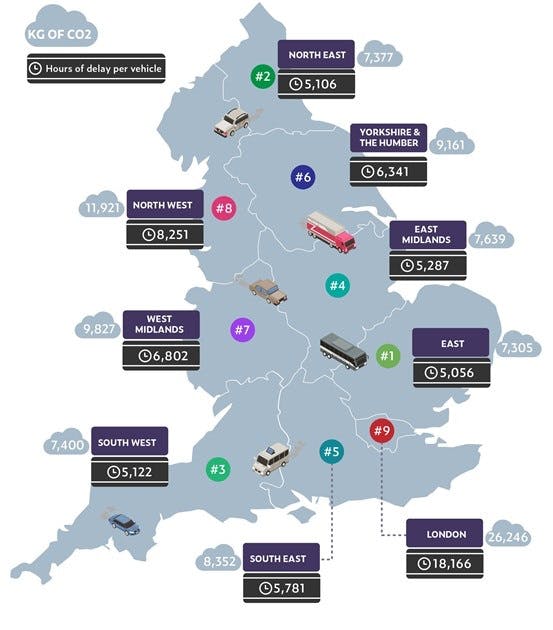 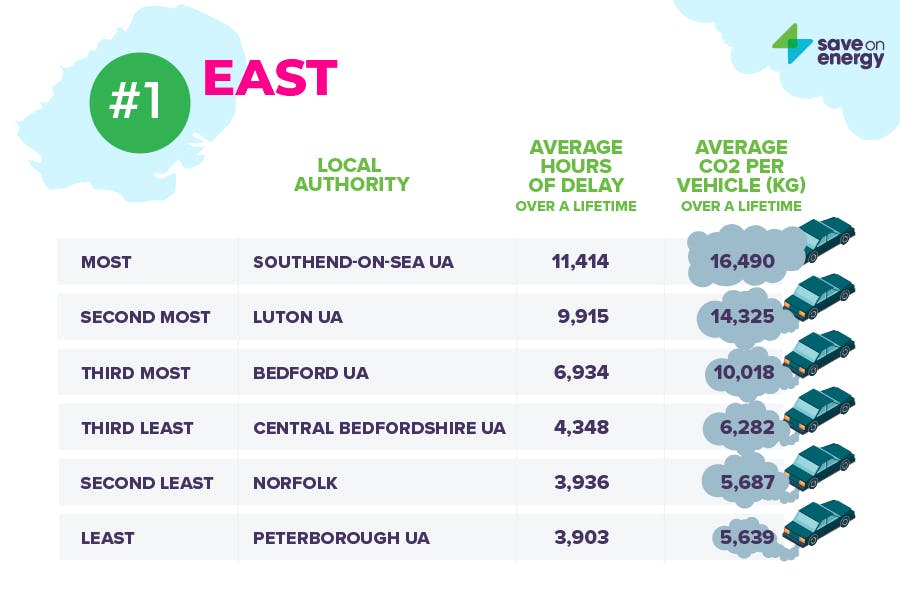 The least polluting region overall is the East of England. Our research found that each driver in the region, on average, spends 5,056 hours stuck in traffic in their lifetime, resulting in 7,190 kg of CO2 emissions being emitted per vehicle – the same as 1,455 return trips from London to Melbourne in Australia!

In the East of England as a whole, Peterborough pollutes the least amount of CO2 due to delays. Residents in the local authority spend 3,903 hours being delayed by traffic in their lifetime, and so are accountable for just 5,639 kg of CO2 per car. Norfolk follows closely behind producing 48 kg more CO2 from being stuck in traffic for just over one day more (33 hours).

On the other hand, drivers in Southend-on-Sea spend almost three times longer in traffic than residents in Peterborough (11,414 hours), which means that each vehicle produces 16,490 kg of CO2 whilst being sat idle! Luton and Bedford also rank among the worst in the region, emitting 14,325 kg and 10,018 kg of CO2, respectively. 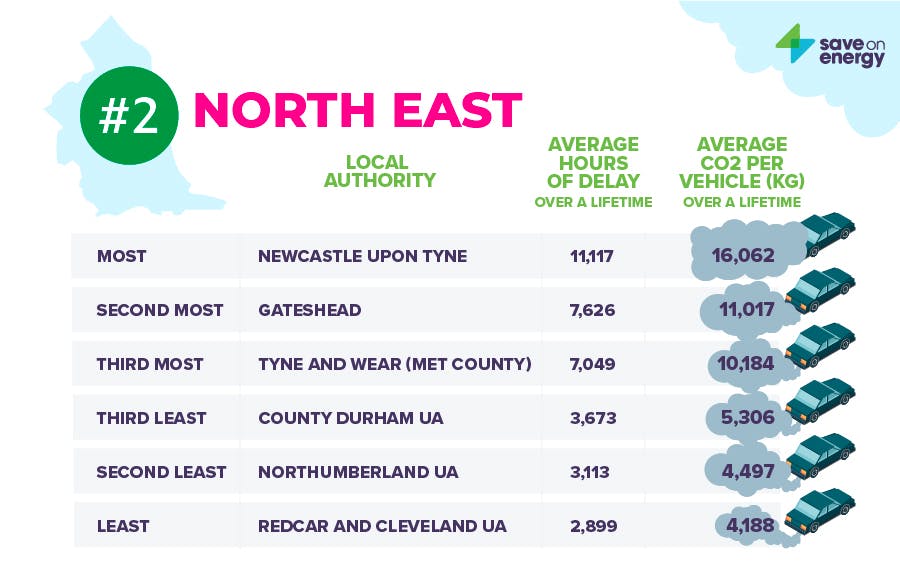 Just missing out on the top spot and coming in second place is the North East of England, as residents spend an average of 5,106 hours delayed in their cars over a lifetime, which results in 7,260 kg of CO2 being released per vehicle whilst sitting in traffic. To put that into perspective, that’s the same number of emissions as taking 1,469 trips from London to Melbourne, and back again!

When looking at individual local authorities in the region, Geordies are the worst offenders. Drivers in Newcastle upon Tyne spend 11,117 hours in traffic delay over a lifetime, leading to a whopping 16,062 kg of CO2 being emitted per vehicle, on average. Unsurprisingly, the neighbouring town of Gateshead also ranks poorly in the region, with residents spending more than 7,500 hours in traffic in their lifetime. This means that just over 11,000 kg of CO2 is produced per car, on average.

However, the best in this region is Redcar and Cleveland. Drivers are only inconvenienced by 2,899 hours of delay and so are responsible for just 4,188 kg of CO2 being released – that’s 11,874 kg less than Newcastle upon Tyne! Northumberland also ranks among the least polluting areas in the region, with drivers emitting just shy of 4,500 kg of CO2 from sitting in traffic, on average. 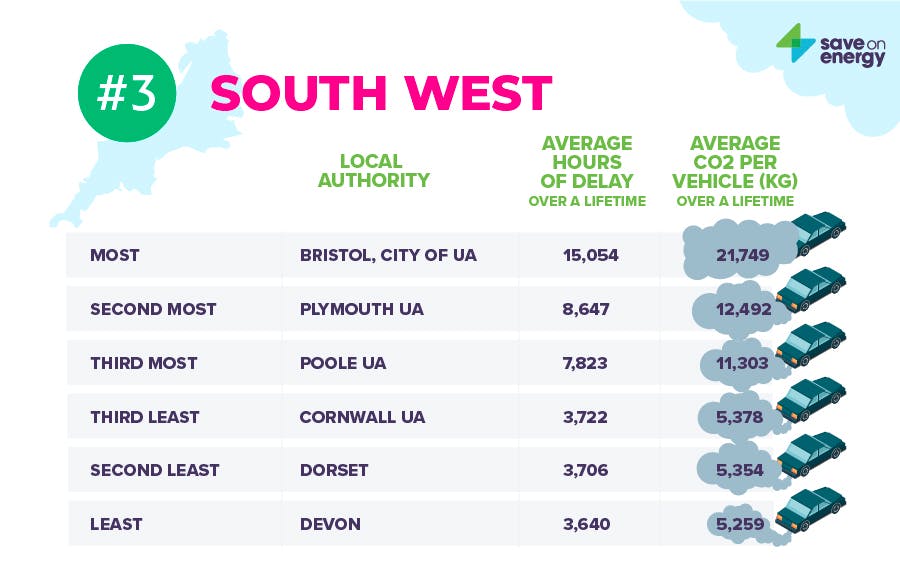 Third place goes to the South West of England. South Westerners spend an average of 5,122 hours in traffic in their lifetime, which pollutes an average of 7,283 kg of CO2 per vehicle. To put that into perspective, that’s the same amount of CO2 produced from taking 1,474 return flights from London to Melbourne!

According to our research, Bristol is the worst in the area for emitting CO2 from delays, with 21,749 kg being emitted per vehicle due to drivers sitting in traffic for 15,054 hours in their lifetime. Plymouth follows behind but drops substantially as drivers experience just 8,647 hours of delay during their lifetime, thus releasing 12,492 kg of CO2.

Devon is at the other end of the list, as drivers clock only 3,640 hours of delay in their lifetime. As a result, the local authority emits 5,259 kg of CO2 into the atmosphere per vehicle, on average – a whopping 16,490 kg less than Bristolians! 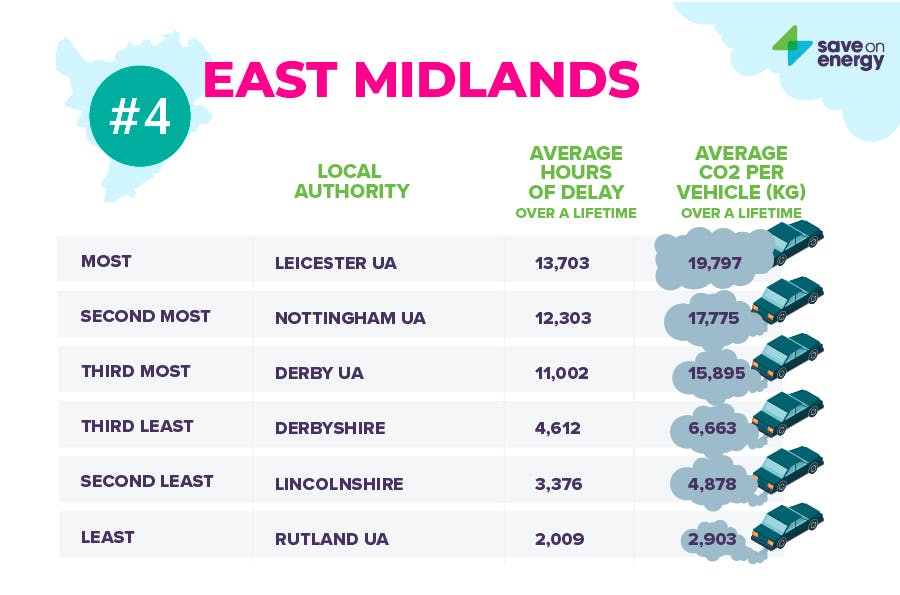 The East Midlands come in fourth as residents spend an average of 5,287 hours in their car sitting in traffic, thus racking up an average of 7,518 kg of CO2 per vehicle, which is the same as 1,521 return trips from London to Melbourne!

In the East Midlands, our research can reveal that drivers in Leicester are the worst culprits for emitting CO2 due to delays. Drivers, on average, spend 13,703 hours being delayed in their car in their lifetime, contributing to pollution by releasing 19,797 kg of CO2. Nottingham follows, emitting 17,775 kg of CO2 from spending 12,302 hours of their life idle in their cars.

On the other end of the scale, Rutland only releases 2,903 kg of CO2 from being delayed by an average of 2,009 hours – 16,894 kg less than Leicester and the least of all local authorities in England! Lincolnshire and Derbyshire don’t fare too badly either, with drivers from both local authorities producing 4,878 kg and 6,663 kg of CO2 from sitting in traffic, respectively.

You may also like: The Environmental Impact of Failed Driving Tests 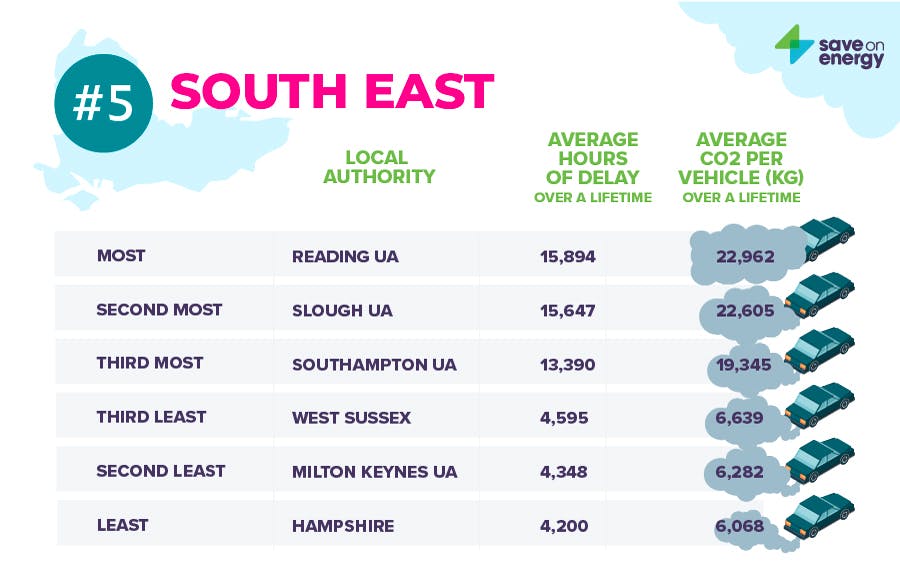 Coming in at number five is the South East of England. Drivers in the region can expect to sit in 5,781 hours of traffic in their lifetime which, according to our research, releases 8,220 kg of CO2 into the atmosphere per vehicle – the equivalent of taking 1,663 return trips from London to Melbourne! In the South East of England as a whole, Reading pollutes the least amount of CO2 due to delays. Drivers, on average, spend 15,894 hours in a delay of some kind in their lifetime, which results in 22,962 kg of CO2 being produced per vehicle. It’s not much better in Slough either, with vehicles releasing 22,605 kg of CO2, or Southampton at 19,345 kg of CO2 – some of the highest numbers in England. However, this number is more than halved when it comes to Hampshire as drivers spend just 4,200 hours in traffic. As a result, the area produces 6,068 kg of CO2, ranking the area as the least polluting in the South East. Despite being the largest town in Buckinghamshire, Milton Keynes follows behind after our research found that the area pollutes 6,282 kg of CO2 – just 215 kg more than Hampshire.

6. Yorkshire and the Humber 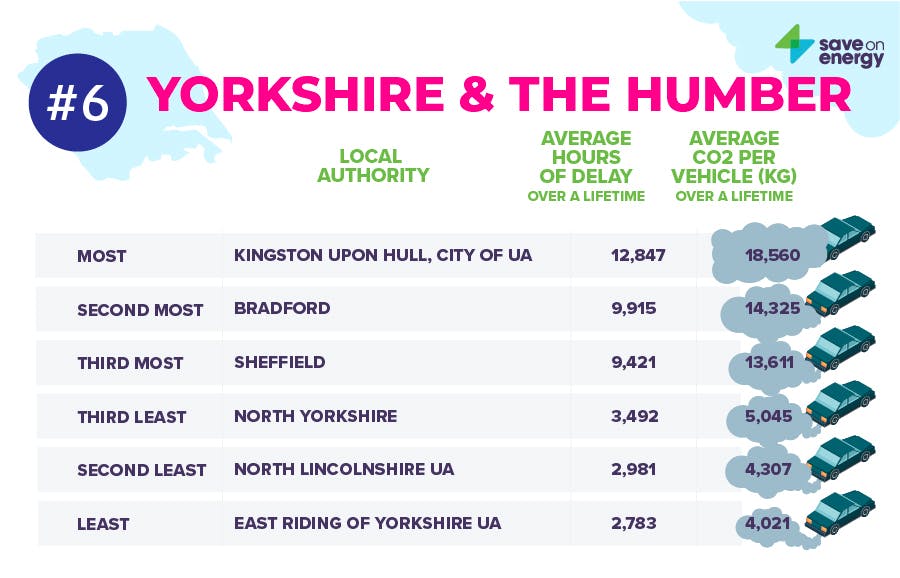 Coming next is Yorkshire and the Humber at number six on the list. Drivers in this region typically spend 6,341 hours in traffic in their lifetime, resulting in 9,016 kg of CO2 being released into the atmosphere per vehicle. To put that into perspective, taking 1,825 return trips from London to Melbourne produces the same number of emissions!

We can reveal that Kingston upon Hull is the highest contributor to CO2 emissions in the region due to delays. Drivers in the city spend around 12,847 hours delayed in their cars, on average, producing 18,500 kg of CO2 per vehicle. Closely following behind is Bradford, with cars emitting 14,325 kg of CO2 from delays.

With 2,783 hours of delay on average, East Riding of Yorkshire emits the least CO2 emissions in the whole of Yorkshire, contributing just 4,021 kg of CO2 per vehicle in the region as drivers spend just 2,783 hours in traffic in their lifetime – 10,064 hours less than the worst offender, Kingston upon Hull! 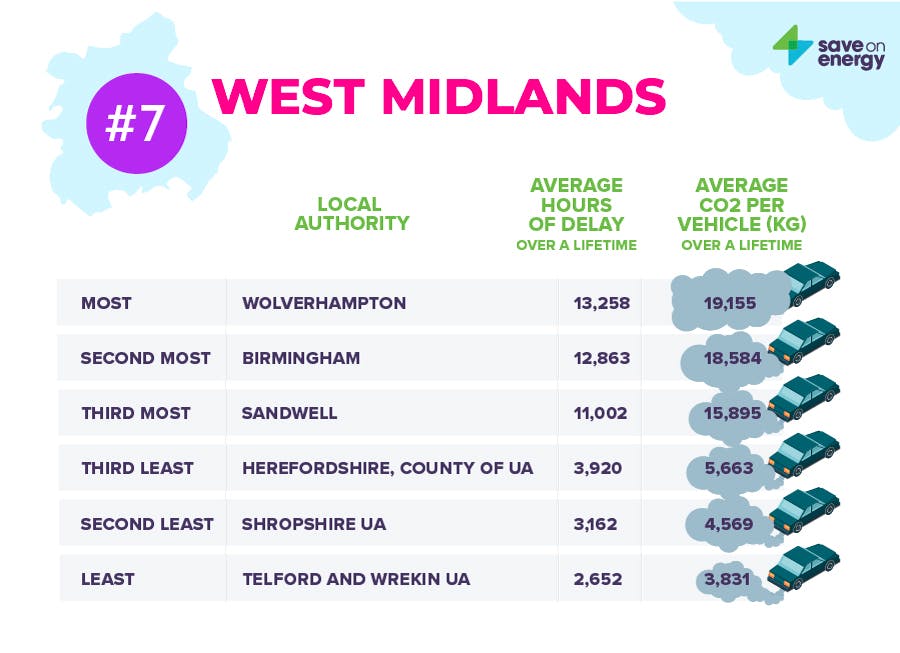 Coming in at number seven is the West Midlands. Drivers in this region spend an average of 6,802 hours delayed in their cars in their lifetime, which contributes 9,672 kg of CO2 per car, on average. The emissions caused by delays in this region are equivalent to taking 1,957 return trips from London to Melbourne!

Wolverhampton is the main offender in the West Midlands, after our research found that drivers spend more than 13,000 hours in traffic in their lifetime, resulting in 19,155 kg of CO2 being emitted on average per car – equivalent to the CO2 produced by using over 8,419 litres of petrol. Birmingham follows closely behind, emitting 18,584 kg of CO2 per vehicle based on the average Brummie driver being idle in traffic for 12,863 hours over their lifetime.

However, the areas in the region causing the least CO2 emissions from being delayed are Herefordshire (5,663 kg), Shropshire (4,569 kg), and Telford and Wrekin (3,831 kg) – some of the lowest levels in England. 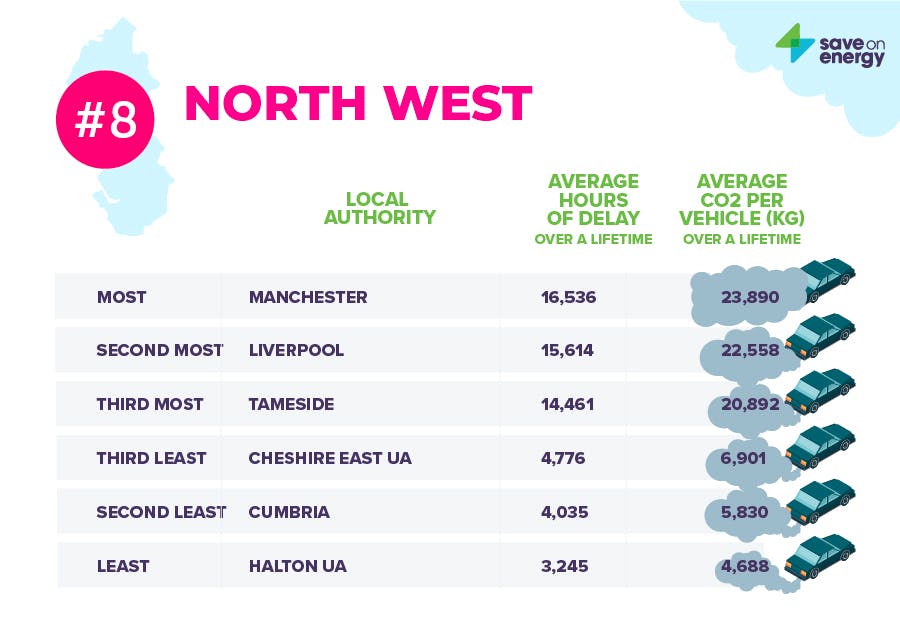 The North West ranks in eighth place, after our research found that the drivers in the region spend an average of 8,251 hours delayed in their cars, resulting in 11,733 kg of CO2 being emitted per vehicle. The same emissions caused by taking 2,375 return flights from London to Melbourne!

Boasting a population of over 2.7 million people, it’s no wonder Manchester emits the most CO2 from being delayed in this region. Mancunion drivers spend an average of 16,536 hours idle in a car as a result of delays, thus releasing 23,890 kg of CO2. This is the highest number of emissions when excluding the traffic-clogged capital, London. Liverpool follows with drivers releasing 22,558 kg of CO2 on average as drivers sit in 15,614 hours of traffic.

The area with the lowest emissions caused by delays is Halton, as only 4,688 kg CO2 is released from vehicles being delayed by an average of 3,245 hours. Although this number may seem small, it’s still the same as charging 588,434 smartphones! Cumbria also has one of the lowest CO2 emissions in region (and England as a whole), as drivers produce 5,830 kg of CO2 per vehicle due to delays.

You may also like: Where are the most eco-friendly high streets in the UK? 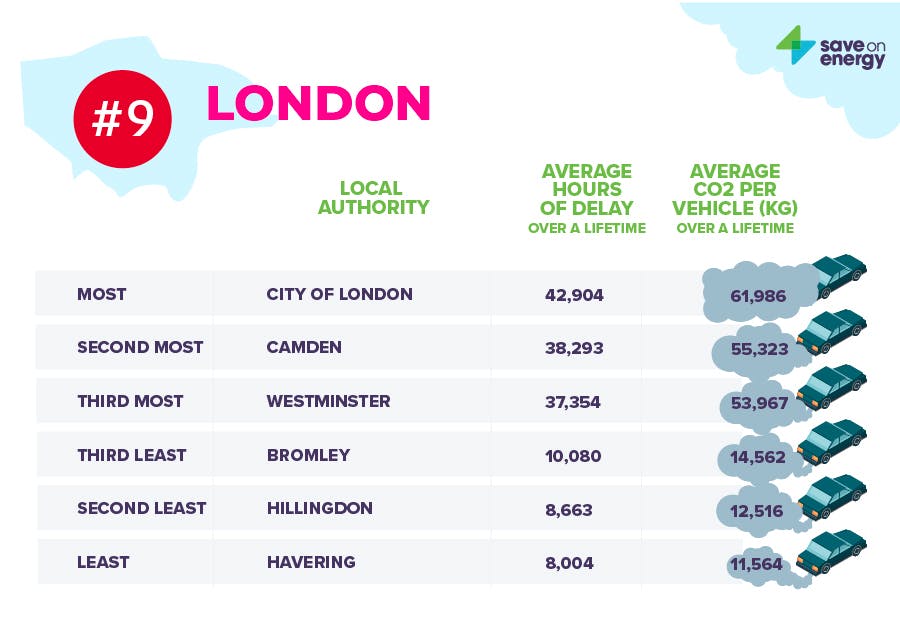 It shouldn’t come as a surprise that the capital is the worst culprit when it comes to CO2 emissions caused by delays when London residents emit the most CO2, and the capital contributes the most CO2 to fast fashion too.

Our research found that drivers in the region spend a whopping 18,166 hours in traffic in their lifetime, resulting in an average of 25,831 kg of CO2 being emitted in the region as a whole. To put that into perspective, that’s the same as taking 5,228 flights from London to Melbourne, and back again!

The worst local authority in the region is the City of London with drivers experiencing a staggering 42,904 hours of delay. This results in each vehicle producing 61,986 kg of CO2 emissions – the highest of all regions by a long mile. Camden comes next, in the region and in England overall, after our research found that drivers release 55,323 kg of CO2 on average due to spending 38,293 hours stuck in traffic over their lifetime.

On the other end of the scale, Havering is the local authority that comes in with the lowest amount of CO2 released during delays per vehicle (11,564 kg). Hillingdon and Bromley are not too bad either, emitting 12,516 kg and 14,562 kg of CO2 per vehicle, respectively.

What do we spend the most time doing in our cars?

In total, we spend 32,208 hours in our cars over a lifetime, driving around 592,920 miles on average. When taking into account the entire population of registered drivers in the UK, this means we produce around 4,440,862,302 tonnes of CO2 from driving in our cars! But what driving activities emit the most CO2? 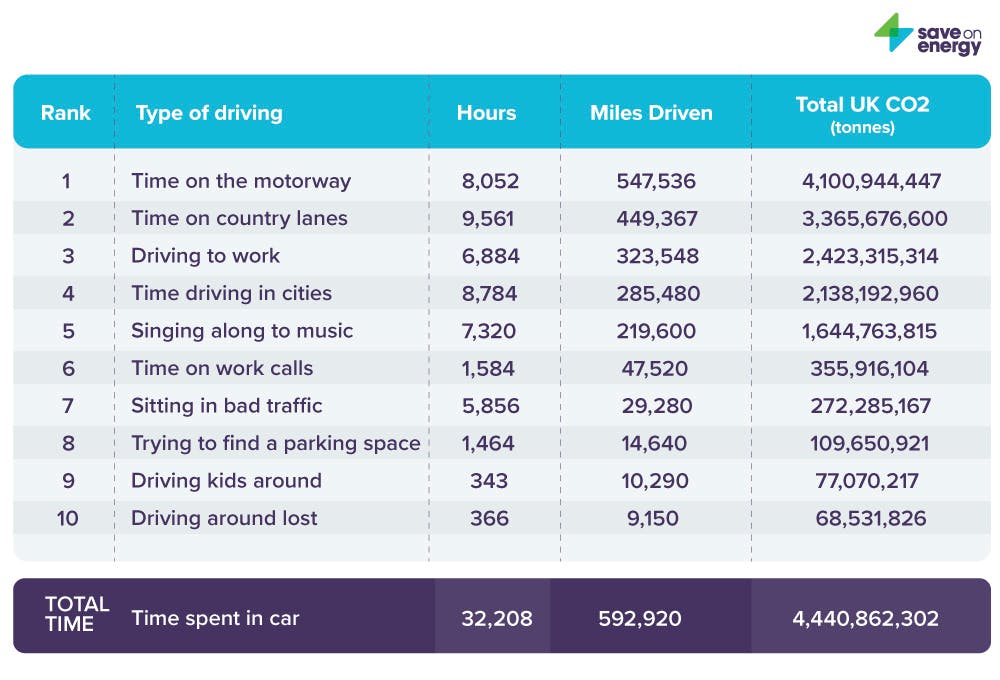 The most polluting activity is driving on the motorway. Typically, we spend an average of 8,052 hours driving on the motorway in our lifetime, which adds up to a whopping 4,100,944,447 tonnes of CO2 across the whole country. Driving on winding country lanes also emits a significant amount of CO2 into our atmosphere – more than 3 billion to be exact! We produce the least amount of CO2 when driving around lost (68,531,826 tonnes of CO2), which is predominantly due to the slower speed we drive at.

Time spent in our cars data: