The secret UK destinations that look like they're abroad

The UK’s ‘secret’ destinations that look like they're abroad 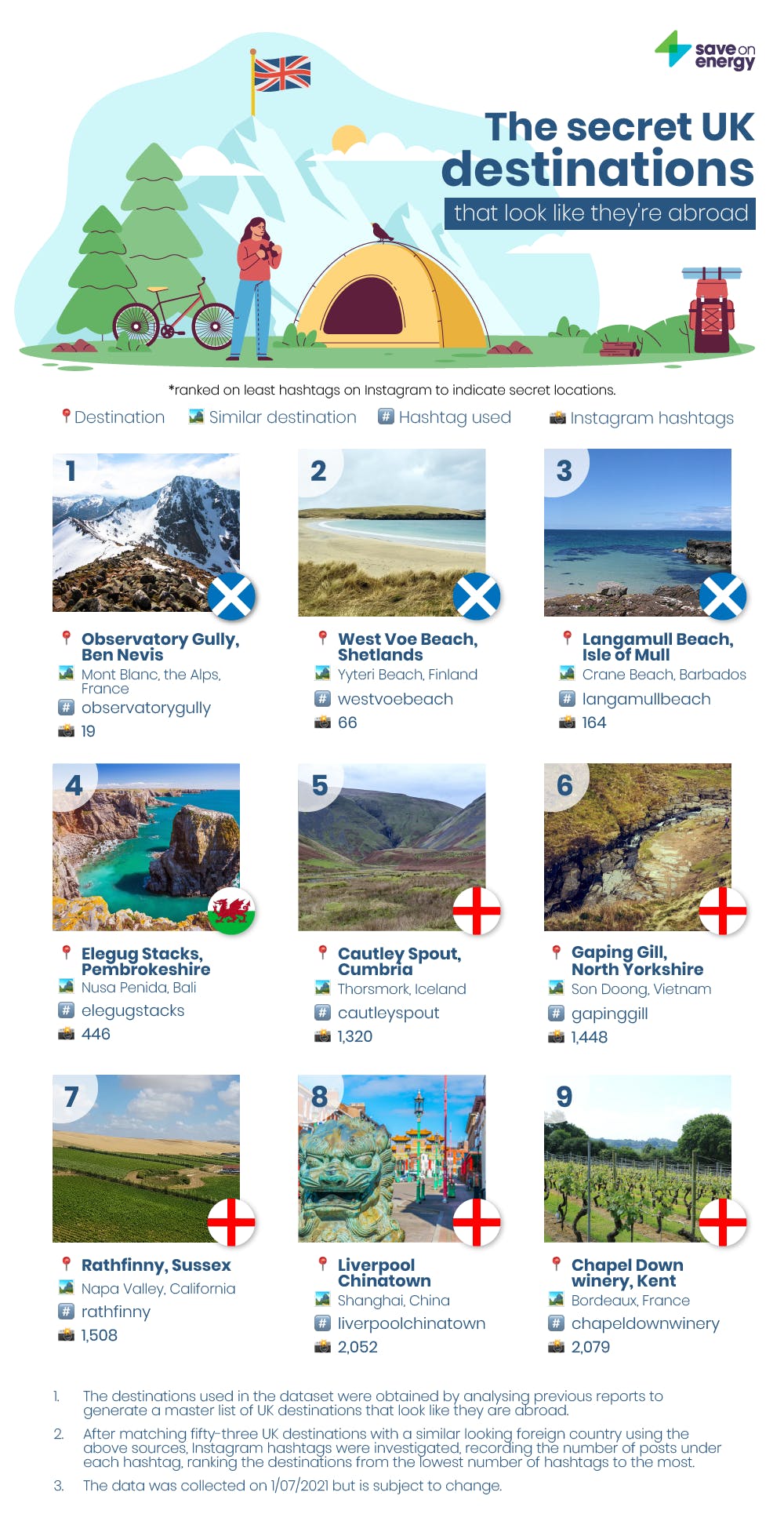 Observatory Gully on Ben Nevis is the United Kingdom’s most ‘secret’ destination that looks like it’s abroad, with just 19 hashtags of #observatorygully on Instagram. Ben Nevis, the UK’s highest mountain and Scotland’s highest peak, could easily be mistaken for the French Alps and is incredibly popular with skiers, climbers, and snowboarders alike.

Following behind in second is West Voe Beach, located in the Scottish Shetlands, with just 66 Instagram hashtags for #westvoebeach - just 47 more than Observatory Gully in first place. West Voe’s picture-perfect white sandy beach and steep dunes could easily be mistaken for Yyteri beach in Finland, but without the sub-three-hour plane journey.

The UK’s third most ‘secret’ destination that looks like it’s abroad is Langamull Beach on the Isle of Mull in Scotland, with 164 Instagram hashtags for #langamullbeach. The beach is home to stunning white sand and clear blue waters, akin to Crane Beach on the eastern Caribbean island of Barbados.

Elegug Stacks, situated on the west coast of Wales in Pembrokeshire, comes in fourth with the hashtag #elegugstacks racking up a grand total of 446 posts on Instagram. The majestic rocks can be found in the Pembrokeshire Coast National Park in Wales and share clear similarities to Nusa Penida in Bali - but minus 7,785 air miles*!

Rounding off the top five ‘secret’ UK destinations that look like they’re abroad, with 1,320 Instagram hashtags, is Cautley Spout in Cumbria. Located in the Howgill Fells on the edge of the Yorkshire Dales National Park, England’s highest waterfall boasts stunning views and magnificent walks resembling Thorsmork, an impressive mountain ridge in Iceland. 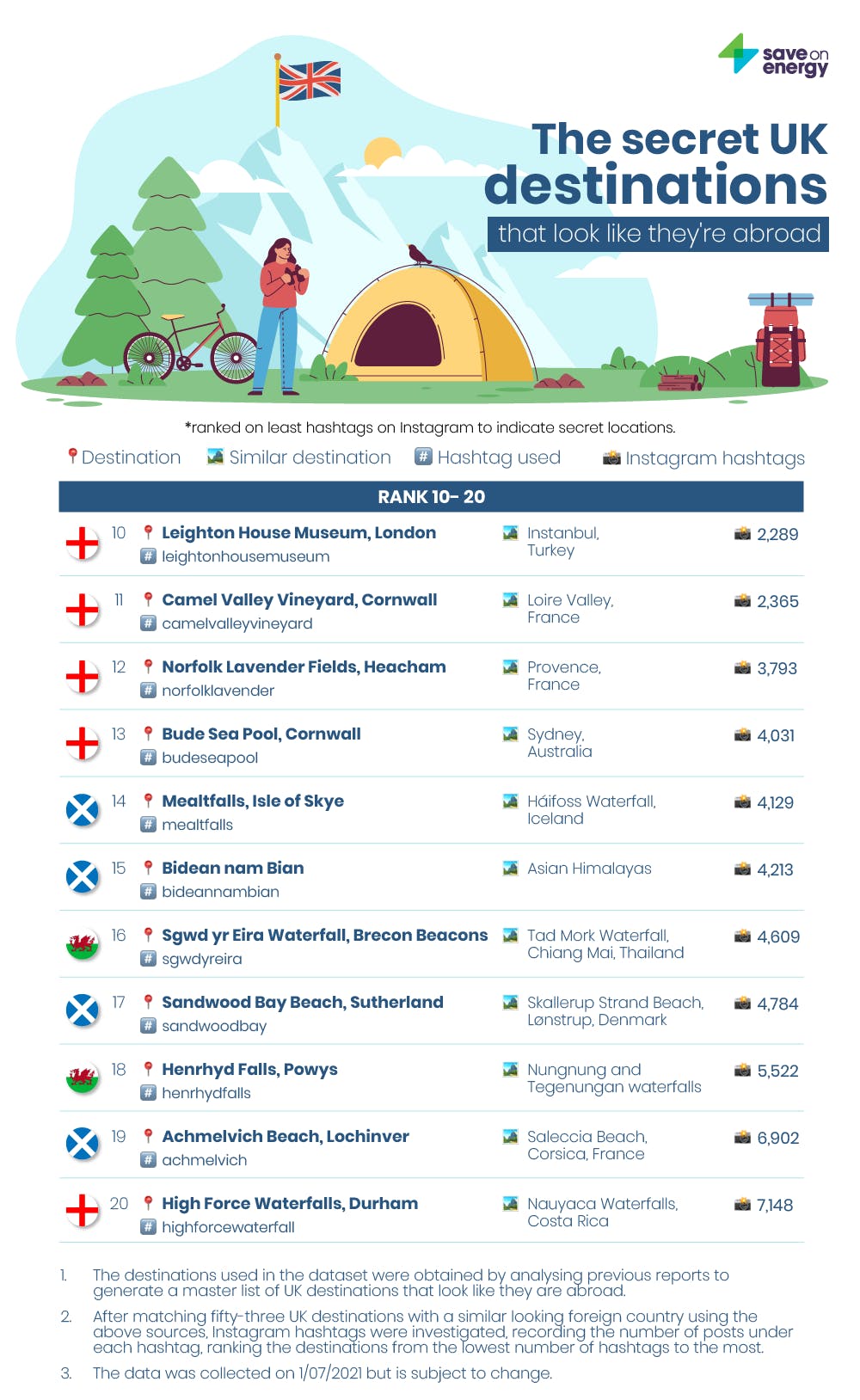 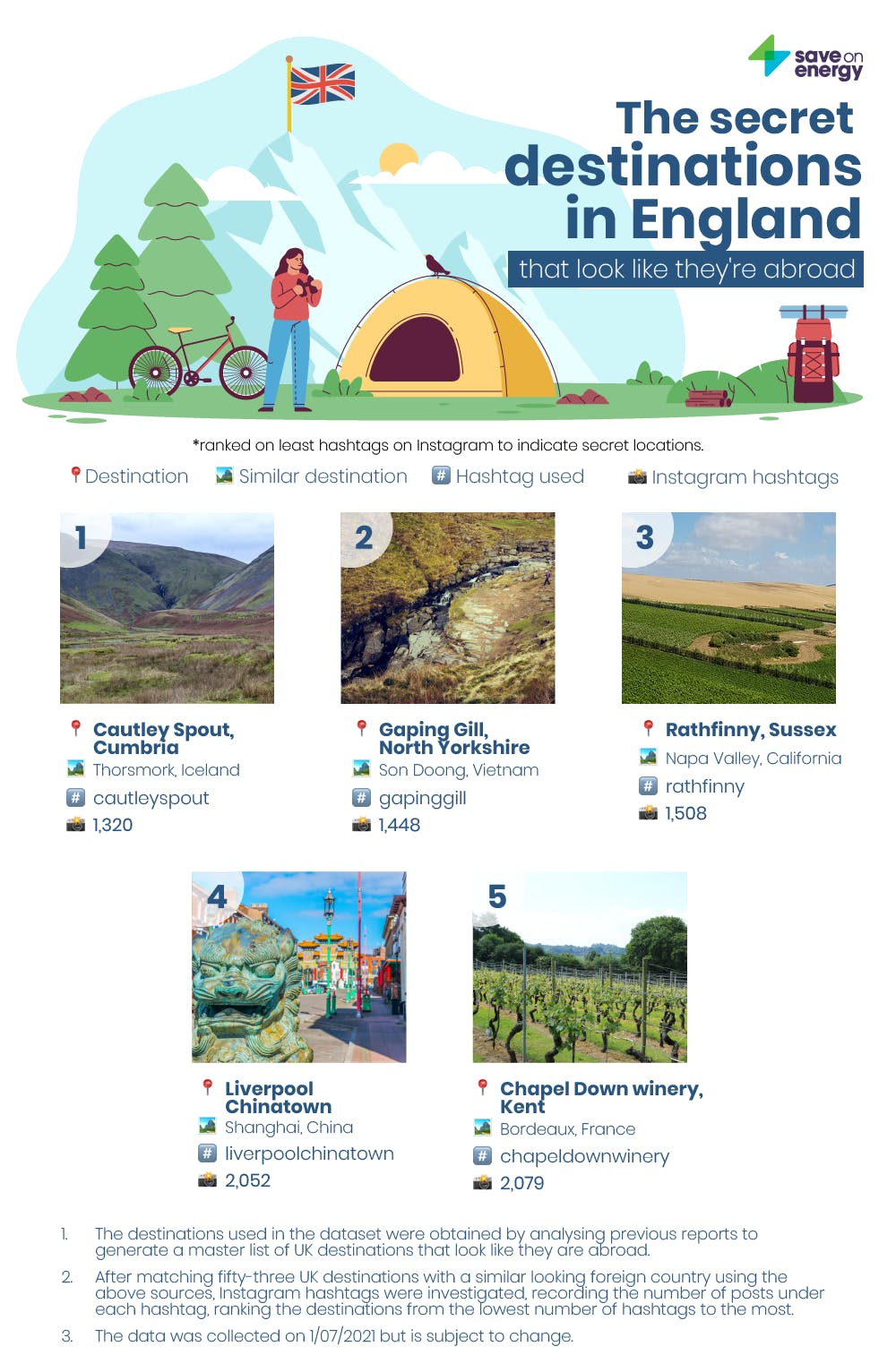 England’s most ‘secret’ destination that could be mistaken for abroad is Cautley Spout in Cumbria, with 1,320 posts for the hashtag #cautleyspout on Instagram. Located in the Howgill Fells on the edge of the Yorkshire Dales National Park, Cautley Spout is England’s highest waterfall sitting at 200m high. The water, which rolls off the cliff face into an Icelandic-style glacial valley, has notable similarities to Thorsmork, a mountain ridge in Iceland.

Gaping Gill is England’s second most ‘secret’ destination that looks like it’s abroad, with 1,448 hashtags on Instagram. The Northern Yorkshire landmark is one of the largest caves in the UK and is, in many ways, similar to Son Doong cave in Vietnam, the world’s largest cave that is so big that it can comfortably fit a Boeing 747 in its largest passage.

Rathfinny in Sussex is in third, with 1,508 posts under the hashtag #rathfinny on the popular photo-sharing app. Instead of heading 5,334 miles away to Napa Valley in California (an 11-hour trip), consider visiting Rathfinny for a tour and a taste of our very own home-grown wine. And whilst you’re there, you might want to drop by Beachy Head in East Sussex, which is among the top 10 highest rated coastal walks in the UK.

Fourth place goes to Chinatown in Liverpool, with 2,052 hashtags on Instagram (#liverpoolchinatown). With the oldest and largest Chinese community in the UK, Liverpool is stooped in history, and Chinatown is no exception. In fact, visiting Liverpool’s infamous Great George Street and seeing the traditional Chinese 13.5m high arch will instantly export you to Shanghai in China!

Another English vineyard rounds off the top five. Chapel Down Winery, based in Kent, has racked up 2,079 hashtags over the years and is the fifth most ‘secret’ destination in England that looks like it’s abroad. Next time you think of visiting Bordeaux in France for your wine fix, look a little closer to home as Kent is one of the top wine-producing regions in the world. 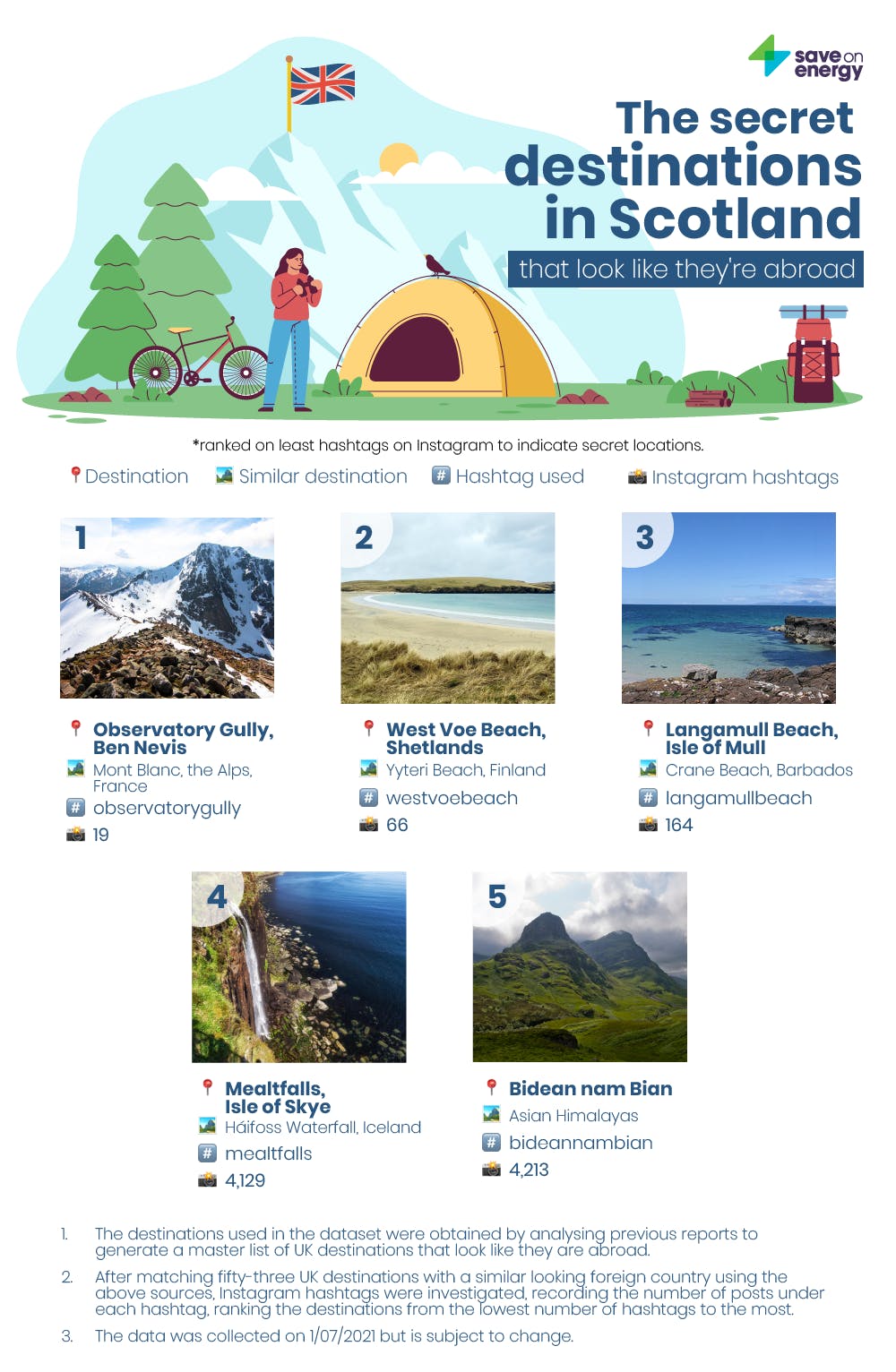 If you’re partial to a skiing holiday, trade in the busy French Alps for Scotland’s quieter Ben Nevis (Observatory Gully) instead, which has just 19 hashtags to its name on Instagram (#observatorygully). It is not unusual for Ben Nevis to have coverings of snow all year, so skiers, snowboarders and hikers will be in their element without having to go too far!

The white sand of West Voe beach in the Shetlands is surrounded by steep dunes covered in marram grass and looks out onto turquoise waters, so it’s unsurprising it is one of five spots to receive a Seaside Award from Keep Scotland Beautiful. The spot has only got 66 posts using the hashtag #westvoebeach on Instagram, making it among Scotland’s top five hidden gems that look like they’re abroad - in this case, Yyteri beach on Finland’s west coast.

Langamull beach on the Isle of Mull comes in third and is home to glistening white sand, hidden coves, and clear blue waters. This spot is comparable to Crane Beach on the eastern Caribbean island of Barbados, which has been voted one of the ‘Top 25 Sexiest Beaches in the World’ by The Travel Channel. Despite this, it's one of Scotland’s best-kept secrets as #langamullbeach has been used just 164 times on Instagram.

Mealt Falls on the Isle of Skye is Scotland’s fourth most ‘secret’ destination that looks like it’s abroad, with just 4,129 hashtags on Instagram (#mealtfalls). The stream of water drops off the cliff into stunning turquoise clear waters below, which on second glance, looks just like Háifoss Waterfall in Iceland. But instead of trekking 122m high to the top of Háifoss, reluctant hikers will be pleased to know that Scotland’s Mealt Falls requires minimal walking to reach the top and take in the beauty.

Take in the breathtaking views of the majestic range of Bidean Nam Bian mountains on the south side of Glen Coe draw stark similarities to the iconic grass-covered green peaks of the Himalayas. This breathtaking view is Scotland’s fifth most ‘secret’ destination that looks like it’s abroad, as it racks up just 4,213 hashtags in total on Instagram (#bideannambian). 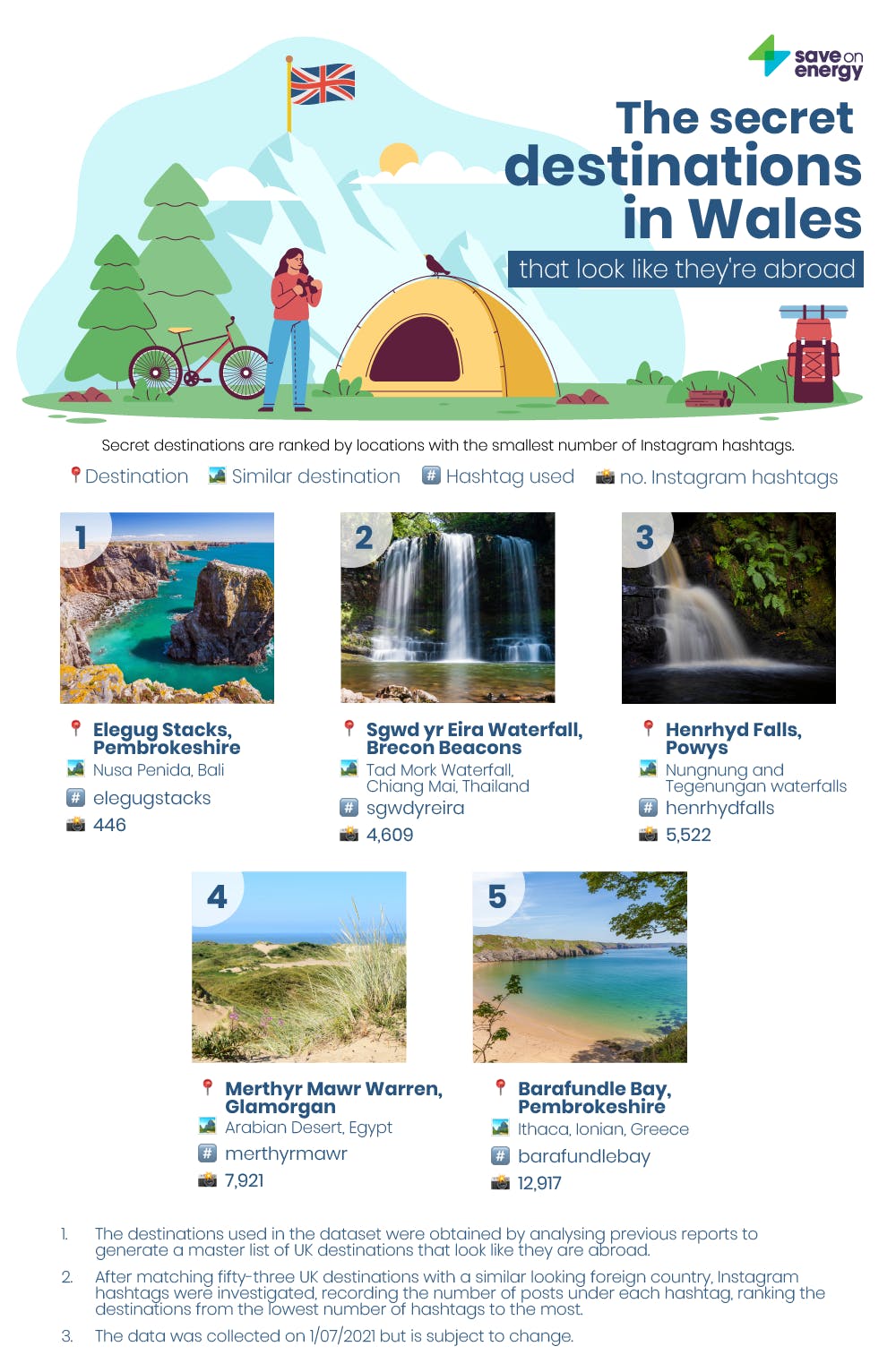 Pembrokeshire in western Wales is rated by National Geographic magazine as the second best coastline in the world, so it should come as no surprise that Elegug Stacks on the Pembrokeshire coast is Wales's most ‘secret’ destination that could be mistaken for abroad. The limestone pillars protruding out of the sea resembles the coastline on Nusa Penida in Bali. Nusa can get busy during peak season, so take the road less travelled and opt for Wales’s hidden treasure instead, with just 446 hashtags on Instagram (#elegugstacks).

Hidden in the Brecon Beacons is “waterfall country”, where you’ll be treated to various picturesque waterfalls - including Wales’s second hidden gem, Sgwd yr Eira, which has 4,609 hashtags on Instagram (#sgwdyreira). The rectangular drop mimics the same shape as the Tad Mork Waterfall in Chiang Mai, Thailand. With this beauty right on our doorsteps, why is there any need to board a plane to see the same sights in Thailand?

Tucked away on the western edge of the Brecon Beacons is the second waterfall among the top five, Henrhyd Falls. Despite looking very similar to the Insta-famous Nungnung and Tegenungan waterfalls on the Indonesian island, and featuring in the final scene of The Dark Knight Rises, the highest waterfall in South Wales is one of Wales’s ‘secret’ destinations with just 5,522 posts for the hashtag #henrhydfalls.

In fourth is Merthyr Mawr Warren on the South Welsh coast of Glamorgan, home to the highest dune in Wales known as the Big Dipper. The beach’s rolling sand could easily be mistaken for the Arabian desert in Egypt. In fact, it was as some of the desert scenes in the classic 1962 film Lawrence of Arabia were shot in Merthyr Mawr. Despite its film accolades, the location has only been hashtagged 7,921 on Instagram (#merthyrmawr), making it one of Wales’s secret gems.

The second Pembrokeshire mention and rounding of Wales’s top five ‘secret’ destinations is Barafundle Bay, with 12,917 hashtags for #barafundlebay on Instagram. From scenic walks along the cliffs to dramatic rock arches and rolling dunes, this stretch - which has been named one of the best in the world - is very similar to the Greek island of Ithaca, just off the northeast coast of Kefalonia.

Pembrokeshire is known for its beauty, so it comes as no surprise that Pembrokeshire National Park is the most popular European national park.

1. SaveOnEnergy.com/uk sought to determine the most ‘secret’ UK destinations that look like they are abroad on Instagram.

2. The destinations used in the dataset were obtained by analysing previous reports to generate a master list of UK destinations that look like they are abroad. Sources include Huffington Post, Time Out, CN Traveller, Mirror, The Guardian, Country Living and EasyVoyage.

3. After matching the UK destination with a similar-looking foreign country using the above sources, Instagram hashtags were investigated, recording the number of posts under each hashtag.

4. Fifty-three destinations around the UK were investigated using the above sources. #Shetland and #Kingslynn were removed from the study due to many tagged Instagram posts being unrelated to the topic.

5. After collecting the data from Instagram, the team were able to rank the UK destinations from the lowest number of hashtags to the most, thus creating a list of ‘secret’ destinations.