What is the ultimate plant growing playlist?

As the popularity of houseplants continues to increase, more and more people are choosing to become plant parents. Beyond putting them near a window so they have access to sunlight and the usual watering, how else can you make sure your plants are growing to their full potential? Well, according to Dr Dominique Hes from the University of Melbourne, plants enjoy the energy some music produces, and it can help them grow.

So, to identify the ultimate plant growing playlist, energy saving site SaveOnEnergy scraped Spotify data to uncover the most popular songs people are streaming to help their plants grow, as well as finding the most common music genre and artist.

The most popular songs on plant growing playlists 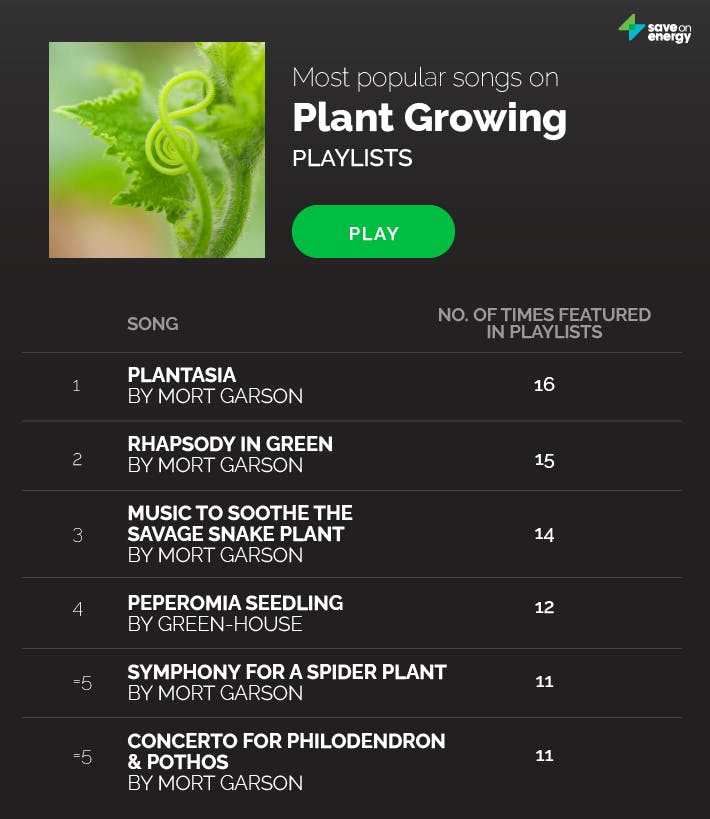 If you’re looking for your beloved houseplant to sprout new leaves or grow a few inches, you should put on Plantasia by Mort Garson. This song featured 16 times on plant growing playlists created on Spotify. This particular tune is from the electronic album Mother Earth's Plantasia which was specially created for plants to ‘listen’ to.

In second place is another entry from Mort Garson. The Canadian-born composer also created Rhapsody in Green, which is from the same album as Plantasia, and was featured on 15 playlists overall – missing out on the top spot by just one.

Believe it or not, number three is another song by Mort Garson. It seems that this specially made plant growing album does exactly what it says on the tin. Music to Soothe the Savage Snake Plant (1976) is the first entry that seeks to help a specific plant grow, and features on 14 playlists.

Found on 12 Spotify playlists, Peperomia Seedling by Green-House comes in fourth and is the only entry in the top five by a composer other than Mort Garson. The song, described as “featherlight and beautiful”, it is the project of LA-based Olive Ardizoni and promises to invigorate your houseplants.

Lastly, in joint fifth place is Symphony for a Spider Plant and Concerto for Philodendron & Pothos, both by Mort Garson. These two songs are found on 11 playlists each and make up two songs on the 10-part Mother Earth's Plantasia album.

You may also like: How many houseplants can offset CO2 produced from charging smartphones?

The most common artists on plant growing playlists 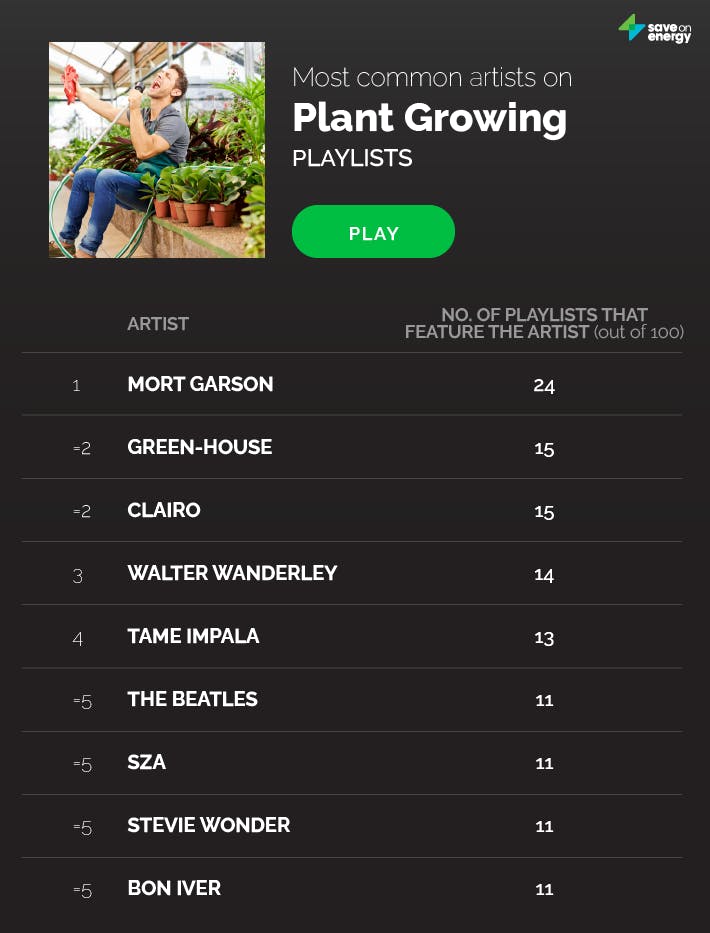 It should come as no surprise that Mort Garson sits firmly at the top of this list. Out of the 100 playlists we studied on Spotify, this artist featured on 24 – almost a quarter of playlists! Often being branded unique and even bizarre, Garson has truly found fans in plant-lovers.

Green-House and Clairo tie in second place, with both featuring on 15 playlists each. Popular with the indie crowd, Clairo has amassed over 73 million views on her video for the song Pretty Girl, but she has also found her niche in plant growing.

The late Brazilian organist and pianist, Walter Wanderly, specialised in laid-back lounge music and was perhaps best known for an instrumental version of Summer Samba. It seems these calm tunes are also perfect for plant-growing, as his songs feature on 14 plant growing playlists on Spotify.

Psychedelic music artist, Tame Impala, is in fourth place. Whilst you may not immediately pair their songs with the serenity needed for your plants to grow, they feature in 13 playlists. Lastly, in joint fifth place are The Beatles, SZA, Stevie Wonder, and Bon Iver. These four artists, each coming from different music genres, feature on 11 playlists and are perhaps the most well-known entrants on this list.

The most popular genres on plant growing playlists 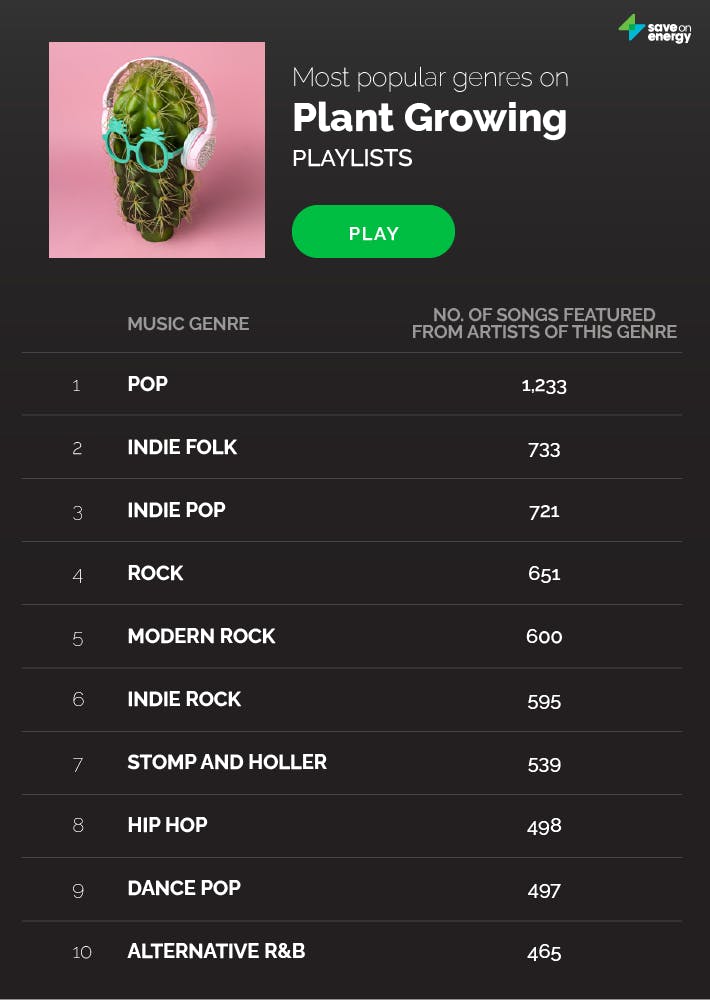 If you’re looking for a specific genre for your plants to vibe with, look no further. The number one genre you should be turning to if your houseplants need a little TLC is Pop music. According to our research, there were 1,233 songs of this genre featured on plant growing playlists.

Up next is Indie Folk and Indie Pop in places two and three, with 733 and 721 songs in the studied playlists, respectively. Spots four, five, and six all are related to rock music. Rock (651 appearances), Modern Rock (600), and Indie Rock (595) all seem to be popular choices when creating the ultimate plant growing playlist.

The next two entries of Stomp and Holler and Hip Hop are quite surprising. When you imagine music perfect for plants, you may think of relaxing sounds that are not exactly synonymous with these two genres. However, with 539 and 498 songs from these genres featured on playlists for plants, it may be just what they need to flourish.

Rounding off the top 10 is Alternative R&B, with 465 songs from this genre, it seems playing hits by Alicia Keys or Tina Turner are great choices if you want to further care for your greenery.

Taking into account the most popular songs, artists, and genres on the studied playlists, we were able to identify the public’s perfect plant growing song. We can reveal that the ideal tune for your plants has a tempo of 114 BPM, lasts exactly 4 minutes, and is Pop.

This conclusion was reached by finding the averages of all songs analysed and, although it has not been scientifically proven (yet!), these features seem to be the most favoured by the public on Spotify when caring for their plants.