Which European countries are doing the most to reduce end-of-life vehicle disposal?

As the 2030 deadline for the ban of petrol and diesel car sales draws closer, the question of what to do with retired cars keeps cropping up. It is suggested that in 2018, 6.1 million cars were scrapped across Europe and without intervention this number could continue to rise, hitting an all-time high in 2030 when a flurry of cars could be ready for retirement. The End-of-Life Vehicles Directive is a legal act of the European Union, drawn up to tackle this issue directly. You’ll be pleased to know cars are a great source of recycling - this can either mean reusing parts for repairs or used to produce energy. But are we doing the most to reduce disposal when it comes to these end-of-life vehicles (ELV)? To find out which countries do the most and least to reduce end-of-life vehicle disposal, energy switching website SaveOnEnergy analysed data from Eurostat to uncover which European countries are doing the most, and least, to reduce end-of-life vehicle disposal.

Which countries are doing the most to reduce end-of-life vehicle disposal? 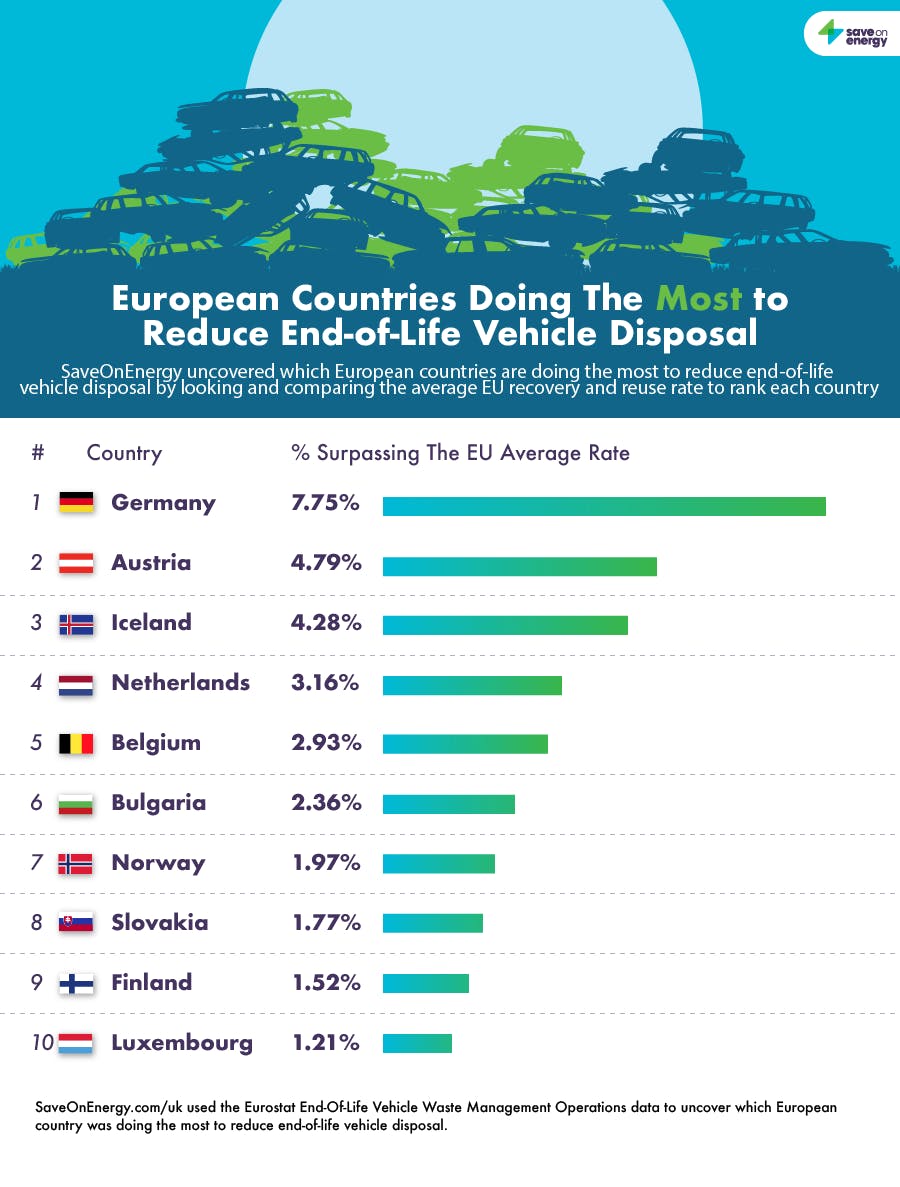 Having one of the largest scrappage schemes in Europe, it’s no surprise Germany comes out top in our list with an overperformance rate of 7.75%. The German government rolled out the scheme of retrofits and vehicle scrappage in January 2009, and it was promptly backed by a whole host of manufacturers including BMW and Daimler, the parent company to Mercedes.

As one of the most eco-conscious countries in Europe, Austria was always going to be found near the top again with a recovery/reuse rate of 4.79% above the average. In April 2009 the Austrian government introduced a scrappage scheme for cars older than 13 years, which saw over 300,000 new but smaller and more energy-efficient cars registered off the back of this scheme in just a few months.

Iceland is sitting pretty in third when it comes to reducing end-of-life vehicle disposal, with a recovery/reuse rate of 4.28% above the European average. As a country existing almost entirely on renewable energy, it makes sense that not only are they nearing the top of our list, but are switching to electric cars just as effectively.

Coming forth on our list is the Netherlands with a rate of 3.16% above average when it comes to countries doing the most to reduce end-of-life vehicle disposal. Having polled high as a country most concerned about sustainable investments, it’s clear the Dutch are keen to see a greener future.

In fifth place is Belgium with a recovery/reuse rate of 2.93% above the EU average for end-of-life vehicle disposal. Having ranked at number two in 2016 for its waste recycling, the country has promised a fully recyclable, circular economy by 2050.

Which countries are doing the least to reduce end-of-life vehicle disposal? 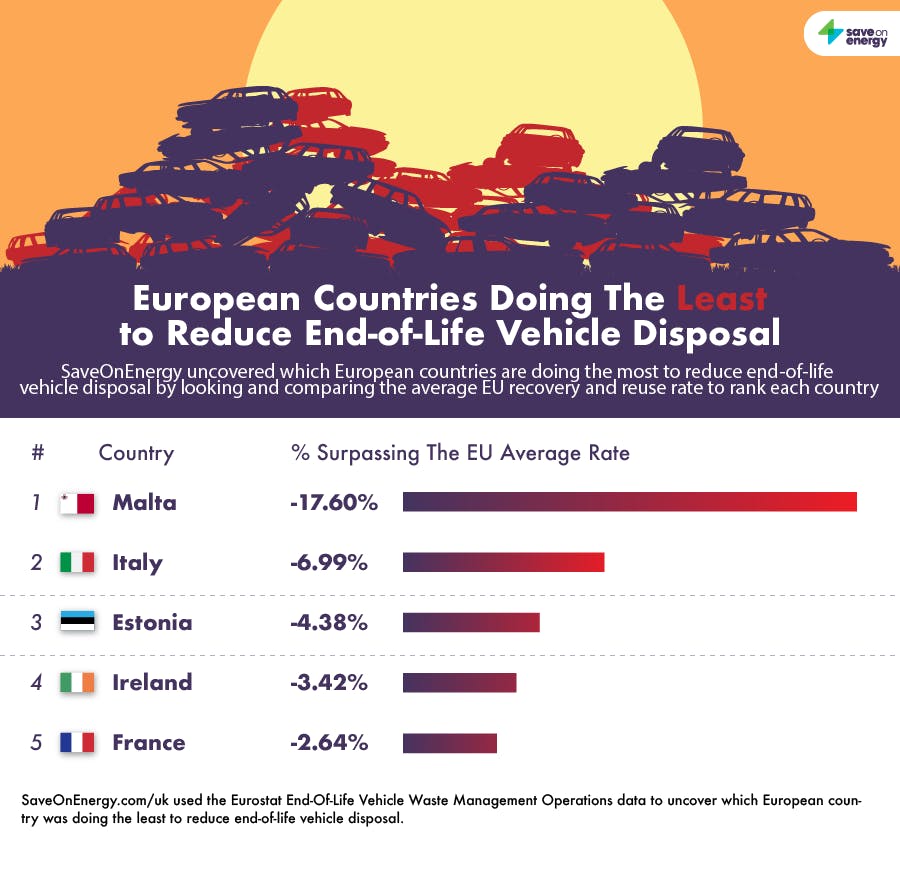 Despite being known for its stunning landscapes and historical architecture, Malta is seen as one of the least environmentally friendly countries when it comes to end-of-life vehicle recycling. With data only available from 2010 to 2016, Malta underperformed the EU recovery and reuse rate by an average of -17.60%.

Despite a popular car scrappage scheme being introduced in 2009, Italy comes second in our list for countries doing the least to reduce end-of-life vehicle disposal. With a recovery and reuse rate of -6.99% under the EU average, Italy has some work to do when it comes to being eco-friendly.

Estonia comes third with a recovery and reuse rate of -4.35% below the EU average for reducing end-of-life vehicle disposal. The Baltic state was one of the first EU countries to set up a nationwide network of recharging stations for electric cars, however, so clearly the government is trying to turn their transport industry greener.

Although Ireland ran the first-ever car scrappage scheme in the early 1990s, the Emerald Isle comes fourth on our list with an average underperformance rate of -3.42%. When a second scrappage scheme was introduced in December 2009, the government offered €1,500 for cars that were 10 years or older.

Fifth on our list is France, whose underperformance rate of recovery and reuse of end-of-life vehicles was -2.64%. When the car scrappage scheme was introduced in 2009, French car manufacturers used the scheme for new car purchases in Ireland so customers were able to cash in on the grants from both governments.

1. First, SaveOnEnergy.com obtained the Eurostat statistics about each EU country's end-of-life vehicle (ELV) waste management operations. Utilising this data, the tonnage of total waste generated along with the total tonnage reused and recovered was collected. 2. To calculate the total tonnage reused and recovered as a percentage of total waste, we divided the sum of the total reused and the total recovered by total waste and multiplied by 100. 3. To draw a comparison between the performance of each EU country, we compared each country's reuse and recovery rate to the average reuse and recovery rate across the EU for each year. This is done by simply subtracting each country's rate by the average EU rate for each year. 4. The countries were then ranked by the average performance rate. 5. All data was collected on 10/5/2021. Please note: Slovenia was omitted from the results for missing data for the most recent four years. Croatia was also omitted for not having data for the six earliest years. This made conclusions on their average performance insignificant.