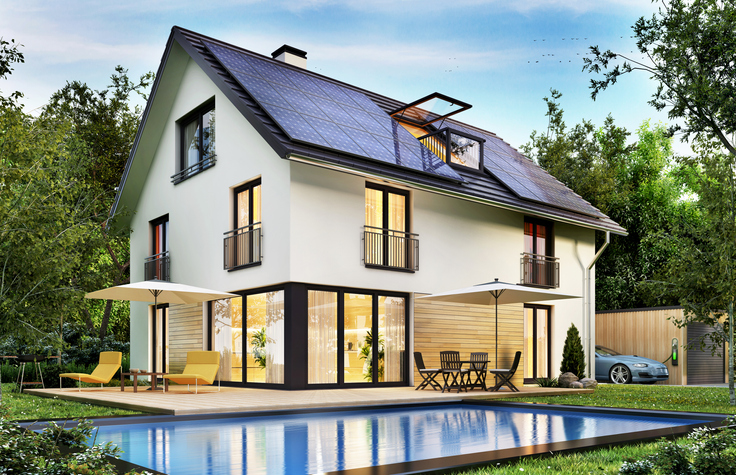 Solar panels can reduce your electric bills, boost your home value, and provide clean and renewable energy. But are they worth the investment? Understand the payback period for solar panels and maximize the return on investment.

What is the average payback period for solar panels?

A payback period is the amount of time it will take you to pay off the total cost of solar panels, particularly if you take out a loan to finance your solar system. Solar systems are typically built to cover most, if not all, of a solar owner’s electricity needs. If your solar panels cover most of your electricity needs, it significantly reduces your monthly electric bill. Your monthly solar loan payment replaces your electric bill until it is paid off. Most utilities compensate homeowners for the extra solar electricity they send to the power grid by providing credits to their electric bills. After your solar loan is paid off, you recoup the initial cost of your investment, and the ROI starts to increase because you will reap the full value of the system.

To estimate your solar payback period, you need to know the total cost of the solar system, incentives, and your monthly electric bill.

According to the Lawrence Berkeley National Laboratory’s Tracking the Sun report, the total cost of installing a residential solar system in the U.S. can range between $12,286 and $45,013, depending on its size. The costs for solar panels are measured in dollars per watt. The U.S.’s median residential solar system costs $3.82 per watt, and the median solar system size is 6.5 kilowatts (kW). The exact cost of solar panels will depend on your home size, energy use, electric rates, and roof condition. Your solar system’s exact cost might differ from the numbers above. To calculate the solar payback period, let’s assume your 6.5-kW system will cost $24,830.

You can claim the federal Residential Clean Energy Credit (formerly called the Investment Tax Credit). This incentive provides a 30% tax credit if you buy or finance a solar system through 2032. You can retroactively apply the 30% credit to systems purchased since the beginning of 2022. Here is the breakdown of how the ITC works.

Your total cost after claiming the ITC incentive will be $17,381. If the average residential monthly electricity bill in the U.S. is $133.24, you can divide $17,381 by that amount and then multiply it by 12 to account for one year of total savings. That will give you $1,560 of electric bill savings per year. Your savings will increase if your electric bill goes up more than the average $133.24 per month.

While the typical payback period for solar panels in the U.S. is six to 10 years, a return on investment on solar is difficult to quantify based on the unknown profit the solar buyer will have over the known investment cost. And the loan term could be longer based on the buyer’s payment plan.

According to a March 2022 SaveOnEnergy.com® survey among American homeowners, the solar payback period varies based on age groups. The survey found that millennial homeowners (32%) were more likely to pay off a solar loan of $20,000 within 3-5 years compared to 20% of baby boomers. Roughly 29% of boomers responded that they would likely pay off such a loan within 10-15 years. 17% of millennials reported that it would take them 10-15 years to pay off the $20,000 solar loan.

Because solar is a clean energy source, homeowners also see benefits that transcend savings. Relying more on clean and renewable energy sources means a healthier environment. And because energy costs continue to climb each year, homeowners will continue to see returns on their initial investment that will multiply over time.

As you can see in the calculation above, solar incentives can help you cut the total cost of your solar system. The federal Residential Clean Energy Credit program is one of the major incentives for homeowners. Until the end of 2032, homeowners can get a tax credit that is 30% of the cost of their solar panels. The federal tax credit will decrease to 26% in 2033, 22% in 2034, and fully expire in 2035. Individual states may also offer incentives, such as performance-based incentives (incentives that pay cash to solar owners for the number of kW generated by a solar system) and cash rebates. To further reduce your solar costs, it is important to research individual state and local incentive programs, such as rebates, property tax abatement, net metering, and solar renewable energy credits. Database of State Incentives for Renewables & Efficiency provides state-specific information on solar tax credits and other incentives.

How to maximize return on investment on solar panels?

The following factors can help you get the most out of your solar panels and maximize your savings.

Do solar panels add value to my home?

Solar panels improve the value of your home if you decide to sell it. In some states, the value of homes with solar panels can be higher than those without solar. The National Renewable Energy Laboratory, a clean energy research arm of the U.S. Department of Energy, estimates that a solar system that saves $200 annually can add $4,000 to a home value.