Do Solar Panels Work in the Winter? | SaveOnEnergy.com

Solar Panels in the Winter

Do Solar Panels Work with Snow on Them?

Do Solar Panels Work in the Winter? Does snow on solar panels stop electricity generation? How to keep snow off solar panels? Can solar panels freeze? What is the solar power output in cold-weather states? How to take care of solar panels during the winter Go solar today Solar energy by state 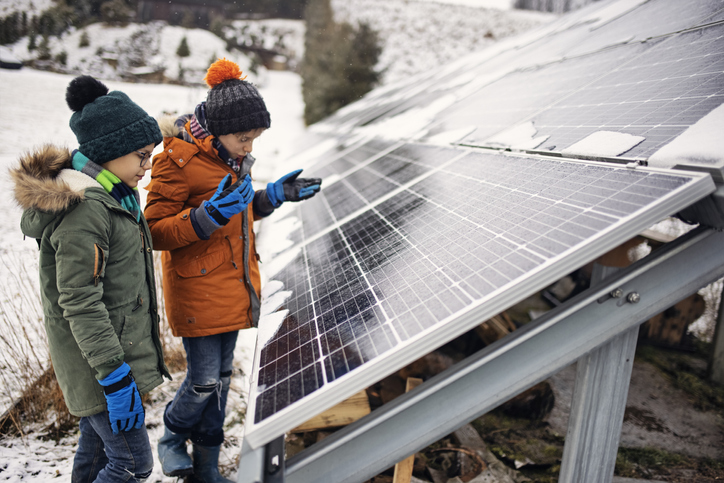 Do Solar Panels Work in the Winter?

A cold climate does not stop power generation from solar panels. Solar cells thrive in cold-weather states during the winter. But power production is generally lower during the winter compared to summer due to shorter days. Solar panels need sunlight, not heat, to produce energy. They make electricity even in sub-freezing temperatures as long as they face the sunshine. If solar panels perform poorly in cold and snowy regions, it is only due to their quality and installation. Weather elements during the winter do not reduce the quality, efficiency, and durability of solar cells. They have proven to work more efficiently at colder temperatures than during hot summer days.

For example, Massachusetts gets 197 sunny days on average, while there are 240 days of sunshine in Texas. Despite the colder climate in Massachusetts relative to sunnier states in the Southwest, it ranks eighth in the top ten solar states in the U.S. The Bay State currently has 3,380.6 megawatts (MW) of installed solar capacity, enough to power 552,186 homes. So, the gloomy weather in New England does not seem to dampen the solar energy generation there.

No. The presence of snow on solar panels does not stop electricity generation because solar manufacturers design their products to withstand different climates and weather elements, including snow, wind, hail, and rain. They test their panels for durability, quality, and efficiency before selling them. PV solar panels generate power in snowy and cold geographical areas of the U.S. The sun’s ultraviolet rays can reach solar panels through a thin layer of snow and continue producing electricity. Wind can quickly clear off light snow accumulation. But heavy snowfall can reduce power generation, at least, until the snow comes off from the panels. Rooftop solar energy systems are typically installed south-faced at a 30-45-degree tilt, which can help snow move down from the panels. PV solar cells also benefit from snow because it binds with dust and dirt and removes them from their surface as snow melts and boosts their efficiency. Dirt and dust are the most common culprits of reduced power generation of solar energy systems.

How to keep snow off solar panels?

It is best to wait for a heavy snowfall to slide off on its own instead of removing it because there is some risk of scraping and damaging rooftop solar arrays during snow removal. But if the snowfall is heavy and it takes too long for it to fall on its own, it is advisable to hire specialized solar snow removers who know how to work at height and use safe tools to get rid of snow.

Not all solar panels are created equally. Cheap solar panels will lose their efficiency faster than better quality ones. Some solar systems may freeze when snow melts and temperatures fall below freezing. Such conditions may cause cracking and fracturing of some panels. Many solar manufacturers build them to work and generate power under extreme weather conditions and low temperatures, some even as low as -4 degrees Fahrenheit (-20 degrees Celsius). Solar panels and their components undergo rigorous testing for the weight of snow and freezing temperatures before they are sold and deployed. It is essential to consult with a solar energy professional to choose suitable panels for your climate conditions.

What is the solar power output in cold-weather states?

Yes, solar panels work in cold-weather states. Solar panels are widely popular in some of the coldest areas of the U.S., such as New England, including Massachusetts, New Hampshire, Vermont, Maine, Connecticut, and Rhode Island. These states have over 209,000 PV solar panels with a cumulative generating capacity of around 4,000 megawatts. They have proven that not only can they generate solar energy, but their solar output has not lagged behind sunnier and warmer states. According to the ISO New England, a regional electricity transmission organization, existing solar installations in this region have cut the amount of electricity that the regional electricity system would have typically supplied.

How to take care of solar panels during the winter

Solar panels do not need much maintenance. Usually, snow moves away faster from the surface of solar panels than from the rest of the roof. Solar experts advise exercising patience and letting the snow melt and slide off solar panels on its own. Precipitation, such as snow and heavy rain, is good for solar panels since they clear away dirt and dust, improve efficiency, and increase power generation.

Winter and cold weather do not stop solar panels from generating electricity. You can be confident of the long-term return on investment from solar power systems no matter where you are located. If you think they are right for you, find more information here on all things solar.