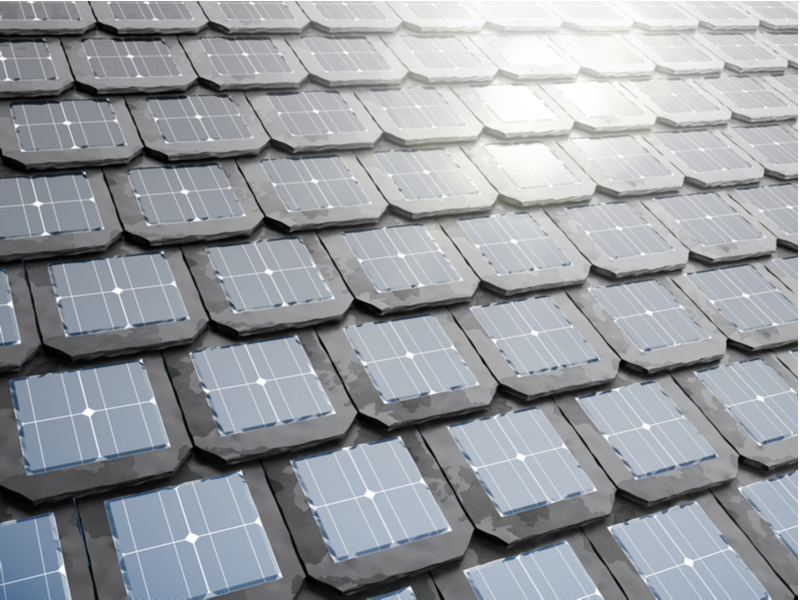 What are solar shingles?

Shingles and tiles can be a 2-in-1 product when they replace your roof and capture solar energy. However, some tiles and shingles are on top of your roof, similar to solar panels. For example, the Tesla Solar Roof is one brand of solar tiles that replaces your roof entirely, but not all solar tiles serve that function.

What is the difference between solar shingles and solar tiles?

Because a solar panel roof is built to the slope of your existing roof, it can be less efficient than solar panels. Solar installers can modify standard solar panels to different angles to make the panels most efficient for your home. You can also use a solar battery to save solar energy for off-peak times.

Currently, the cost of solar shingles and tiles is higher than standard solar panels. Solar panels cost between $15,000—$25,000. Brands like Tesla tend to be more expensive; however, they are doubling as your roof and a solar system. The price for solar shingles or tiles will depend on the size of your home and your energy use.

According to Modernize, “The average roofing installation price for a solar shingle roof costs anywhere between $60,000 to $75,000 depending on the slope, pitch, and size of your roof.” This equals roughly $21—25 per square foot.

Luckily, solar tiles and shingles still qualify for the Solar Tax Credit (ITC), which is a federal tax credit available for homeowners who install solar on their homes before 2022.

Are solar shingles worth it?

How do solar shingles work?

Solar shingles work similarly to standard solar panels. The shingles or tiles use a photovoltaic (PV) system to capture sunlight and convert it into electricity. If you’re trying to get solar panels on your home, but you have a roof that needs to be repaired or replaced, then solar shingles or tiles might be the perfect fit for your home. Solar shingles that serve as a roof and as a solar system let you replace your roof and get the benefits of solar energy all at once. This plan can save time and money versus replacing your roof and then adding solar panels on top of it.

Pros and cons of solar shingles

Other than the popular Tesla Solar Roof, there are a handful of solar tile and shingle options. We took a look at the top solar shingle options and ranked them by size, efficiency, and wattage.

What are the best solar shingles?

The Tesla solar roof consists of identical solar and non-solar tiles. The tiles are made of tempered glass and claim to be “three times stronger than standard roofing tiles.”

Luma is an upgradable shingle option that comes with a smartphone app for monitoring energy consumption. Luma solar shingles boast an impressive wattage per shingle and can withstand high winds, including hurricane-force gusts.

CertainTeed products only work with asphalt shingled roofs, so wood or metal roof owners may want to look elsewhere. The solar shingle system comes in a stock size of 14 monocrystalline cells with a standard 25-year limited-power warranty.

SunTegra is a low-profile shingle that installs without racking. Due to its lightweight design that needs 50% fewer parts than conventional solar panels, SunTegra may let you avoid extra building permits.

Does the pitch of the roof matter with solar shingles?

Does the amount of snow make a difference when choosing solar shingles?

Yes. Light snow does not affect solar shingles as much as a heavy downfall. According to Energy.gov, “A dusting of snow has little impact on solar panels because the wind can easily blow it off. Light is able to forward scatter through a sparse coating, reaching the panel to produce electricity. It’s a different story when heavy snow accumulates, which prevents PV panels from generating power. Once the snow starts to slide, though, even if it only slightly exposes the panel, power generation is able to occur again.”

Are there areas where Tesla solar shingles are not allowed?

Yes. There are areas of the country where it is not yet possible to get a Tesla Solar Roof. According to Inverse, “Tesla’s website accepts orders for its retrofit solar panels in 24 locations: Arizona, California, Colorado, Connecticut, Delaware, the District of Columbia, Florida, Hawaii, Illinois, Maryland, Massachusetts, Nevada, New Hampshire, New Jersey, New Mexico, New York, Oregon, Pennsylvania, Rhode Island, Texas, Utah, Vermont, Virginia, and Washington.”

Will I have to replace my entire roof to get solar shingles?

Possibly. Some solar tile manufacturers do not require a new roof because they are installed on top of your existing roof. However, some solar shingle systems will replace your current roof material.