How much do solar panels cost in Iowa? 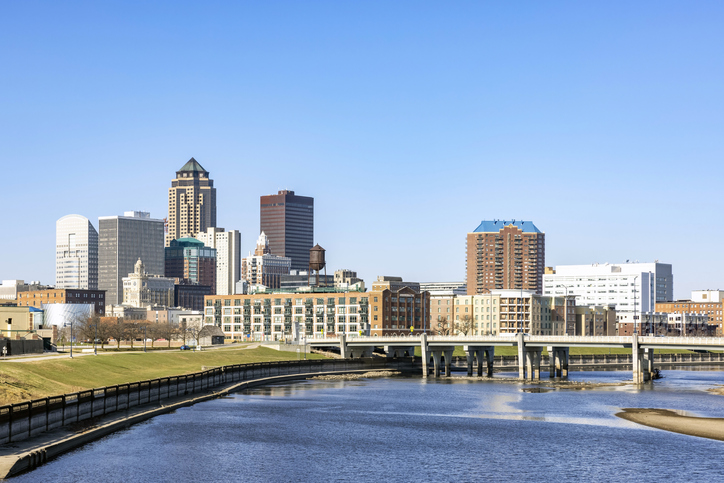 Solar energy is on the rise in Iowa. With more than $700 million dollars invested, Iowa has approximately 510 megawatts (MW) of solar power capacity and more than 8,500 solar systems installed across the state. Additionally, Iowa is home to more than 60 solar companies.

Solar power is a great option for any Iowa homeowner wanting to cut down on monthly energy bills and utilize renewable energy. As solar energy continues to expand in popularity, Iowans can also expect lower installation costs. In fact, solar panel costs in Iowa have dropped 50% in the last 10 years. Along with federal and state incentives that help homeowners offset some of the installation costs, installing home solar panels is becoming more affordable in Iowa.

The cost of a home solar system costs on average between $3-5 per watt. The total price of a solar system can range from between $11,160 to $46,500 before factoring in state or federal tax credits or rebates. There are several factors that impact the cost of residential solar systems, including the type, elevation, orientation, size and condition of your roof. Although some brands are more expensive than others, the panels themselves only account for about 30% of the total cost. The remaining costs come from permitting, inspection, wiring, mounting, and labor. The average time it takes to earn back your initial investment in energy savings is between six and nine years.

SaveOnEnergy can help you find solar options for your home. If you are interested in investing in solar energy, fill out the form below to receive a price quote from our solar experts.

Solar panels are a large investment, so there are several federal, state, and local incentives to make solar power more affordable and accessible. For example, there is a federal solar tax credit offering 26% of the total cost of a solar system back to the consumer. You are eligible for the federal tax credit if you install a solar system on your primary or secondary place of residence in 2022. The credit will drop to 22% in 2023 and is set to expire in 2024 unless Congress renews it.

There are several reasons why Iowa residents are turning to solar energy to power their homes. Solar technology has improved, the cost of solar panels has decreased, and traditional electricity rates have gone up. A major advantage of solar is the cost savings, but consumers are also drawn towards energy independence and environmental benefits.

Although installing a solar system in Iowa requires an initial investment, solar energy has proven to lower energy costs over time. Your monthly energy bill may be lower and in some states, such as Iowa, you can sell extra solar energy back to the power company through net metering programs. Traditional electricity rates have increased in recent years, leading Iowa residents to look for alternative power sources. Iowa tends to have some of the lowest electricity bills in the nation, but consumers could save more on energy costs by powering their home with solar energy instead of paying for electricity from the grid.

Homeowners who have installed solar systems take a step towards energy independence. Most solar panel owners choose to remain connected to the power grid so they can pull from the grid when their solar system doesn’t generate as much power. However, many consumers install a solar battery and store excess energy. During periods of high energy demand, you can use energy from your solar battery instead paying higher rates for power from the electricity grid. It is legal to live off-grid in Iowa, so you could choose to completely disconnect from the power grid with an off-grid solar system if you wanted to establish more energy independence.

Another benefit of switching to solar power in Iowa is that you get to begin the process of going green. Solar energy is a renewable resource that helps reduce the carbon footprint and environmental imprint of your home. On top of your personal clean energy changes, the use of solar energy has an overall positive impact on the planet. In fact, according to the U.S. Energy Information Administration, operational solar energy plants do not produce air pollution or greenhouse gasses unlike other energy sources. Through lowering pollution, solar energy can improve overall health and decrease unnecessary healthcare costs.

One option for obtaining solar energy is by signing a solar lease. Leasing may seem more affordable because of the lower upfront cost, but purchasing your solar panels outright will lead to the greatest savings in the long run. For example, solar panels can increase your home’s resale value by around  $15,000 dollars, which is not the case if you lease your system. There are also federal and state tax incentives that you cannot qualify for if you lease your panels.

Community solar, solar leases, and solar power purchase agreements (PPAs) expand the availability of solar power to families who cannot afford the upfront cost. With a solar lease, you pay a monthly lease payment which is usually less expensive than a monthly electric bill. Leasing accounts for about 28% of current home solar systems according to the Solar Energy Industries Association. Although you will save on monthly expenses, solar leases can last a couple decades and if you ever decide to sell your home, you will need to find a buyer who can take over your lease.

There are several different solar companies in Iowa that offer residential services. If you are considering installing a solar system in your home, SaveOnEnergy can help. We are an independent energy marketplace and partner with top solar companies offering customized solar options. If you are ready to connect with a solar installer in Iowa, fill out this form or call us at 866-420-6556.

The history of solar power in Iowa

Solar energy in Iowa has grown in the last decade. Currently the state has enough solar capacity to power more than 63,000 homes and is projected to add another 1,182 MW of solar capacity in the next five years. Iowa is no stranger to utilizing other renewable energy resources since passing the Property Tax Exemption for Renewable Energy Systems in 1978. Although wind is the most common renewable energy source, there are several solar farms in the state and over $700 million dollars has been invested into the solar industry. Iowa is ranked 32nd in the nation for solar power generation.

Residential solar energy works effectively when the solar system in your home can harness enough of the sun’s power to convert it into electricity. Although solar panels can work in almost any climate, not every home is well-suited to harness the solar power at optimal levels. Based on your location, you should research and consider the following to determine how effective solar panels would work on your home: