How much do solar panels cost in Florida? 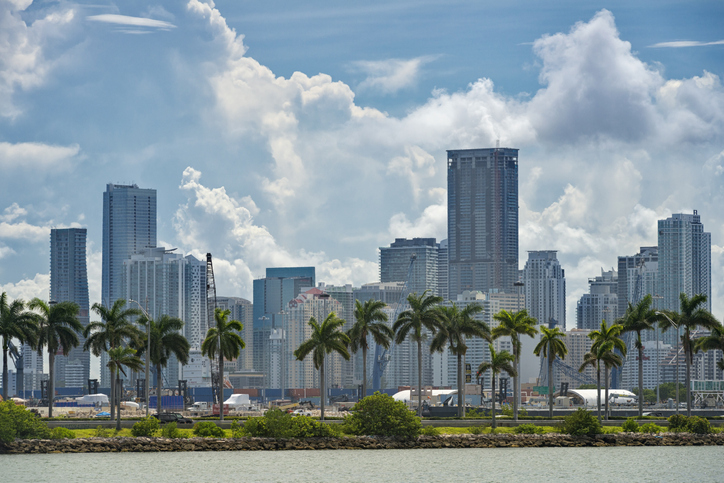 The self-described Sunshine State is unsurprisingly a wonderful place to invest in solar panels. Florida is currently ranked 5th in the country for solar energy generation. Despite the popularity of solar power in Florida, the state still has a lot of untapped potential. Florida hasn’t introduced many of the solar incentives and rebates that have become commonplace in other states. However, there are nearly more than 480 solar panel installation companies in Florida offering their services. And most Florida homes are great candidates for residential solar panels because of the amount of sun. This could allow Florida residents to produce most if not all of their electricity right at home.

The cost of solar panels has come down in recent years. Now, there is a greater interest from manufacturers, along with advances in technology and a decreasing price on materials. The cost of solar panels is normally expressed in dollars per watt of energy generated. An average home solar system costs between $3 – $5 per watt, with a total price tag of between $15,000 – $25,000. But this total cost is before factoring in solar incentives like the solar federal tax credit, which will reimburse you 26% of the cost of your solar system.

While the sticker price is high, investing in a solar system can create significant energy savings over time. The average payback period for a home solar system is between 6 – 9 years. Solar panels typically have a lifespan of between 20 – 30 years. This leaves most homeowners who buy Florida solar panels with decades of self-generated electricity after recouping their initial investment.

Interested in learning more about solar in your area? Fill out the form below to get started.

Incentives and rebates are some of the ways that governments motivate people to install solar panels in Florida. The upfront cost of solar panels can be offset by tax credits, rebates, and other Florida solar incentives.

Florida offers some solar incentives and rebates that can help you to lower the cost of your solar panel purchase. One statute established that sales tax wouldn’t be charged on solar panels, and various cities have special incentive programs for renewable energy generation in their area. Low-interest loans are available in some areas to spread out the costs as well.

Net metering is another Florida solar incentive that lets you sell back excess solar energy to the power grid, earning bill credits when your panels generate more energy than you use. Florida Senator Jennifer Bradley recently filed a bill (SB 1024) that would change the state’s net metering program and require participants to pay a surcharge to maintain the power grid. However, Florida residents who install a solar system before January 1, 2023 would be grandfathered into their previous compensation rate for the next 10 years. So, Floridians who are on the fence about purchasing a home solar system should make their decision before the end of 2022.

There are many reasons why residents and businesses in Florida are turning to solar power. Among the top factors include lowering energy costs long-term, increasing energy independence from the power grid, and improving their environmental impact.

One of the most practical reasons to opt into Florida solar power is that, over the life of the panels, the kilowatt-hours of electricity they produce are much cheaper. The upfront cost may seem daunting, but installing Florida solar power means you’ll generate your own electricity at no cost after your payback period. Considering the average electricity rate for traditional power in Florida, those who invest in home solar panels can save more than $900 a year in energy costs.

Increased independence from the power grid

Any time a power outage from a Florida hurricane leaves you without electricity, it’s tempting to become more energy independent. Many turn to Florida solar panels, especially those that have a solar battery installed, because it lowers their reliance on the power grid in order to have electricity. Surges in demand on the grid won’t impact your electric rates on your personal solar panel costs, and issues with the power supply will have less of an impact on your home system.

Many Floridians also want to have a positive impact on their environment. Solar panels are one way to reduce your environmental footprint, since your home is one of the places where you can have the most impact as an individual. Clean energy doesn’t emit carbon dioxide into the atmosphere, allowing you to reduce the greenhouse gas emissions that you create in a given year, all while saving on your electric bills long-term.

Should I buy or lease my solar panels in Florida?

Many consumers consider a solar lease, where a solar company installs solar panels on your home, you use the electricity in your home, and the company keeps ownership of the panels. You would be charged a fee every month to cover the lease of the panels. While the rate you pay may be lower than the conventional electricity rate in your area, there will never be a time when the leased panels are “fully yours.”

Buying solar panels outright, on the other hand, requires an initial financing choice: you’ll either need to search for a solar loan or pay upfront for the panels. Once you have made your purchase, however, every year that you use your solar panels moves you towards a return on your investment. Many people experience a return on investment within 10 years. And for those who sell their homes, the increase in resale value is normally around $15,000.

A third solar option that many communities are starting to offer is the chance to invest in a large offsite solar facility through a community solar program. Depending on the structure of the program, you may be able to secure a very competitive green energy rate for solar without having the upfront costs of a solar system on your own roof.

While Florida is known for sunny skies, it’s not without its cloudy days. Solar panels can still generate electricity on rainy and cloudy days. These days just produce a lower output, meaning they will not generate as much electricity. However, if your home is shaded by trees or never receives much sun, that will impact your solar installation’s effectiveness and the length of its payback period.

The state, age, and angle of your roof can also impact efficiency. By reading up on what makes solar panels work well, you can determine whether your home’s roof is a good candidate for solar panels in Florida.

Lastly, HOAs and neighborhood associations may have an approval process or regulations regarding solar panels, so go through all the appropriate channels before initiating this investment.

There are more than 480 Florida solar panel companies that offer installation for your home. Many of these Florida installers can customize a solar system that is ideal for your household. Begin your research into the solar industry with the guides and resources on this page. Once you know the basics of solar panels, finding the right Florida solar panel installer should be much easier.

Florida’s sunny weather means it is a leader in the solar energy production space, ranking fifth in the country. Recent growth in utilities who are investing in solar farms has brought the percentage of electricity generated by solar panels up to a little over 3%. This is strong growth but has room for improvement. TIA Solar is among the largest solar installations in the state, generating 1 MW or enough power for 175 homes, but big things are still in store – the state is poised to see even more growth in the solar sector in coming years.