How much do solar panels cost in Mississippi? 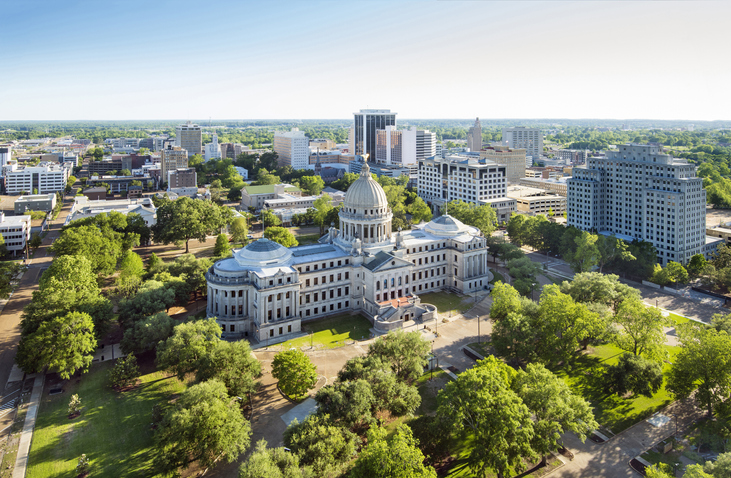 Solar energy in Mississippi is a growing industry. According to the Solar Energy Industries Association (SEIA), there are a total of 319.6 megawatts (MW) from installed solar panels in Mississippi. That’s a total of 598 installations in Mississippi, and 817 solar jobs in the state overall.

Mississippi has a majority of warm, sunny days throughout the year, meaning solar is quite viable in the area. Below, we’ll cover the benefits of solar panels, the costs of installing solar panels for homeowners, and ways to pay for solar panel installation in Mississippi.

The first step in deciding whether to invest in solar is to consider the cost since it can affect when you can get them or how you pay. This is an expense that affects your budget in the long run.

The cost of solar panels in Mississippi is measured by dollars per watt. According to Berkeley Lab’s Tracking the Sun report, a residential solar system costs $3.82 per watt, which totals about $24,742 for the entire solar array.

However, tax credits and rebates can help lower the price. The average solar panel payback period in Mississippi is six to nine years. However, you might look into federal tax credits, plus state and local incentives, which are often offered through the utility.

Currently, there is a federal incentive called the Residential Clean Energy Credit, which was recently implemented with the Inflation Reduction Act. If a homeowner purchases and installs solar panels on their residence in Mississippi, they could be eligible for a 30% tax credit on the cost of the system. This credit extends through 2032 and can even be retroactively applied to solar panels purchased in the beginning of 2022.

Mississippi as a state does not offer dedicated solar rebate programs at the moment. Make sure to check the Mississippi section of the DSIRE database regularly to see what is available, as programs can change, and there might be some Mississippi solar rebates and other incentives available down the line.

Mississippi does also offer net metering. This means that, depending on the local utility, you may be able to sell excess electricity generated by your solar panels back to the utility company. Mississippi adopted this legislation in December of 2015.

Lower energy costs are the largest draw of installing solar panels. Energy bills are only getting more unpredictable and do tend to increase over time, so grid independence can be a huge perk. Installing solar might also increase a home’s value since homebuyers in the market might consider added solar arrays a benefit.

Solar is also an investment that can help you save over time. The panels are expensive upfront, but when you finance them, you’re left with the savings from generating your own power.

For homeowners with a concern for the environment, installing solar panels in Mississippi is one of the most direct ways to help the environment and decrease dependency on natural gas. Solar is a renewable and green resource, meaning it doesn’t deplete natural resources and can reduce a household’s total carbon footprint.

Many consumers also choose to power their electric heating systems using solar, which usually proves to be a good choice for residents in the warmer Mississippi climate.

Should I buy or lease solar panels in Mississippi?

Buying solar panels instead of leasing them is your best option for long-term savings if you are able to do so. Installing solar panels in Mississippi has the potential to add $15,000 to your home’s value, according to the Office of Energy Efficiency & Renewable Energy.

Leasing can be a solid choice for many homeowners since it does allow more consumers to install solar. However, keep in mind that leasing might not lead to the same total savings over the lifespan of the panels as buying panels would. The incentives and rebates available to you might even be affected if you choose to lease.

The $25,000 investment into a solar system can be out of reach for many consumers. However, there are options to look into, like a shared solar program or community solar program in Mississippi. Community solar programs offer residents the use of solar arrays to power multiple homes. Residents can sign up for purchase plans or subscriptions and use the community solar array that way. If you’re looking to start smaller,  try looking into smaller-scale solar devices, like solar panels that fit on an RV.

If you’d like to do some more research, our solar guides can help you determine if solar is right for you. Solar needs to work for both your home type and energy use. You can find out more about green energy rates with our guide, as well.

Factors for how effective solar power for your Mississippi home can be include:

Check out our guide on how solar panels work to learn more.